These people suck. They are bad people.
Post Reply
1025 posts


During the 1973-75 Recession, beef prices skyrocketed, and residents — chiefly those of Connecticut, New Jersey, and New York, turned back to their old friend, horse meat. By this time, horse meat had been legalized for consumption — but only if no other type of meat was sold in conjunction with it.

Who ate horse meat? Not my family. Are you saying we were served surreptitiously?

Well, not everybody ate it. But many did, including my family.

When the beef prices spiked (33% price rise in 1979) horsemeat was available - at supermarkets in Tucson Arizona at least.

As far as I remember it was mostly minced hamburger meat, not steak cuts, though there may have been steaks.

Horse meat is perfectly tasty meat and is perfectly legal - as long as it is properly inspected just like every other meat. It isn't usually available because there isn't a demand for it, and the inspection process is relatively expensive compared to the demand.


Why It's Almost Impossible To Find Horse Meat In The U.S.
Shutterstock
BY RALPH SCHWARTZ/SEPT. 4, 2020 8:21 PM EDT
You won't find a horse tenderloin or tartare on the regular menu in any U.S. restaurant. Horse steak or ground horse patties cannot be found next to the beef and pork in your grocer's meat section. Why is horse meat not for sale in the United States? After all, it's not illegal to eat (via The Takeout). If you want to slaughter a horse, turn it into steaks, sashimi, or sausage, and serve it to friends and family, that's your business.

Here's the problem: Any meat sold in the United States must be inspected (via USDA), and the federal government has zero budget for inspections of horse carcasses.

Horsemeat WAS being inspected and sold in supermarkets. At least in Tucson Arizona. And I ate it.

I thought it was the 1960's but internet research suggest it must have been 1979.

Edit: tek found the evidence I was looking for in his post above

This is getting waaay off topic. So, I'll bring it back by channeling Bobo: How come there's no ham in hamburger? Because Libruls want to take away our gunz and make us eat Muslim food, and Muslims don't eat no pork. Protect your rights. Put the bacon back into my cheeseburger please.

For one metro area. No, people across the U.S. didn't turn to horse meat.

Off Topic
Sorry to continue the threadjack, but just because that link only cited one area does not mean it was restricted to that one area.

For one metro area. No, people across the U.S. didn't turn to horse meat.

Off Topic
tfg and horse meat:

Today, all the familiar contradictions of the American horse meat business are playing out again, as Trump looks toward horse meat as a cost-cutting measure. Ranges are overflowing with mustangs. Animal-welfare information has disappeared from government websites, and the administration is rumored to have called on the GAO to launch another study into the benefits of building domestic abattoirs.

And yet, without adequate funding for proper inspections in a reborn U.S. horse meat industry, the market might languish. Europe is already skeptical of Mexican and Canadian exports sourced from the United States, making horse meat less profitable anyway.

Forever marginal, always unsteady, the business of packing and selling the poor man’s beef could boom and crash again in America. If it does, Trump might find himself sporting a new political epithet: Horse-Meat Donny.

Definitive history of horse meat and the US at link: https://www.theatlantic.com/technology/ ... at/529665/

That would be Opossom wouldnt it?

Possum is available in some rural specialty shops in Aussieland.

Opossum is plural for a possum, ain't it?

That would be Opossom wouldnt it?

Possum is available in some rural specialty shops in Aussieland.


When times are tough I can't promise no one ever tried to pass off a squirrel in the stew.

Now you know what BoBo's restaurant was cooking.


Leave you hillbillies alone for five minute and you go all Lord of the Flies and shit...


Leave you hillbillies alone for five minute and you go all Lord of the Flies and shit...


Look, they did everything the grown-ups would have. What did they do wrong?

But the sunshine aye shall light the sky,
As round and round we run;
And the truth shall ever come uppermost,
And justice shall be done.
- Charles Mackay, "Eternal Justice"


Ron Filipkowski 🇺🇦 @RonFilipkowski wrote: “Guys, I’m pissed .. This is Gestapo crap, and it will not stand!”

The other day I realized it is way too easy to envision BooBoo doing a pole dance while holding an AR-15.

"A nation of law and order."

These tools dust off this trope whenever the Law and Order folks pursue a comrade of theirs. The FBI followed the law. The FBI obtained search warrants signed by a judge or magistrate.

Bobo, you need to clear up your ambiguity. You need to say, "We are a nation of law and order only when we don't like what the others are doing. Otherwise, not so much."

Law and Order = People of Color knowing their place

She's right, though ... the Gestapo was known for carrying away boxes of government documents.

Bobo's husband got in trouble trespassing on the neighbors land with his ATV. 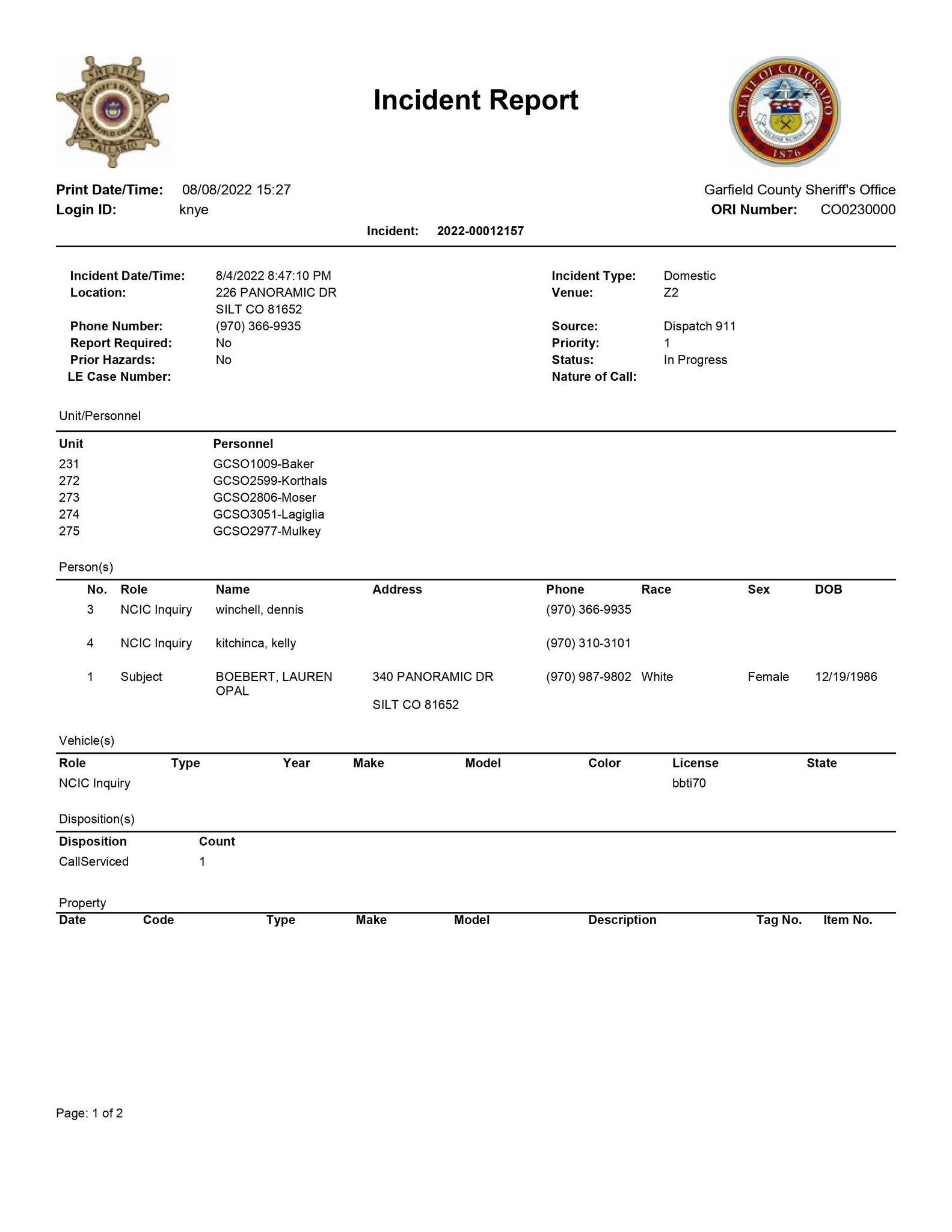 The report lists Boebert herself as suspect, not her husband Jayson!

That looks like she is the subject, not her husband. Do you have a link to the report or at least an image of the second page?

Have y'all noticed she talks using a lower voice register? Someone has been taking some voice training and buying different clothes so she "fits in" the "establishment".

I thought the gazpacho was known for being cold. That’s what Marge told me.

Deputies made no arrests, despite the reported threats and property damage. Representatives for Boebert did not reply to messages seeking comment.

The kids reportedly raced up and down the street and after the neighbors asked them to slow down “all hell broke loose,” a person described as “rp,” which typically stands for “reporting party,” told deputies. The congresswoman’s husband, Jayson Boebert, reportedly “threatened and yelled” at the person who called deputies “telling them to shut the f— up.”

Jayson Boebert “is looking to fight with everyone in neighborhood,” the reporting party told police. He “claimed someone took a swing at his son.”

The documents also make note that Jayson Boebert is the congresswoman’s husband and at some point, they indicate that someone ran over the mailbox of the person who called deputies.

Return to “Worst of the Right-Wing Pieholes”