Then there's Kemp, I have a litany of profanities I'd use to describe how much I loath his very existence wasting or precious oxygen, so naturally Dems are gearing up to oust him. Back in 18 Ms. Abrams lost by 1%, and she's expressed publicly that she might take another crack at the statehouse. However she is expected to have a challenge in the primary from Mayor Bottoms [ATL], who's had public spats with Kemp over his pandemic response [the complete lack thereof], and has a statewide profile for it, and many feel that when she turned down a position in the Biden Admin [rumor is Sec of H&UD] was the signal she wants a shot at the statehouse. The bellwether will be her re-election bid in NOV as her challenge for the mayoral seat is the President of the City Council, who's gonna hammer her over public safety as violent crime has gone up during Mayor Bottom's tenure.

In the end I don't care if the GA Dems run the corpse of James Buchanan, I'd vote for it to run the state over Kovid Kemp.

As long as either Abrams or Bottoms is the nominee, I'm good.

In fact, seeing those two debate in a primary race would be highly educational and cool.

Gazer Into the SovCit Abyss
Top

Mayor Bottoms drops out of her re-election bid, not sure what to make of it as far as her possibly running for the statehouse...

We are NOT going back! - Nancy Pelosi
Mood: injudicious
Top

Give her all the moneys.

More good news from Georgia. Democrats won big in local races and took many seats in smaller local races. This is where it starts. This is why the minority is currently setting policy what we all live with, because they have been laser focused on local races as well as national. I know this is a bit off-topic, but we won't hear about this on the news unless we live in Georgia, and we need to have some good news.

There's a lot of things that need to change. One specifically? Police brutality.
--Colin Kaepernick

Wow. Just, wow. Laying EVERYTHING on Kemp, even his own loss

lil reminder of Perdue's performance at the debate:
► Show Spoiler 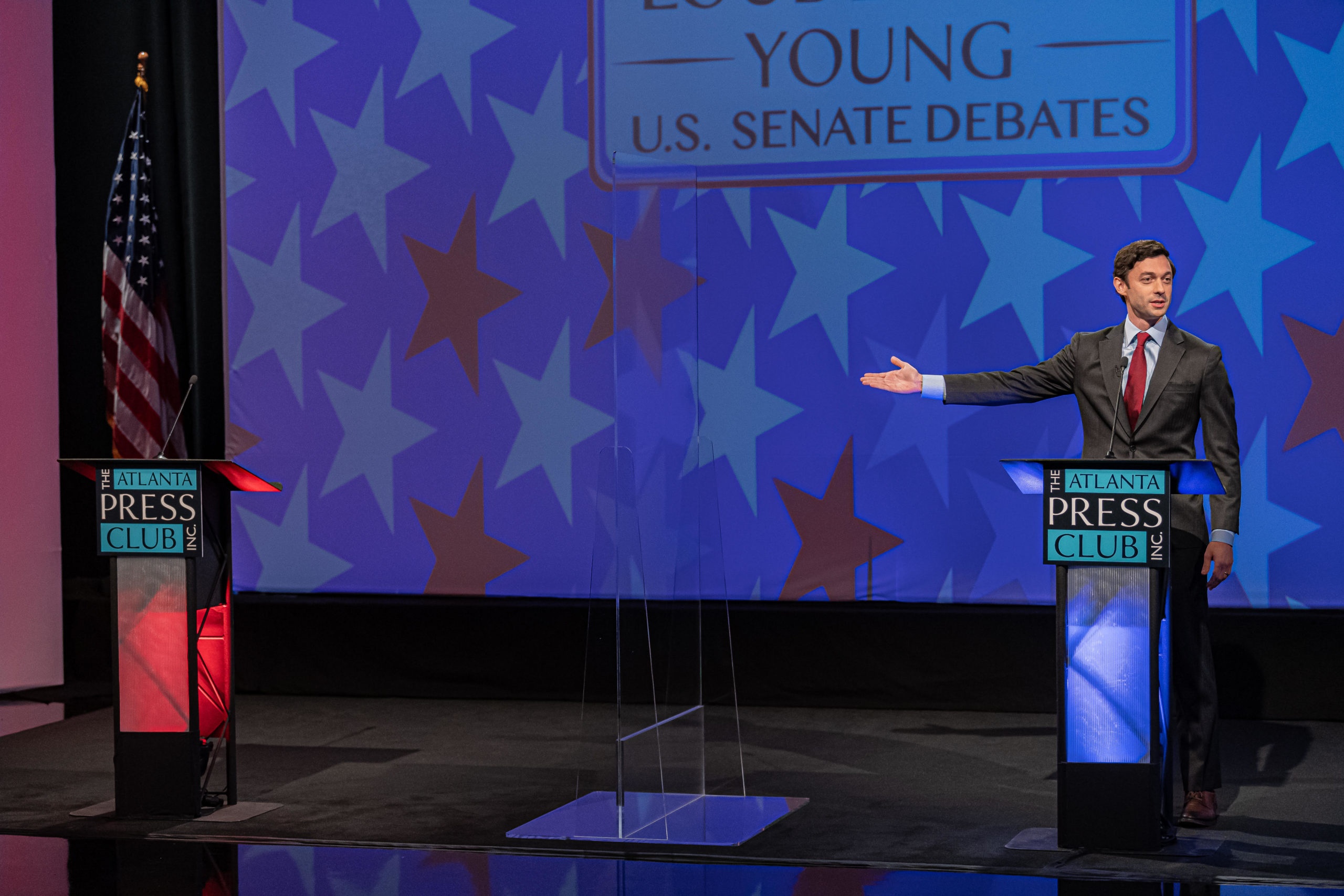 Former Sen. David Perdue’s entry into the Georgia governor’s race against incumbent Brian Kemp is a “disaster” for the Republican Party that will likely lead to the election of Democrat Stacey Abrams, says a veteran GOP strategist.

And the strategist, Scott Reed, blames the development on one man: Donald Trump.

“What did [Trump] say a month ago? He thinks Stacey Abrams would be a better governor than Kemp. Well, guess what? He may get what he wanted,” said Reed in an interview on the Yahoo News podcast “Skullduggery.”

“Because by getting Perdue in this race, you’re going to split the party,” he added. “It will be a circus — worse than it was in January when we lost those two Senate seats. ... It’s a disaster. I’m shocked Perdue is doing this. He’s being used by Trump. And we could lose a governorship.”

Perdue announced his run this week and was immediately endorsed by Trump, who praised him as a “conservative fighter” who will push to “secure the elections” — a reference to Kemp’s failure to endorse the ex-president’s claims of election fraud in the state. As if to underscore Reed’s comments, a new poll shows Georgia Republican voters split down the middle on the race, which offers some encouragement to Democrats.

I wonder if this will come up during the campaign.

‘This has been happening for a long time’: Modern-day slavery uncovered in South Georgia
https://www.ajc.com/news/this-has-been- ... CB3GQ66BQ/


Victims include over one hundred laborers smuggled from Mexico and Central America into “brutal” and “inhumane” working conditions. Under the threat of gun violence, some were allegedly forced to dig for onions with their bare hands, earning only 20 cents for each bucket harvested. At least two people died on the job. Another was allegedly repeatedly raped.

When not out in the fields, workers were detained in work camps surrounded by electric fencing, or held in cramped living quarters, including dirty trailers with raw sewage leaks. There was little to no access to food or safe drinking water.

According to the indictment, laborers were charged unlawful fees for transportation, food and housing. And though they were putatively hired for agricultural work, some migrants were illegally used for lawn care, construction, and repair tasks. To prevent escapes, members of the accused crime ring unlawfully confiscated workers’ passports and documents. Conspirators also sold and traded workers amongst themselves, per the indictment.

You can't wait until life isn't hard anymore before you decide to be happy.

I can't remember where I saw it yesterday, but someone supposedly in the know said that Perdue absolutely did not want to be governor of Georgia, but was pushed into it by the former guy. He was a lousy campaigner for the Senate; he's likely to be a lot worse for a job he really doesn't want.

These kids and their gang signs. I dunno if it is white power or threeper or what. Definitely not friendly.

Newsmax @newsmax wrote: "Star Trek" fans were surprised when they tuned in to the season 4 finale of "Star Trek: Discovery" Thursday and saw Georgia Democrat gubernatorial candidate Stacey Abrams making a cameo as President of the United Earth. https://bit.ly/3CThHJG

"Star Trek" fans were surprised when they tuned in to the season 4 finale of "Star Trek: Discovery" Thursday and saw Georgia Democrat gubernatorial candidate Stacey Abrams making a cameo as President of the United Earth.

Newsmax @newsmax wrote: "Star Trek" fans were surprised when they tuned in to the season 4 finale of "Star Trek: Discovery" Thursday and saw Georgia Democrat gubernatorial candidate Stacey Abrams making a cameo as President of the United Earth. https://bit.ly/3CThHJG

You'll be surprised to find out the National Review has a problem with this casting. I assumed this was tongue-in-cheek, but... it's not.

Stacey Abrams Does Not Deserve to Be President of Earth

Jim has covered the Star Trek criticism, so I’ll focus on Stacey Abrams. Abrams is, at this time, most famous for losing the 2018 Georgia gubernatorial election and then proceeding to deny she had lost it, behavior that Georgia secretary of state Brad Raffensperger has convincingly argued is morally indistinguishable from — and helped set the stage for — former president Donald Trump’s behavior after the 2020 presidential election.

And earlier this week, Matt Mashburn, a member of Georgia’s state elections board, argued that the House January 6 Committee’s decision to pursue the legal argument that those who argued the 2020 election did so knowing this was false and then raised money off of it anyway are guilty of fraud should make Abrams, who has profited handsomely in her own way from her election denial, nervous. As Spock once said, sauce for the goose.

Would Star Trek ever dream of making Donald Trump “President of Earth”? And I don’t mean in the way that the evil genetic superman Khan Noonien Singh once despotically ruled one-quarter of earth’s population. In classic Trek fashion, Abrams is shown as the logical and inevitable result of the kind of technocratic progressivism that the show has long advanced, a fruition of our highest ideals. Her behavior in the political sphere does not seem to bear this out. Apart from the election denial, there was this infamous photo, showing her reveling in the disparity of being maskless while surrounded by masked children. Given this, why hold her up as a model?

Then again, this is not the first time CBS has given a platform to an election-denying sore loser.

https://www.nationalreview.com/corner/s ... -of-earth/
A lot of snarky links embedded in the article, you can check them out at the original if you are interested.

Nobody cares. It doesn't have to be true. All that matters is the outrage the alternative facts garner.

A Georgia judge has dismissed a lawsuit filed by former U.S. Sen. David Perdue that alleged fraudulent or counterfeit ballots were counted in the state's most populous county during the 2020 general election.

Perdue filed the lawsuit, along with an individual voter, in December a few days after he announced that he would be challenging Gov. Brian Kemp in the Republican primary. Among other things, the suit sought access to examine absentee ballots, saying that would allow the petitioners to prove that there had been fraud in Fulton County.

Investigators with the secretary of state’s office found no evidence to support the fraud claims, but that hasn’t stopped former President Donald Trump, Perdue and others from continuing to spread them.

No linky yet, but CNN reporting on air right now that Pence is going to support Brian Kemp.