I hope Orlylicious will change the thread title then.

The only three names I've seen definitively so far are Neil Young, Joni Mitchell, and Nils Lofgren. Although I have seen a host of smaller names and podcasts jump ship fo shure.

Don't ask this guy. He's still walking back his two votes for the Limo and Orange Hair.

Ping me not.
Top

Ping me not.
Top

According to Statista, Spotify has 172 million premium subscribers worldwide as of the second quarter of 2021. Even if a few hundred thousand users quit Spotify, that won't matter to them.

I've been meaning to check out Apple TV+, so I plan to sign up for Apple One which includes Apple TV+, Apple Music, Apple Arcade, and Apple iCloud for $15/month. I will drop my Spotify ($10/month) account. I mostly use Spotify so I don't have to go to all the work of sorting through the hundreds of CDs I've ripped and have on my Windows laptop and then transfer to my Apple devices.

Unless there's several major musicians who leave Spotify, I can't imagine that anything will really change at Spotify.

Thanks! Looked too quickly on the artists, went back and researched moar. Updated the title. Thanks again.

ARE YOU QUESTIONING OL' WIFEHORN??????

MN-Skeptic wrote: ↑Mon Jan 31, 2022 1:44 pm According to Statista, Spotify has 172 million premium subscribers worldwide as of the second quarter of 2021. Even if a few hundred thousand users quit Spotify, that won't matter to them.

Unless there's several major musicians who leave Spotify, I can't imagine that anything will really change at Spotify.

This is currently a US local issue, the remainder of the world could care less about the loss of some artist. Now if Bollywoood....

Rogan was forced to put out a conciliatory statement by something, so its hurting him somhow.

Mind you, any company that would pay him 100 million for exclusive access to his yammering needs its corporate persona examined.

Podcaster Joe Rogan says he was only seeking to have conversations with people who have "different opinions", in response to criticism that his podcasts promote virus misinformation.

I never heard of Joe Rogan until this.

Is he really worth $100 million? Seriously?

India Arie pulling her music from spotify over the Joe Rogan episode with uber racist Jordan Peterson discussing what it means to be Black.

Estiveo wrote: ↑Tue Feb 01, 2022 10:41 am India Arie pulling her music from spotify over the Joe Rogan episode with uber racist Jordan Peterson discussing what it means to be Black.

Joe Rogan wrote:Unless you are talking to someone that is like 100% African from the darkest place where they are not wearing any clothes all day and they've developed all that melanin to protect them from the sun, even the term Black is weird.

About 24 hours after apologizing and promising to “have all the pertinent facts at hand” when discussing the coronavirus pandemic, Spotify podcaster Joe Rogan tweeted and then deleted an incorrect story about the drug ivermectin.

The medication has become a cause in right-wing media circles and Rogan ― one of its biggest backers ― tweeted: “Well lookie here” along with a story claiming the drug was effective against omicron in a phase III clinical trial.

That turned out to be incorrect and the story was updated.

Although Rogan deleted his tweet, he did not issue any kind of correction or followup statement. However, his tweet was preserved online by several people, including CNN fact-checker Daniel Dale:

Trivia time: Nils Lofgren grew up in Bathysphere or wherever it is, went to a rival high school so I didn't know him, but I saw him play. A lot.

Here's her CNN clip they were reacting to:
► Show Spoiler 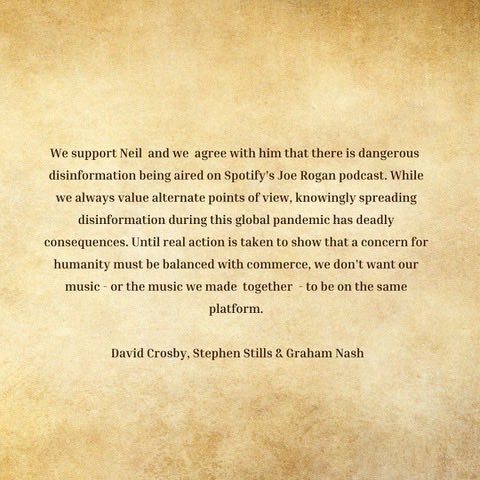 I lived in Bathyshere for a few years a street away from Nils home. We often chatted with him and heard him performing wherever he could get a gig. Then suddenly he took off. Nice guy.

You can't wait until life isn't hard anymore before you decide to be happy.

I’m not going to link it, but I just saw a video of Rogan dropping the n-word. Repeatedly. What a turd. As if I needed another reason.

Lofgren is one of SWMBO's favourite artists from the Grin days. He's probably second tier for me as a solo act, but gee whiz he has had an outstanding career.

I mean you can't get much better than the driver of Crazy Horse and the E Street Band.

I was gonna say producer too, but I guess he only did that for some of his own stuff.

This article explains it really well:

In one corner was Joe Rogan, the stand-up comedian and former Fear Factor host turned provocative podcaster. In the other stood Neil Young, the multi-Grammy-winning rock legend with a lifelong passion for progressive causes. The battle lasted two days, and Rogan won without making a peep.

Young started the scuffle when he posted a letter to his website Monday, addressed to his manager and an executive at his record label, demanding that his music catalog be removed from Spotify in response to “fake information about vaccines.”

Specifically, Young cited Joe Rogan -- who hosts The Joe Rogan Experience podcast -- and has suggested healthy, young people shouldn’t get vaccinated. After catching the coronavirus, Rogan also praised ivermectin, a medicine used to kill parasites in animals and humans that has no proven antiviral benefits. “I want you to let Spotify know immediately TODAY that I want all my music off their platform,” Young wrote. “They can have Rogan or Young. Not both.”

Two days later, without a word from Rogan, Spotify began the process of removing the famed rocker’s music, including his best-known hits such as “Heart of Gold,” “Harvest Moon,” and “Rockin’ in the Free World.” The speed of Spotify's decision to sideline Young was jarring. So why did the company do it? The answer is simple: This isn’t a story about Rogan or Young. It’s about Spotify. And, despite public perception, Spotify isn’t a music company. It’s a tech company looking to maximize profits.

And another thing, Joe Rogan is a birther. Or at least he was at one point. 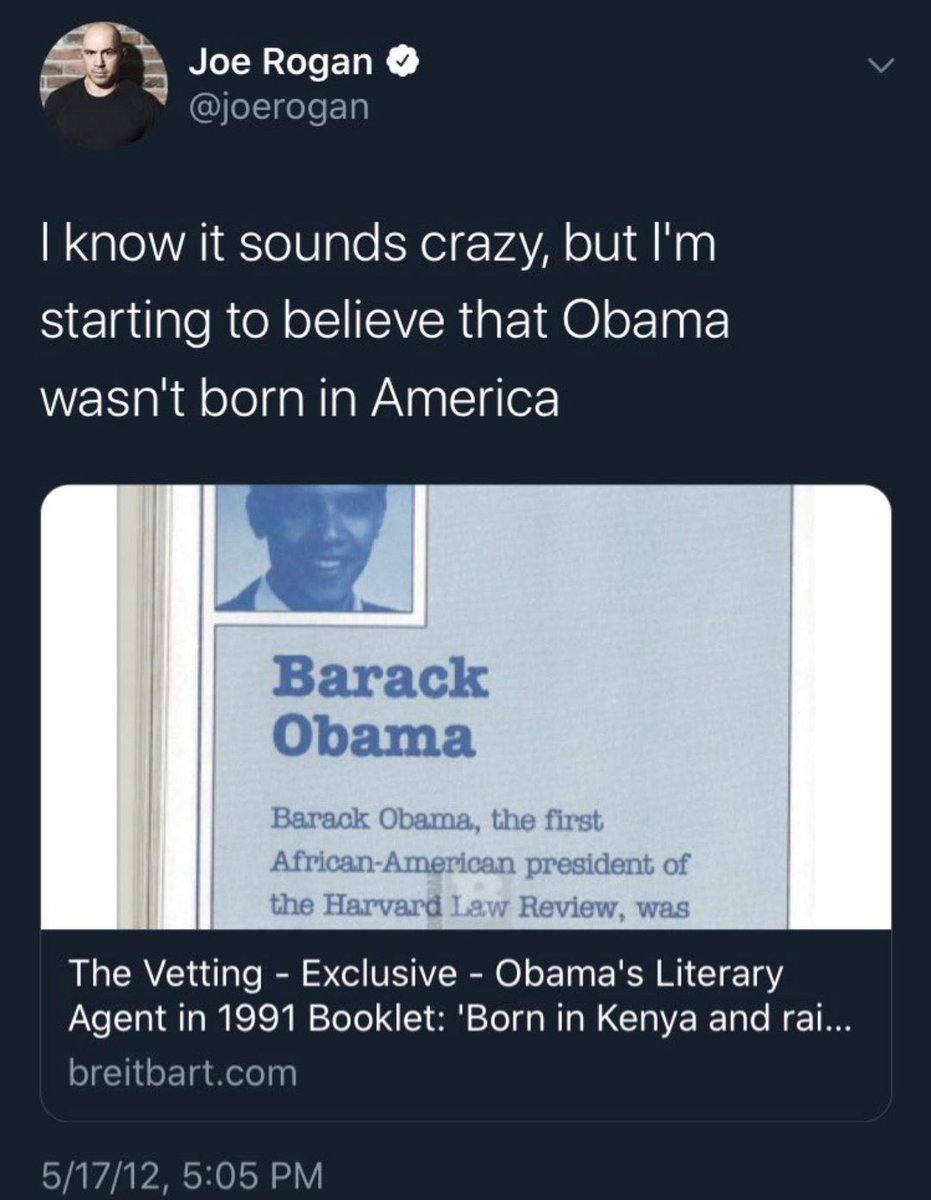 Are the Obamas leaving Spotify? Barack and Michelle are 'preparing to shop for a new podcast partner' amid frustration with the platform and outcry over Joe Rogan as their three-year-deal nears end
The Obamas are reportedly shopping around for new deals with other services
Sources say they're dissatisfied with the slow pace of production and Spotify's desire for more wide-reaching content
The duo Higher Ground Audio signed a deal with the streaming service in 2019
Since then, Barack and Michelle have hosted their own shows, though they haven't posted new episodes in months
The news comes as Spotify faces backlash over podcaster Joe Rogan's COVID-related content
By ADAM MANNO FOR DAILYMAIL.COM PUBLISHED: 00:24 EST, 4 February 2022 | UPDATED: 04:05 EST, 4 February 2022

The Obamas are said to be shopping for a new podcasting partner because they're frustrated with the slow pace of development at Spotify, where they're more interested in introducing new voices than on hosting shows themselves. Former President Barack Obama, 60, and former First Lady Michelle, 58, are looking at new deals with other companies, three podcast industry sources told Insider. The duo's Higher Ground Audio company signed a three-year deal with Spotify in June 2019, but sources say it can be hard to get a show green-lit at the Swedish music streamer.

Moreover, the Obamas are more interested in putting forth 'young new voices' rather than on carrying shows themselves, according to Vanity Fair, which first reported rumblings of the couple's dissatisfaction. The news comes as Spotify faces backlash over Joe Rogan, the most popular podcaster on the platform, over what some call his peddling of COVID-19 misinformation.

The Obamas are said to be shopping for a new podcasting partner because they're frustrated with the slow pace of development at Spotify. The Obamas signed a deal to 'develop, produce and lend their voices' to select podcasts to be featured on the music streaming service back in June 2019. Under the deal, Obama has hosted the eight-episode podcast Renegades: Born in the USA alongside Bruce Springsteen. It premiered on April 5, 2021. In July 2020, the Michelle Obama Podcast debuted with the former president as the first guest. The last episode was released on September 16 of that year.

Other podcasts produced by the Obamas include Tell Them, I Am, which features stories from Muslim voices, and The Big Hit Show, which premiered in January. The Big Hit Show is hosted by journalist Alex Pappademas. Its first season focuses on the impact of the Twilight book and film series. One source told Insider that it's possible the Obamas could renew their Spotify deal, though they now face stiffer competition than before as streaming services from Amazon and Apple have upped their investment in podcasts. Another source said that Higher Ground's pitches don't always align with Spotify's interest in popular, wide-reaching shows.

some call his peddling of COVID-19 misinformation

Return to “Computers and Internet”