The bitterest truth is more wholesome than the sweetest lie.

As the totally eclipsed moon was just poking up above the trees, a conga line of starlink satellites was passing straight overhead.

Ta-Da! Planets Align
One of the most anticipated celestial events of June is the rare alignment of planets that won't occur again until August 2040, according to AccuWeather.

A procession of planets — in order, Mercury, Venus, Mars, Jupiter and Saturn — will be visible in the predawn hours before the end of the month. The best date to mark is before 5 a.m. local time on June 24, when a crescent moon joins the planetary parade.

Best of all, the planetary alignment is visible without a telescope, though AccuWeather notes that Mercury may be hard to spot because it's the dimmest of the planets and will be the lowest in the sky.

The alignment begins around mid-month and will only be visible for about two weeks.


The Contreras Fire, which has been raging through the Arizona mountains since last week, has reached Kitt Peak National Observatory, threatening the site’s telescopes.

Kitt Peak National Observatory is an astronomical research facility located on the land of the Tohono O’odham Nation in the mountains of Tuscon, Arizona, and the observatory is run by the National Science Foundation’s NOIRLab — the National Optical-Infrared Astronomy Research Laboratory. Wildfires have been burning across the American Southwest recently, and the Contreras Fire has made its way to the observatory. NOIRLab said in a press release that the fire started as a lightning strike, while the mountainous terrain and high winds in the area have made firefighting difficult. According to the Arizona Emergency Information Network, the Contreras Fire has scorched nearly 11,500 acres as of June 16 with no signs of slowing. 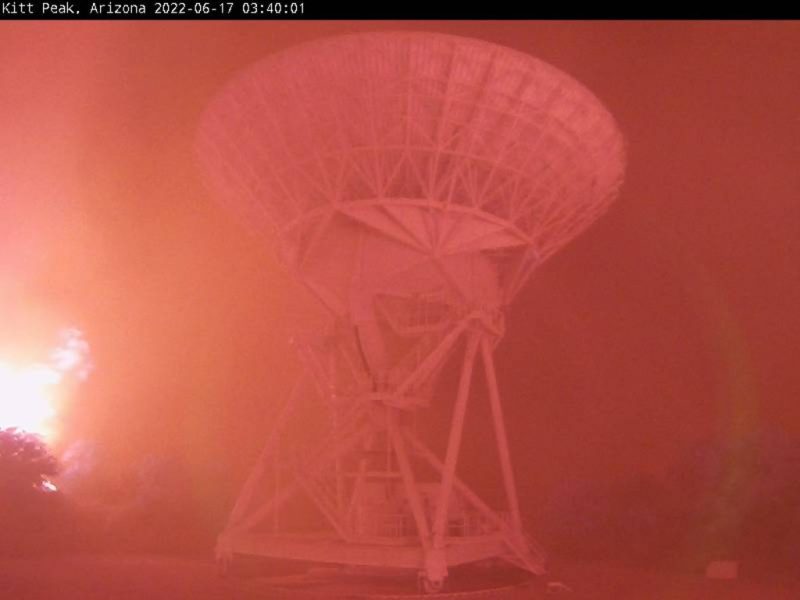 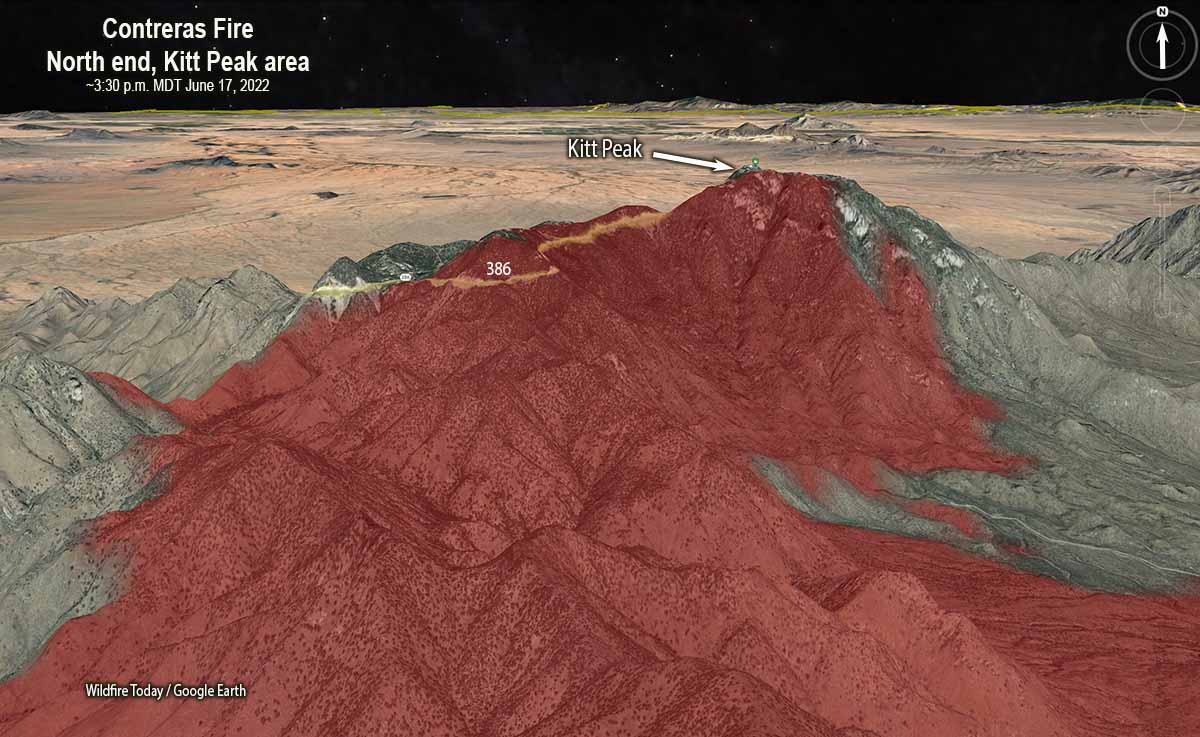 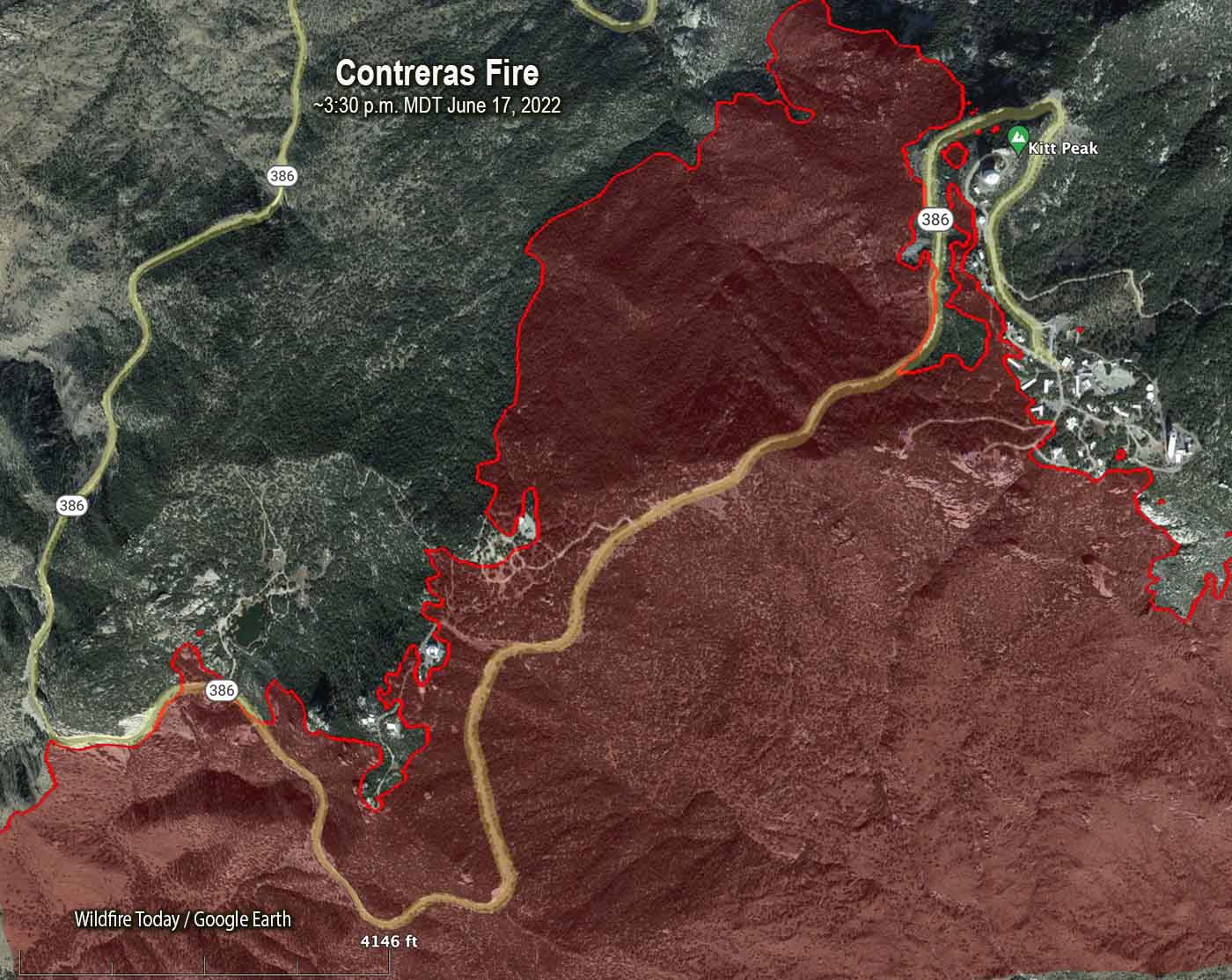 Looks like the Flying Spaghetti Monster is quite happy for mankind to explore the universe and piece together the finest details of his creation.

. Epic alignment of 5 planets, moon to peak after summer solstice

Epic alignment of 5 planets, moon to peak after summer solstice
Brian Lada
June 15, 2022·3 min read
A rare planetary alignment that won't occur again for nearly two decades has taken shape in the night sky, and while it will remain visible through the end of June, viewing the spectacle may be tricky and could require losing some sleep.

Mercury, Venus, Mars, Jupiter and Saturn have lined up in the early morning sky, a planetary procession that can be seen above the eastern horizon every morning through the end of June. This long-lasting event will give early risers plenty of opportunities to enjoy the sights of the planetary quintet.

The last time that all five of these planets were visible in the night sky at the same time was in 2004, the same year that Facebook was created and three years before the first iPhone was released, according to Sky & Telescope magazine.

A telescope is not required to see this month's unique grouping of planets, but it could still be difficult to spot all five, even if the weather is perfect.

The parade of planets will be best seen about 45-60 minutes before sunrise on cloud-free mornings through the end of the month. Since June features some of the earliest sunrises of the entire year, this translates to heading outside before 5 a.m., local time, to look skyward.

Astrange line of light appeared in the sky over southern Canada as a result of a huge, unexpected solar storm that hit Earth on August 7.

The bizarre sight appeared as the northern lights subsided, and lasted for around 40 minutes, according to a tweet from astronomy author and photographer Alan Dyer.

This aerial phenomenon is known as STEVE, which stands for Strong Thermal Emission Velocity Enhancement, and was first identified in 2016 by Canadian citizen scientists.


"Mickey Mouse and I grew up together." - Ruthie Tompson, Disney animation checker and scene planner and one of the first women to become a member of the International Photographers Union in 1952.

Solar Orbiter has made the first ever remote sensing observation consistent with a magnetic phenomenon called a solar switchback—sudden and large deflections of the solar wind's magnetic field. The new observation provides a full view of the structure, in this case confirming it has an S-shaped character, as predicted. Furthermore, the global perspective provided by the Solar Orbiter data indicates that these rapidly changing magnetic fields can have their origin near the surface of the sun.

While a number of spacecraft have flown through these puzzling regions before, in situ data only allow for a measurement at a single point and time. Consequently, the structure and shape of the switchback has to be inferred from plasma and magnetic field properties measured at one point.

At around 20:39 UT [March 25, 2022], Metis recorded an image of the solar corona that showed a distorted S-shaped kink in the coronal plasma. To Daniele Telloni, National Institute for Astrophysics–Astrophysical Observatory of Torino, Italy, it looked suspiciously like a solar switchback.

ESA’s Solar Orbiter has solved the mystery of a magnetic phenomenon in the solar wind. It has taken the first ever image of a ‘switchback’ in the solar corona, confirming its predicted ‘S’ shape. A switchback is defined by rapid flips in magnetic field direction. The observed switchback is linked to an active region associated with sunspots and magnetic activity where there is an interaction between open and closed magnetic field lines. The interaction releases energy and sends the S-shaped disturbance into space. The new data suggest that switchbacks could originate near the solar surface, and may be important in understanding the acceleration and heating of the solar wind. Credit: European Space Agency

Kewl video at the link. Sorry I can't transfer it.

This can't even be the right Universe, can it?

Don't touch anything! Look for a way outta here!
Anybody see an . Exit sign?
Mood: heretical

Before NASA's planetary defense probe DART self-destructs by slamming into the asteroid Dimorphos next week, it will offer views of only the sixth asteroid we will have ever seen up close.

Scientists are eager to get their hands on those images, as they admit that we know extremely little about the space rocks potentially threatening Earth.

Missions to asteroids are full of surprises. Almost two years before the Sept. 26 DART collision, NASA learned first-hand how unpredictable these space rocks can be when the OSIRIS-REx mission touched down briefly on asteroid Bennu to collect a sample. Against all expectations, the boulder-strewn surface of the 0.3-mile-wide (0.5 kilometers) asteroid was so soft that it nearly swallowed up the probe, sending shivers down the spacecraft controllers' spines and an enormous wall of debris up into space. With DART (short for "Double Asteroid Redirection Test"), NASA has sent a spacecraft to change the orbit of an asteroid, about which scientists know as little as they knew about Bennu before OSIRIS-REx's encounter.

DART is aiming for the 520-foot-wide (160 meters) asteroid Dimorphos, which is orbiting a larger, 2,560-foot-wide (780 m) asteroid called Didymos. From ground-based measurements, scientists know the speed at which Dimorphos orbits Didymos and have a rough idea about the larger asteroid's chemical composition. Dimorphos, DART's ultimate target, however, is a complete unknown.


Video at link too, also.

Be sure to play the video on the bottom tweet.

There's a lot of things that need to change. One specifically? Police brutality.
--Colin Kaepernick

A multimillion-dollar spacecraft collided head-on with an asteroid the size of a football stadium on Monday in an unprecedented test of Nasa’s capacity to defend Earth from a doomsday scenario.

Nasa’s craft successfully crashed into the asteroid Dimorphos 6.8m miles from Earth. The mission, known as Dart (Double Asteroid Redirection Test), marked humanity’s first attempt at moving another celestial body, with the goal of seeing if a large asteroid hurtling toward our planet could be successfully diverted.

The spacecraft collided with the asteroid at 15,000mph at 7.14pm EDT. Live-streamed video showed the asteroid’s rubble-strewn surface looming into focus before the spacecraft hit and cheers erupted in the mission control room. Teams of Nasa and Johns Hopkins University scientists hugged each other as Dart’s successful impact with Dimorphos was confirmed.

“[It’s] an era in which we potentially have the capability to protect ourselves from something like a dangerous hazardous asteroid impact,” said Glaze. “What an amazing thing. We’ve never had that capability before.”

Samson Reony, the Johns Hopkins applied physics laboratory mission commentator, was equally exuberant about the “game changing” achievement. “This is when science, engineering and a great purpose, planetary defense, come together, and, you know, it makes a magical moment like this,” he said.

The test aims to determine if intentionally crashing a spacecraft into an asteroid is an effective way to change its trajectory. A relatively similar strategy involving a nuclear missile rather than an unmanned spacecraft failed during a key point in the plot of Morgan Freeman’s fictional 1998 planetary disaster film Deep Impact.

That is SO AWESOME AND COOL.

Y'know, that asteroid is moving.

To hit it with a damn spacecraft ...

This can't even be the right Universe, can it?

Don't touch anything! Look for a way outta here!
Anybody see an . Exit sign?
Mood: heretical

Y'know, that asteroid is moving.

To hit it with a damn spacecraft ...

via remote control with a many second delay!

Thanks for the video.