Secure your house, yourself, and be ready for fire

All lights on in your house
Secure trans cans and any outside detritus that could be used as fuel or projectiles
Fill your bathtub with water, have your hose extended from the house, have a filled bucket ready to go
Charge fire extinguishers and know how to use them
Purchase fire extinguishers
Watch the wind, be aware of embers
Consider exit plans, pack a bag for emergencies
Create barricades, with cars or moveable objects that can be moved for emergency responders
If you have roof access use it for a good line of sight
Secure basement windows, they can be hit with projectiles and used to start fires
Move vehicles off the street- Share parking spaces so people can get their cars off the street
Secure outside valuables like bikes
Sleep on the first floor for ease of escape
Dirt works on grease/accelerant fires, too

Decide collectively if you will be using firearms
Work in shifts
Buddy system of at LEAST two people
We are specifically looking for armed white men with guns
We are specifically looking for people who are causing damage to housing
We are monitoring out of state plates and vehicles parked that don’t belong on the block
If you feel safe, engage with a question, “Where are you headed?”
Carry noisemakers
Wear long sleeves, close toed shoes, helmet
Making large signs that show we are human beings that live in our houses
Identify who has capacity to physically engage
Pets inside
Charge your phone, make sure you have the capacity to take video

Just let these words sink in for a minute my fellow American Citizens. This is our President.

Our country's racism has been stoked since 2017. The chilling effects Trump's messages have been to immigrants and DACA have been unconscionable. We *will* CHANGE & remedy this in 2021!

True Peter. @repjohnlewis, a real leader: "I know your pain, your rage, your sense of despair & hopelessness. Justice has, indeed, been denied for far too long. Rioting, looting & burning are not the way. Organize. Demonstrate. Sit-in. Stand-up. Vote. Be constructive, not destructive" 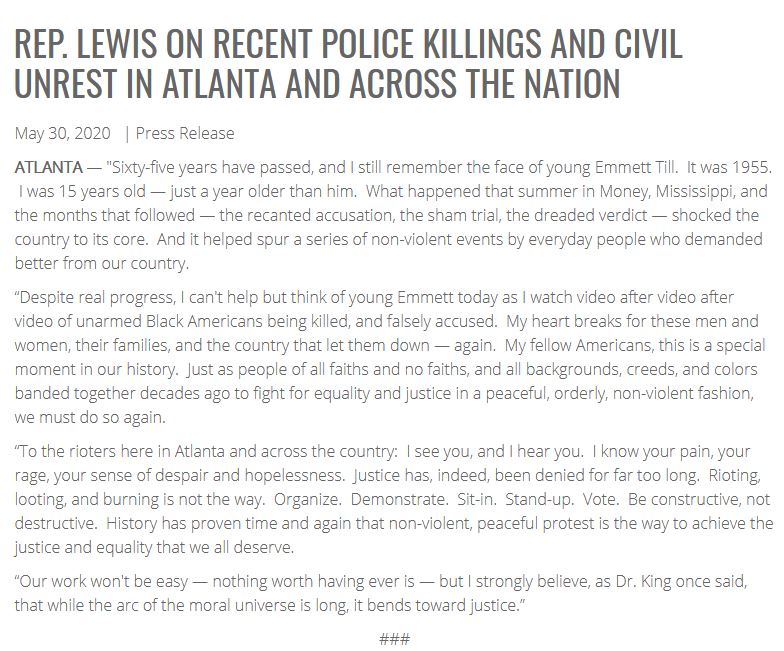 Thank you for this. 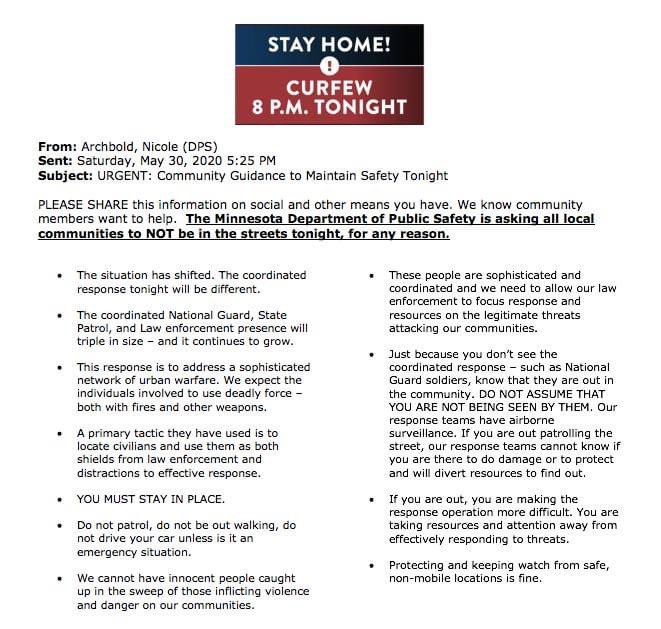 Rioting in Pittsburgh. Port Authority Transit shut down all buses and subways. Curfew.

UPDATE 9:00 p.m.: Gov. Tom Wolf announced that the Commonwealth Response Coordination Center, which is already activated at the Pennsylvania Emergency Management Agency (PEMA) for the state’s COVID-19 response, has added extra staff to maintain situational awareness for the protests happening around the state, including here in Pittsburgh.

Wolf said his administration has been in touch with counties throughout the day, offering any needed assistance.

"To argue with a person who has renounced the use of reason is like administering medicine to the dead." -- Thomas Paine
Top

Among the 1000s of other reasons, this is really at the core of why I can never support him:

Since day 1, he showed only wants to be president of his supporters and put up a barrier against the rest of the people. And he wants to keep that barrier intact. It's impossible to lead from that position, and in fact, the harder he tries, the more he becomes a follower.
Top

Just got an emergency alert on my phone. Shelter in place. Curfew.

This is how it starts:


Rachel Iacovone
@racheliacovone
·
3h
Replying to
@racheliacovone
Following a peaceful protest so far, a scene has erupted in front of the Metro Nashville Police Central Precinct after water bottles were thrown at a squad car and one protestor climbed on top of it.

I went out about 6pm to see how Bloomington was doing and what the Mall of America looked like.

On the way to the Mall, I crossed the Old Shakopee bridge over Cedar Avenue (MN-77). It's about 1 mile south of the Mall. There were two vehicles stopped on the side of the bridge with their doors open. EIGHT Bloomington police vehicles were stopped around them, lights flashing. I have no idea if the cars had anything to do with agitators, but I just found that to be so unusual.

Concrete barriers blocked entrances to the Mall and I saw two police cars patrolling in that area. I saw several more police cars out and about on my drive around town.

I really want things to just be quiet tonight in the Twin Cities.
MAGA - Morons Are Governing America
Top

D1DCCE2C-8FA1-4034-A3B4-F38F974D6F1B.jpeg
You do not have the required permissions to view the files attached to this post.
I am not "someone upthread".
Trump needs to be smashed into some kind of inedible orange pâté.
Top

Free lance journalist got shot by the cops with "tracer". Permanently blind in one eye according to her twitter. I started following her during MNWR - she did some good reporting on that.

Peaceful protest in Seattle earlier, which turned to burning vehicles and looting, including Starbucks, Nordstrom, and Old Navy. They showed live shots of people just inside the broken Nordstrom window tossing goods out to people on the sidewalk (perfume, designer handbags, etc.)

Live coverage here, although they are currently showing shots from earlier. https://www.kiro7.com/video/live-stream/
"Try not. Do or do not. There is no try."
-- Yoda
Top

This man was incredible, CNN turned it around already. Please watch these if you can.

Who has the authority to call in the national guard in DC? The mayor?
"Try not. Do or do not. There is no try."
-- Yoda
Top

Twin Cities media reporting that law enforcement had received intelligence that anarchist and accelerationist groups had intended tonight to take the action into residential neighborhoods. That is why they called in LEO from around the state and fully mobilized the National Guard. Current reports of incidents occurring in smaller cities in outstate Minnesota, LEO declining to provide details.
I've heard this bull before.
Top

Guy goes down to the protest. Apparently is yelling "all lives matter" at the protesters. Gets out of his car, takes a hunting bow and arrow out of his back seat, points it at a couple black people. Apparently fires one arrow (no one hit). He get's tackled and beat pretty good as the crowd swarmed him. Police come and get him out of there. Crowd flips car and sets it on fire. (Karma doesn't normally visit that fast)

Here's the interview he did with local news. He doesn't mention he was trying to shoot arrows, of course.

SLCPD didn't arrest him, but said they have his information and charges are pending.

Funny how his report taken by the breathless SLC reporters doesn't match the video.
"Try not. Do or do not. There is no try."
-- Yoda
Top

Site is back up… you can check the status of it here. Unclear if they regained access temporarily or if it'll go back offline
http://www.ci.minneapolis.mn.us

I just checked, it's up. But it's running behind Cloudflare with under attack status so there is an extra check to get in.
Top

I don't know who's supposed to have authority, but MSNBC said it was SecDef.

Are there any Esso Gas Stations near the White House?
Top

More about the no-plate cars. Twin Cities cops are spotting lots of cars driving around with no plates. Pull them over, occupants run away. Search vehicles, find materials inside suggesting they have been looting and/or planning to commit arson and similar acts.
I've heard this bull before.
Top