During a keynote speech on May 10, Elon Musk commended Tesla factory workers in China for working under conditions that break labor laws in many parts of the world — including those in China, as The Guardian pointed out.

The problem is that this disregard is not unusual in the country, even though China ostensibly doesn’t allow for such conditions. Chinese workers are officially not allowed to work more than 48 hours per week, including overtime.

During the lockdowns, workers at the Gigafactory reportedly worked 12-hour shifts, six days a week and slept on the floor. Again, that’s not only during recent lockdowns. This is actually common enough to be nicknamed “996.” That’s shorthand for work shifts going from 9am to 9pm, six days a week.

If you’re keeping count, that’s 72 hours per week. Musk has been known to brag about working 100-120 hour work weeks, and calling work meetings at 1am. So going by his own numbers, Chinese workers are not posting unreasonable work hours. And yet, the Gigafactory in Shanghai has seen numerous reports of labor rights and safety violations since 2018.

I have a hard time believing Musk does any actual 'work' an instead counts his 'executive time' as working.

Reminds me of when some idiot was praising China's response to Covid-19.

“Elon Musk has said his $44bn deal to buy Twitter may be in jeopardy due to a disagreement over the number of fake accounts on the social media platform.
Mr Musk tweeted that the deal "cannot move forward" unless Twitter backs up its claims that less than 5% of accounts are fake or spam accounts.
Twitter's boss has hit back at claims that the figure may be inaccurate.
Analysts have speculated that Mr Musk may be looking for ways to renegotiate the price of the deal or walk away.”

If you can't lie to yourself, who can you lie to?

How about those election auditors taking a count after eliminating bamboo'zeled accounts? I know a guy who needs some spare change to pay court fees...

Elon Musk has said his $44bn deal to buy Twitter may be in jeopardy due to a disagreement over the number of fake accounts on the social media platform.

We pump. We dump. We pump again.

Tesla is having a Bad Day.

Other contributing factors to the changes, effective May 2, included Tesla's lack of published details related to its low carbon strategy or business conduct codes, said Margaret Dorn, the organization's head of ESG indices for North America, in an interview.

Even though Tesla is contributing to reducing emissions with its electric cars, Dorn said, its issues and lack of disclosures relative to industry peers should raise concerns for investors looking to judge the company across environmental, social and governance (ESG) criteria.

"You can't just take a company's mission statement at face value, you have to look at their practices across all those key dimensions," she said.

Musk fights back whines like a the man-baby he is.

If Boebert agrees with you, perhaps you should reconsider your position.


Elon Musk @elonmusk wrote: In the past I voted Democrat, because they were (mostly) the kindness party.

But they have become the party of division & hate, so I can no longer support them and will vote Republican.

Now, watch their dirty tricks campaign against me unfold …

Lauren Boebert @laurenboebert wrote: Welcome to the right side, Elon!

Seeing speculation on the bird site that something derogatory may be coming out about him and he is trying to get ahead of it.

Musk is using Tesla shares as collateral for a loan for part of his offer, and it is unclear where the cash portion of his offer is coming from. It is likely that falling Tesla stock prices are going to screw up the aforementioned loan to some degree, as the loan is based on 20% of the value of the collateral.

I generally despise short selling, but in this case, I might be okay with it.

BTW Musk is a liar. What a surprise.

I used to defend this guy. A decade ago, but still. I didn’t know anything about him, just his carefully burnished public image. “He’s our only genius! Leave him alone!”

I apologize. Now, he’s another one I can’t even stand to look at, with his ridiculous moués (kinda like tfg) and his ego pulsing to the beat. 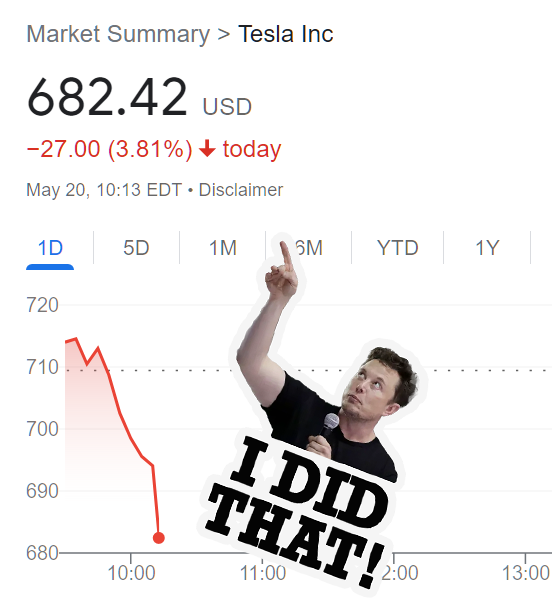 Not a good day for Tesla stock -

Hacker Finds Way to Unlock Tesla Models, Start Cars
A hack effective on the Tesla Model 3 and Y cars would allow a thief to unlock a vehicle, start it and speed away, according to the security firm NCC Group.
Bloomberg News | May 19, 2022

(Bloomberg) -- Tesla Inc. customers might love the carmakers’ nifty keyless entry system, but one cybersecurity researcher has demonstrated how the same technology could allow thieves to drive off with certain models of the electric vehicles.

A hack effective on the Tesla Model 3 and Y cars would allow a thief to unlock a vehicle, start it and speed away, according to Sultan Qasim Khan, principal security consultant at the Manchester, UK-based security firm NCC Group. By redirecting communications between a car owner’s mobile phone, or key fob, and the car, outsiders can fool the entry system into thinking the owner is located physically near the vehicle.

The hack, Khan said, isn’t specific to Tesla, though he demonstrated the technique to Bloomberg News on one of its car models. Rather, it’s the result of his tinkering with Tesla’s keyless entry system, which relies on what’s known as a Bluetooth Low Energy (BLE) protocol.

There’s no evidence that thieves have used the hack to improperly access Tesla vehicles. The carmaker didn’t respond to a request for comment. NCC provided details of its findings to its clients in a note on Sunday, an official there said.

Tesla in April acknowledged that “relay attacks are known limitation of the passive entry system,” according to NCC Group.

Khan said he had disclosed the potential for attack to Tesla and that company officials didn’t deem the issue a significant risk. To fix it, the carmaker would need to alter its hardware and change its keyless entry system, Khan said. The revelation comes after another security researcher, David Colombo, revealed a way of hijacking some functions on Tesla vehicles, such as opening and closing doors and controlling music volume.

BLE protocol was designed to conveniently link devices together over the internet, though it’s also emerged as method that hackers exploit to unlock smart technologies including house locks, cars, phones and laptops, Khan said. NCC Group said it was able to conduct the attack on several other carmakers and technology companies’ devices.

Kwikset Corp. Kevo smart locks that use keyless systems with iPhone or Android phones are impacted by the same issue, Khan said. Kwikset said that customers who use an iPhone to access the lock can switch on two-factor authentication in lock app. A spokesperson also added that the iPhone-operated locks have a 30-second timeout, helping protect against intrusion.

actually, no. It is a Personal Area Networking (PAN) technology that has nothing to do with the internet - which is apparently a set of tubes or something.

In my defense, I was left unsupervised.

Question: that tarp (silver, not blue) that they prepared on the road, would that have been a cover to contain a fire of the lithium batterie?

Anyone who wishes to do remote work must be in the office for a minimum (and I mean *minimum*) of 40 hours per week or depart Tesla. This is less than we ask of factory workers.

If there are particularly exceptional contributors for whom this is impossible, I will review and approve those exceptions directly.

Moreover, the “office” must be a main Tesla office, not a remote branch office unrelated to the job duties, for example being responsible for Fremont factory human relations, but having your office be in another state.


Subject: To be super clear

Everyone at Tesla is required to spend a minimum of 40 hours in the office per week. Moreover, the office must be where your actual colleagues are located, not some remote pseudo office. If you don’t show up, we will assume you have resigned.

The more senior you are, the more visible must be your presence. That is why I lived in the factory so much – so that those on the line could see me working alongside them. If I had not done that, Tesla would long ago have gone bankrupt.

There are of course companies that don’t require this, but when was the last time they shipped a great new product? It’s been a while.

Tesla has and will create and actually manufacture the most exciting and meaningful products of any company on Earth. This will not happen by phoning it in.

He asks more than 40 hours of factory workers? Huh.

Do Apple employees phone it in?

Leadership at many companies is recognizing employees can work effectively from home, minus the time and stress of commuting. I put in extra hours at home I can't afford when at the office. We go in two days a week, which is enough to keep us collegial.

Return to “Whatever Doesn't Fit Elsewhere”