Because he needs his own thread.
Top

Rudy Giuliani on Sunday said while he has no knowledge of President Trump’s personal attorney, Michael Cohen, paying any women in addition to Stormy Daniels, he believes Cohen would have done so if he deemed it “necessary.”

“I have no knowledge of that. But I would think if it was necessary, yes.”

TY for starting this.
Top

I had posted this in the Michael Cohen thread. I edited that post by deleting most of the text and referencing this post here.

Giuliani: Mueller may be going after Manafort because he thinks he will 'flip faster'
< I am unable to post the 38 second video at the link

"And of course [New York] developed that whole Cohen investigation and gave it away. Why did they give away Cohen, and not Manafort? Maybe they think Manafort's somebody they can flip faster," Giuliani said.

"This all plays into what my client, the president of the United States, has been saying for quite some time. The judge, in some substance, said this is a witch hunt," he added. "There's a tremendous amount of government misconduct attached to it."

Giuliani was referring to a judge's comments to attorneys working for Mueller's team on Friday, when the court suggested that Mueller's team was not truly interested in Manafort's finances. <SNIP>

Nunes wants to get rid of Sessions. Comments on Facebook suggest Sessions is part of mythical "deep state" and guess who should replace him? Roo-dee. He'd be GREAT.
Top

Is there someone in charge who thinks these interviews are a good idea, or is he just doing this on his own?

Do we have a train wreck emoji? If not, we'll need one.
Top

After a quick search heres 2 that might be suitable...

Not an emoji, but I kind of like this GIF. It has the majesty of the sinking Titanic and the crashing Hindenburg.

Thanks, Stern! I went looking for a clip but couldn't find one.

A lawyer who works and gives interviews based on rumours rather than first learning and categorizing the facts? First blathering in public aka lying and then goes to do his homework ???

I think it was :sterngard: who said "long past sell by date"

I liked that short snippet of Avenati. He seriously asked if he was getting played when they asked him about Rudy.

Wowza! That really was a joy to watch - but also horrifying. As in, as I was laughing with Joy et al, I had to to keep reminding myself of our trumpian era mantra - that this - the constant obvious lying & the ever shifting story - is not normal. Or at least it wasn't.

For as amusing as Sarah Huckabee Sanders (bless her heart) may be, please join me in imprecatory prayer for her health. Nothing fatal, nothing debilitating just something that keeps her home for a week or two leaving Rudy to take over her role at the daily podium as the press secretary.
RealScam.com
Top


Over the years, there have been few more vocal or aggressive advocates for law enforcement than Rudolph W. Giuliani. A former top official at the Justice Department, a onetime prosecutor with a tough, crusading style, and a police-embracing mayor who ran New York on a law-and-order platform, Mr. Giuliani — both in office and as a private citizen — has spent the better part of his career stridently defending the country’s crime-fighting class and fiercely lashing out at those who attack it.

But in his latest role as a lawyer for President Trump, Mr. Giuliani (who, like his client, is volatile by nature) appears to have made an abrupt change of course. In the past few days, he has launched a series of rants in the media, assailing his former colleagues in law enforcement — and the work that they have done — as Nazis, frauds and garbage. And in a phone interview Friday, he defended the strong criticism he had made.

While the path from prosecutor to defense lawyer is a common one that often requires a sharp shift in perspective, several former law-enforcement officials said they found it curious that Mr. Giuliani had so quickly and belligerently turned his back on a world he had worked in for nearly 30 years. Even some who expressed support for him said that his assaults on everyone and everything from the Russia investigation to James B. Comey, the former director of the F.B.I., to the bureau’s New York office, seemed to be out of character.

“It’s astonishing, especially from someone who has been so supportive of law enforcement for as long as he has,” said Asha Rangappa, a former F.B.I. agent who now works as a TV analyst and a senior lecturer at Yale University. “I can’t believe that anyone believes that he really believes what he’s been saying. But it’s a standard defense counsel playbook. When you don’t have the facts on your side, you attack the investigators.”

Are Rudy and Donald playing the baffle-‘em-with-bullshit game? Muddying the waters for weeks with the crap Rudy’s pulling right now - ‘I’m new, I’m still learning. But yeah, I think there were other women’ ‘No, that’s not what I meant/said’, turn part of it into a Dem-bashing meme and ignore the rest, pretend it didn’t happen.

I think that Rudy really believes it. Because in his mind anyone that disagrees with him is automatically evil and if the FBI is investigating the Golden POTUS, they must be evil.
bring out the tumbrils. I am so fucking filled with pain and anger at what is going on in this country. I do deeply believe that if trump somehow retains power it will be the end of democracy in this country and the end of this country as we know it.
Top

Giuliani seems to be making up stories as he goes along, a quality he shares with the President.

Giuliani has also cheated on his third wife, another quality he share with the President.
Top

Further to my comment above about Rudy, if you watched him at all during the campaign, he was completely unhinged then. I don't think anything has changed -- he a senile angry old man who still believes that he should be running the country and can't understand that history has passed him by. IMHO, he will go down in the history books not as America's mayor after 9/11 (for which he did nothing anyhow), but will go down as a senile angry old clown who is advising another senile angry old clown.
bring out the tumbrils. I am so fucking filled with pain and anger at what is going on in this country. I do deeply believe that if trump somehow retains power it will be the end of democracy in this country and the end of this country as we know it.
Top


SUMMARY: Rudy Giuliani's pattern of frequent and dramatic displays of widely opened eyelids in this video is a highly reliable nonverbal signal of insincerity.

The pictures of Rudy are hysterical.

Kate, your Ghouliani is perfect! 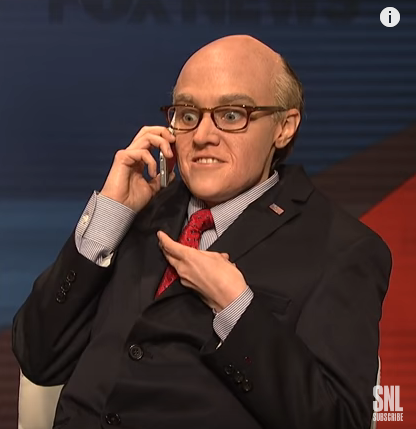 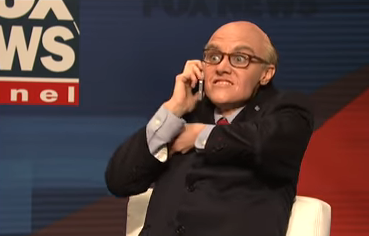