This should be interesting today. The appearances are virtual so probably won't have the same impact but it really doesn't matter, Congress will do nothing before November so it's just a little kabuki theatre for the banned RWNJs. Nothing will satisfy them so let's see if this was a good idea.


Jim Jordan Sells Out Conservatives to Big Tech (Read the Confidential Memo in Full)
Published 12 hours ago on July 29, 2020 By Mike Cernovich
Labelled “Confidential,” the Jim Jordan Memo is something you’re not supposed to see.

Cernovich Media has obtained this Memo and is posted it in full.

Highlights of Jim Jordan’s Antitrust Memo
The Memo gives Republican talking points needed to defend Google, Apple, Amazon, and Facebook.
The Jim Jordan Memo is clear. Zero antitrust action against Apple, Google, or Amazon will be supported by the GOP, and the memo is loaded with talking points defending Big Tech’s monopoly power.
“Even if this hearing suggests that Google, Amazon, Apple, or Facebook have acted unlawfully, that would not necessarily mean underlying antitrust law needs an overhaul.”

Four of the nation's most powerful CEOs are beaming into a Capitol Hill hearing at noon Wednesday to face one major question: Are their companies too big and powerful for America's good?

The virtual testimony marks the first joint congressional appearance by Facebook chief executive Mark Zuckerberg, Amazon's Jeff Bezos, Apple's Tim Cook and Sundar Pichai, the CEO of Google and its parent company Alphabet. It comes at a time of rising legal jeopardy for the major tech companies, who are the subject of antitrust and consumer-protection probes in Washington, multiple U.S. states and Europe — but also amid questions about whether Congress can provide a counterweight to the wealth and power of Silicon Valley.

More than a year of investigation by the House Judiciary Committee's antitrust subcommittee has yielded a host of documents about a litany of criticisms, any of which could come up during Wednesday's hours of questioning. Those include Google's and Facebook's dominance over the online ad market, Apple's efforts to compete with rivals on its own App Store, and questions about whether Amazon misled Congress about how it uses data it compiles from its third-party sellers.

Lawmakers will no doubt raise other issues as well. Republicans in particular have pushed for answers on what they call a pattern of anti-conservative bias on social media, a charge Democrats dismiss as a baseless distraction. The executives, meanwhile, are touting their companies as examples of American-style innovation and openness, and a bulwark against Chinese-owned competitors like TikTok.

Zuckerberg: Sir, i’m the CEO of Facebook.
FakeNews Fighter
@Latinaproducer
·
10m
Then that moron went on to defend propaganda that pushed a false cure for a drug proven to have deadly side effects for a large % of patients

ZUCKERBERG: That happened on Twitter, so hard for me to speak to that

@akarl_smith
Chaos in the hearing. Everyone starts shouting. Someone yells at Jim Jordan to put on a mask

Yeah Sensenbrenner bragged he's been in Congress for 42 years -- and that he's not coming back.


Not sure why CNN isn't carrying it, but the hearing is live on YouTube:

During tense questioning of Google CEO Sundar Pichai, Rep. Jim Jordan (R-OH) tried to get the executive to pledge that he will not allow the platform to act in a biased way against conservatives — a notion that Pichai assured Jordan has no merit.

After over 5 minutes of badgering Pichai and suggesting his company is carrying out an anti-conservative agenda, Rep. Mary Scanlon (D-PA) took her turn to question Amazon CEO Jeff Bezos, and started off her questioning with a slight dig at Jordan, accusing him of regurgitating “fringe conspiracy theories.”

If tech is going to "censor" these people, they could do a better job. They still show up all over social media. Go figure.
Top

Hmmm. My buddy left Disney to go run this, what a mess. This would be a political disaster for Donald, banning the hottest youth app? Go right ahead. 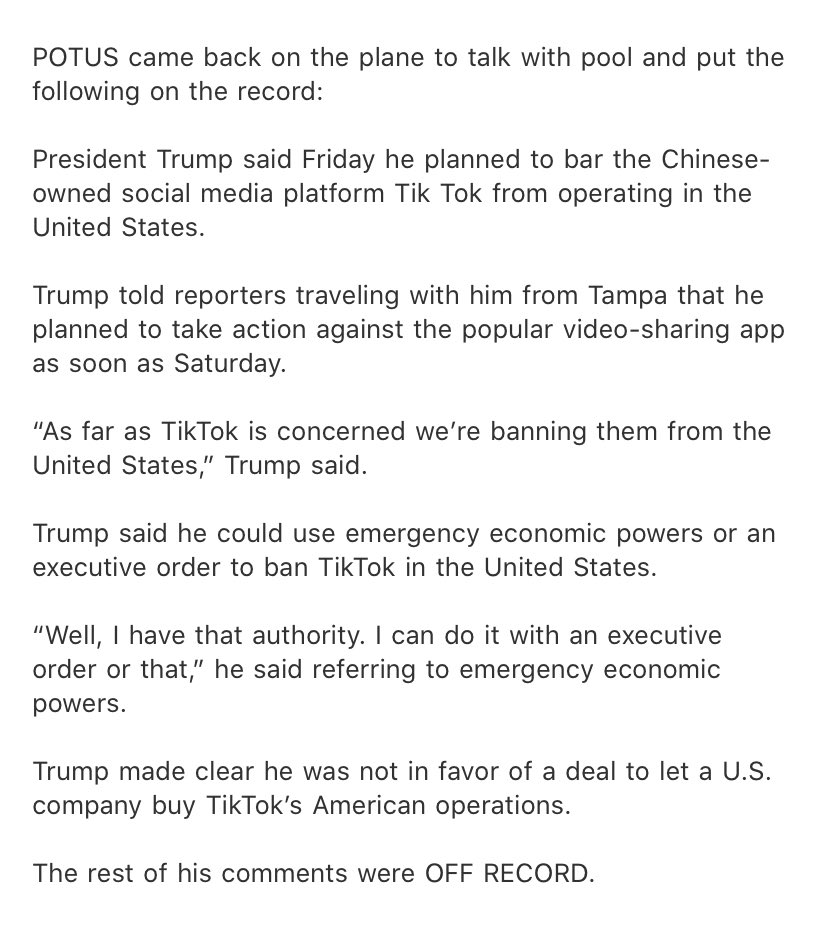 Sarah Cooper already. TikTok kids aren't going to be happy about this. And it must be that the baby is still mad about the TikTok ticket idea from Tulsa. If only he was as mad about Mr. 9-9-9 passing away.

He has to be trying to lose. Look at this US userbase he's just going to "ban".

Total App Downloads – The TikTok app has been downloaded over 2 billion times worldwide, as reported by Sensor Tower 0n April 29, 2020. In Q1 of 2020, the app had 315 million downloads, which is the best quarter by any app, ever. 500 million of those come from India, 180 million from China, and 130 million from the U.S. In June of 2020 TikTok was downloaded 87 million times worldwide (with 7.5 million of those coming from the U.S.).

Among U.S. over 18, TikTok brought in 22.2 million mobile unique visitors in January, 23.2 million in February and 28.8 million in March. In April, that number jumped to 39.2 million—three times the 12.6 million who used the app last April, according to the most recent Comscore data provided to Adweek (note – Comscore only tracks users over 18).

If this is the Bill Stepien era, welcome Bill. Banning TikTok.

individual-1 just made a promotion for VPN services

Pretty detailed article from CNet on TikTok and ways the US could or couldn’t restrict it. A MUST READ.


Trump targets TikTok: Everything you need to know
The president is reportedly considering forcing Bytedance, the owner, to sell the app or banning it outright.

Owned by ByteDance, a Beijing-based tech company, TikTok has drawn the attention of the Trump administration, as well as other parts of the government, because of concerns it scoops up information on Americans that could be turned over to the Chinese government. The US Army and Navy have banned service members from downloading the app to government-issued phones. Earlier this month, the US House of Representatives voted to bar the use of TikTok on all government-issued phones. The Senate is expected to pass the measure. Two senators have also requested the Department of Justice open an investigation of TikTok, as well as Zoom.

The US isn't alone in its concerns. India has already banned TikTok, and Australia is also considering blocking the app.

The rising concerns come as TikTok sees its popularity explode. The app has gotten a new boost from the coronavirus pandemic, drawing in people looking to escape the boredom of lockdown. It's been downloaded more than 2 billion times, according to research firm Sensor Tower, with 623 million coming during the first half of this year. India had been its largest market, followed by Brazil and the US. (TikTok isn't available in China, where ByteDance distributes a domestic version called Douyin.)

In a move that could smooth things over with some lawmakers, TikTok on July 22 said it plans to hire 10,000 people in the US over the next three years. The company said it would add roles in engineering, sales, content moderation and customer service in California, New York, Texas, Florida and Tennessee.

Crossposted
"[Moderate] doesn't mean you don't have views. It just means your views aren't predictable ideologically one way or the other, and you're trying to follow the facts where they lead and reach your own conclusions."
-- Sen. King (I-ME)
Top

Gym and others really don't care if they are censoring or not. They just need another "we're a victim of the liberals" soundbite.
North-land: of the family 10.5

Thanks for that. I was wondering what TikTok was, causing such a commotion.


Trump targets TikTok: Everything you need to know
The president is reportedly considering forcing Bytedance, the owner, to sell the app or banning it outright.

"The very least you can do in your life is to figure out what you hope for." - Barbara Kingsolver
Top
Post Reply
15 posts • Page 1 of 1