The long abandoned (since 1945) City Hall subway station in Manhattan. This was the 1st station. The 1st NYC subway train departed from here going north. 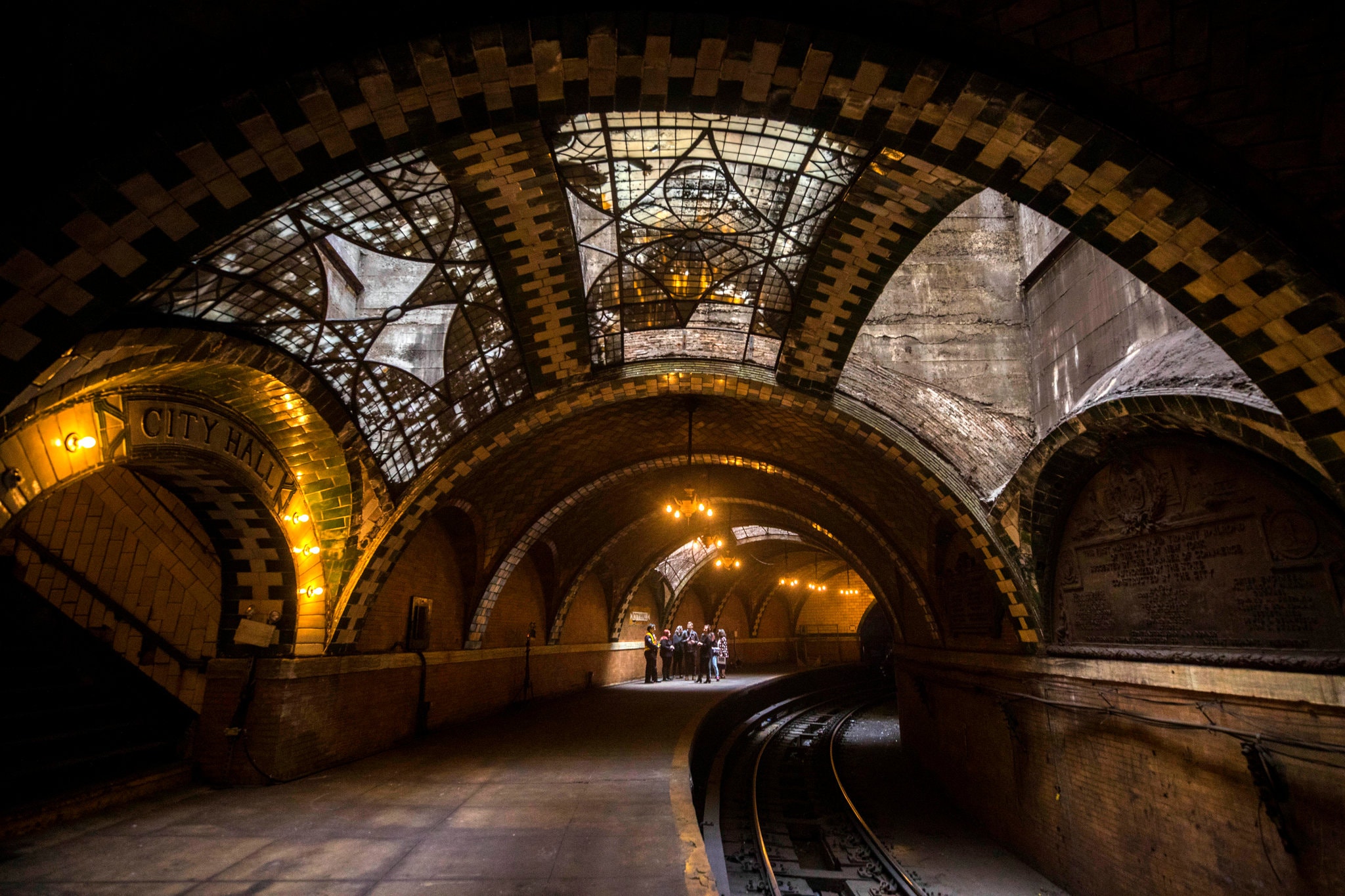 (This post probably is too commercial for here; sorries.)


Amazon sells a $19,000 do-it-yourself tiny-home kit that takes only 2 days to build — here's what it looks like inside

Tiny homes have become increasingly popular in the past few years, whether that's because of rising costs of living or because they encourage minimalist living. Tiny homes make it possible to own your own property, even if that house measures only between 100 and 400 square feet.

But while constructing a functional housing unit may seem like a daunting task, Amazon has stepped in to make a hot millennial trend available to the masses by making these tiny homes easy to buy and simple to build. There are more than two dozen options on Amazon for DIY tiny-home kits, including 113-foot cabins at $5,350 and loft-bedroom houses at $20,000.

Surprisingly, some of the Amazon listings say these tiny homes can be built in as little as two days with two people. 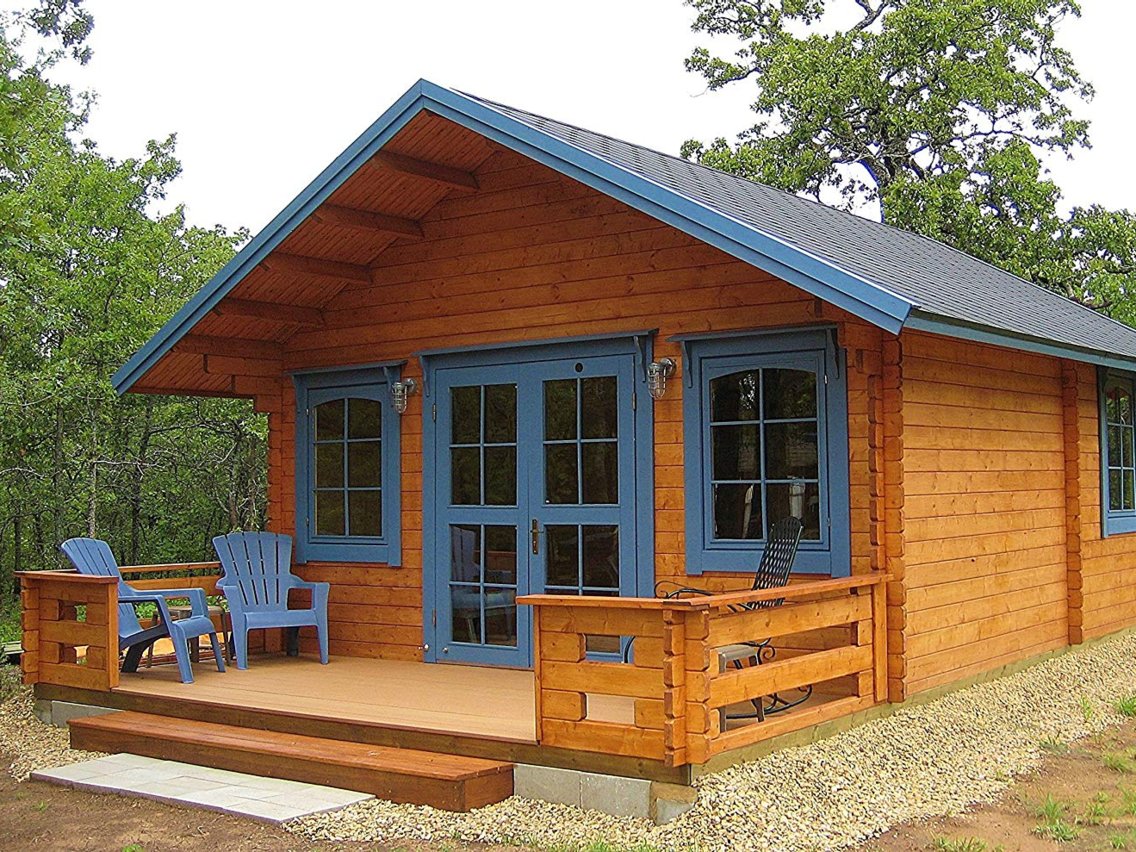 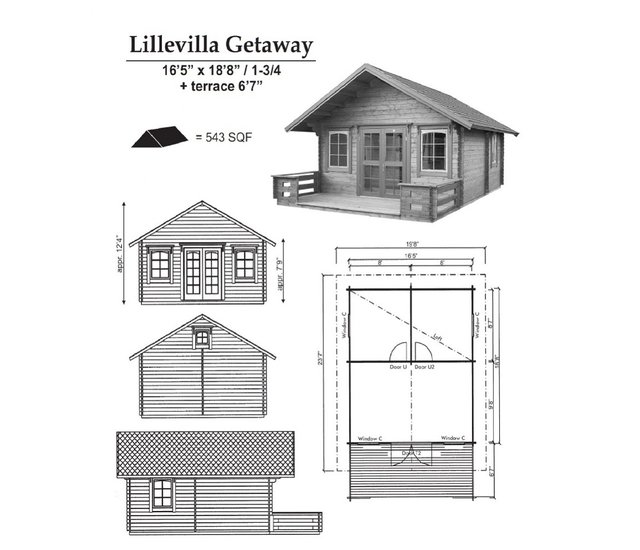 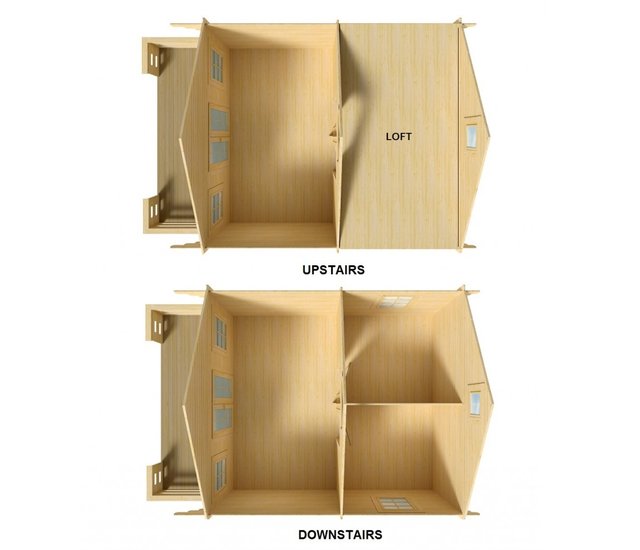 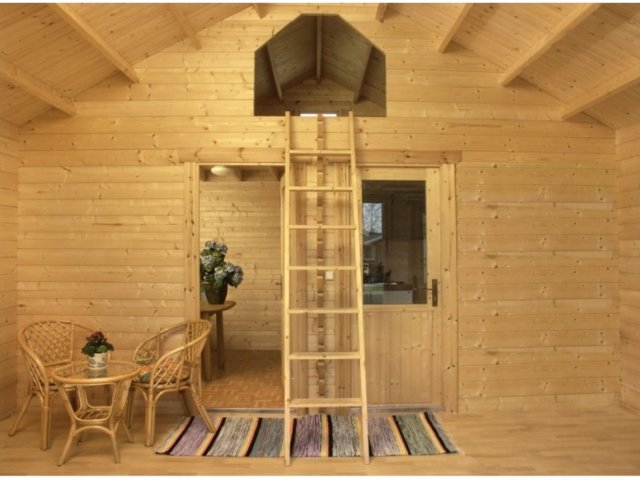 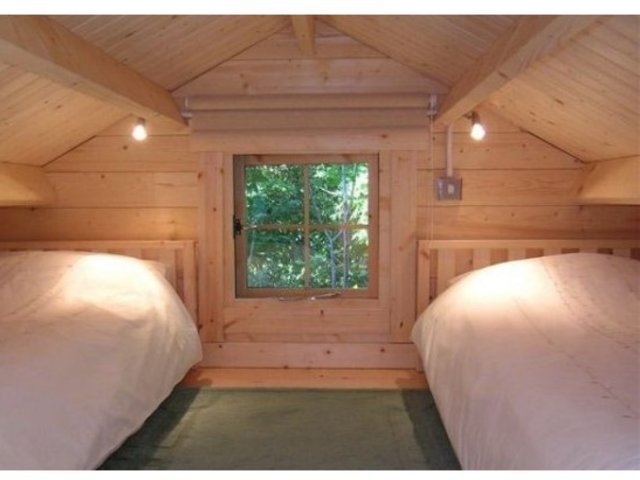 That looks like a decent tiny home for the money. Some of them are ridiculously expensive.
"I know that human being and fish can coexist peacefully"
--- George W Bush

Yeah, they are. I was thinking this would be good for a kid in college.

Yeah, that's gonna change some young people's lives.
I'm living in a world far beyond the scope of my imagination.

My daughter wants a tiny house here in the States for when she comes home, and after she retires. That looks perfect for her.
Top

Use camping accessoires and add an outhouse...

Use camping accessoires and add an outhouse...

Maine winters are mighty cold for an outhouse.

I do want to build a small house here at FEMA Camp 626, but it needs a bathroom, insulation, and electricity. Plus a well.

ABBC3_OFFTOPIC
We are up here for the holiday weekend making Verbie cook for us. W2 isn’t impressed by the no-longer-tiny lambs. Listeme says Hi! IT’S DANG HOT!!!
"[Moderate] doesn't mean you don't have views. It just means your views aren't predictable ideologically one way or the other, and you're trying to follow the facts where they lead and reach your own conclusions."
-- Sen. King (I-ME)
Top

ABBC3_OFFTOPIC
Tell Listeme that I went looking for more Elizabeth True books and guess what I found?

Olivia Lark?
"[Moderate] doesn't mean you don't have views. It just means your views aren't predictable ideologically one way or the other, and you're trying to follow the facts where they lead and reach your own conclusions."
-- Sen. King (I-ME)
Top

15 cool pics and descriptions.
A 19th Amendment Centennial Moment:
The 19th Amendment was first introduced to Congress in 1878, yet it was not approved by Congress until 1919 – 41 years later.
- https://legaldictionary.net/19th-amendment/
Top

Plenty for the critics, but awesome, too.


Suburb in the sky: how Jakartans built an entire village on top of a mall

Depending who you ask, Cosmo Park is an ingenious urban oasis or an ill-conceived dystopia 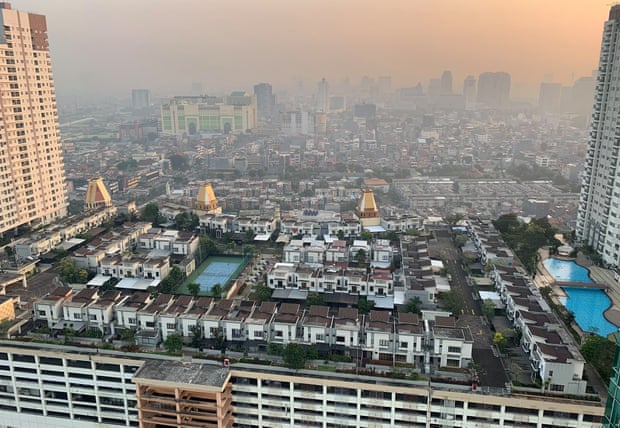 It’s Thursday and the residents of Jakarta’s Cosmo Park are out jogging, watering their plants or walking their dogs along neat asphalt roads.

Neighbourhood kids pedal their bikes under frangipani trees and peach-coloured bougainvillea to the pool and tennis court. Apartments, comfortable and modern, sit side by side, with barbecues and toys stacked outside.

Quiet and orderly, it feels like any other suburban idyll – but there is one difference. Cosmo Park is a village in the sky, perched 10 storeys up on top of a shopping centre and car park, a world away from the heaving megalopolis below.

It is a surreal urban bubble, where normal life unfolds at an abnormal altitude. To access ground level, resident drive their cars down a ramp. A tall metal fence runs around the perimeter to make sure no one falls or drives off. Peer beyond the fence and you can spot the city’s landmarks below.

Cosmo Park was built 10 years ago but was largely unknown outside Jakarta until last month, when a drone photograph broadcast its oddness to the world.

Next people wonder why the mall and parking suddenly gives way over the unplanned wheight built on top of it...
Top

As real estate and rent prices continue to rise, some Charlotteans are looking for alternative ways to build wealth and put down roots.

Ryan Mitchell has lived in a 150-square-foot tiny house in south Charlotte for seven years. It cost roughly $35,000 to construct the home and buy the solar panels necessary to power it (he’s not on the grid and instead uses the panels and batteries).

After that initial investment, he now pays less than $40 a month in housing expenses. This includes water, propane and taxes (he pays the taxes of the friend whose land he lives on in exchange for parking his tiny house there). ...

Mitchell calculates the move into his tiny house has generated $100,000 in savings. He’s also been able to work his way through his bucket list.

This includes living in Croatia and Australia, traveling to the United Kingdom and Germany for several months, doing two six-week round trips around the U.S., and paying off his approximately $30,000 in student loans in four years. 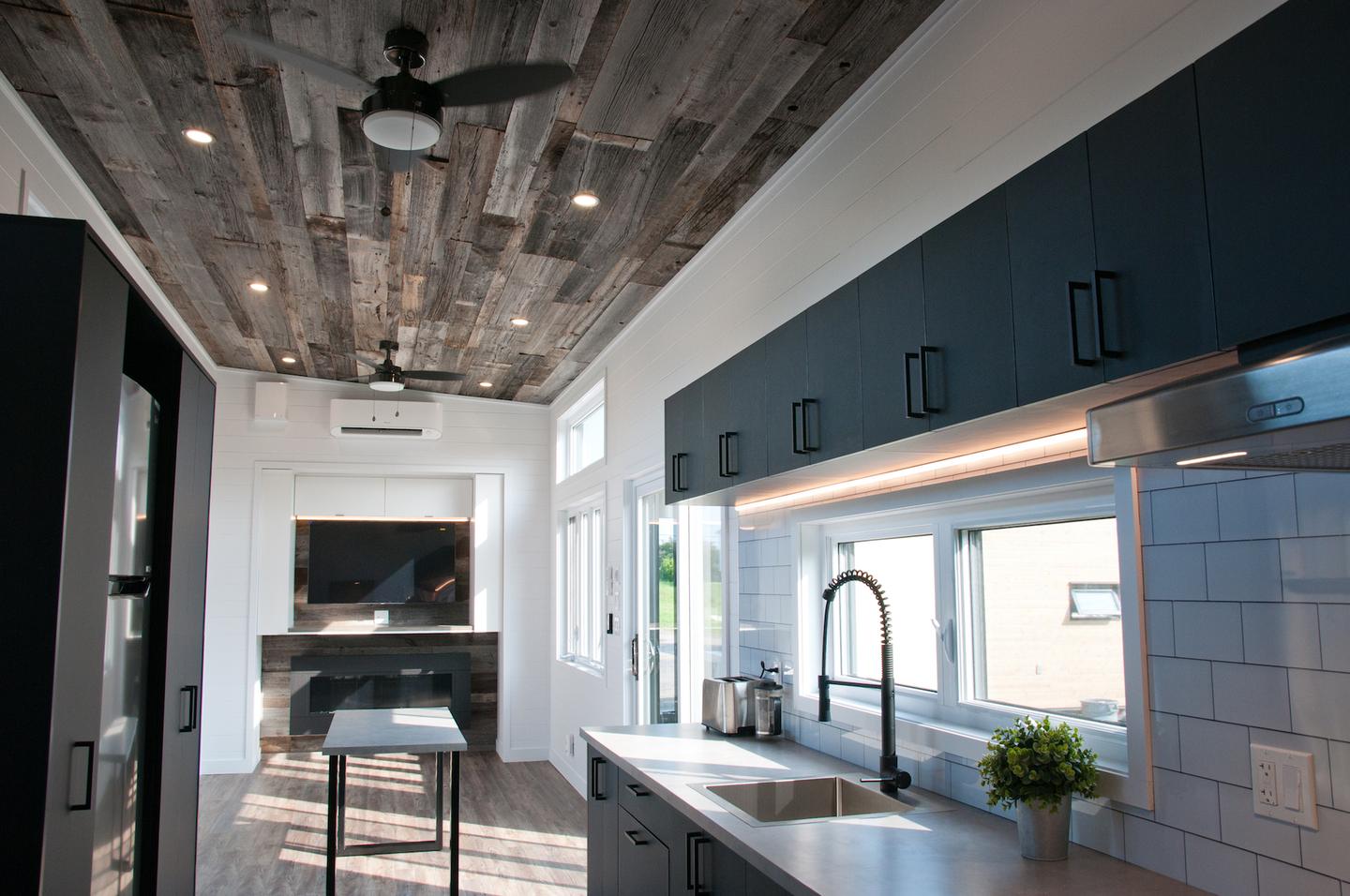 The Baobab, by Minimaliste, is a spacious tiny house that measures 38-ft (11.5-m)-long. As we've come to expect from the Canadian firm, the towable dwelling is designed to maintain a comfortable interior temperature, whether in harsh winter weather or a hot summer day.

The Baobab is based on a triple-axle trailer and clad in wood treated using the Japanese Shou Sugi Ban method of burning the wood to preserve it. Visitors enter the home via sliding glass doors, there's one on each side of the house, into a large open living room. This has a sofa (not installed at the time photos were taken), a TV, and some storage space.

There's also a propane-powered fireplace, which serves as a backup heat source in case of electricity outage, as the mini-split used for heating and cooling and the radiant underfloor heating system both require power. Additionally, two fans are installed on the reclaimed barn wood ceiling.

Interesting what can be done.

Okay, this is plain astonishing.


A Decade of Urban Transformation, Seen From Above

Change can seem slow. A new building rises, one floor at a time. A new subdivision breaks ground with two homes, and then four. A new transit line is planned, and years pass. What it all adds up to can be hard to see.

But zoom out — way out — and it’s clear that the last decade has brought remarkable transformation to many communities. It's visible from 400 miles above: Vast new exurbs have been carved from farmland, and once-neglected downtowns have come to life again. The tech industry has helped remake entire city neighborhoods, and it has dotted the landscape with strange new beasts, in data centers and fulfillment hubs.

To grasp the scale of this decade of change, The Upshot worked with Tim Wallace and Krishna Karra from Descartes Labs, a geospatial analytics company, using a tool that has itself evolved significantly over this time: satellite imagery. With its growing power and precision, we can see both intimate details — a single home, bulldozed; a tennis court, reinvented — and big patterns that recur across the country. Here, we show some of the most consequential changes over the last 10 years, as seen from above.

I'm familiar with one of those areas, and the transformation has been very visible from the ground — no need for satellite imagery. My word for that particular change has been "appalling." Fifteen years ago it was a pleasant drive. Now it's an ugly one.
Top

I was aware of a rural to urban population shift, but the extent and intensity of it surprises me.

I'm familiar with one of those areas, and the transformation has been very visible from the ground — no need for satellite imagery. My word for that particular change has been "appalling." Fifteen years ago it was a pleasant drive. Now it's an ugly one.

The change in the Seaport District in Boston is astounding. Giant buildings suddenly appeared. And continue.
"[Moderate] doesn't mean you don't have views. It just means your views aren't predictable ideologically one way or the other, and you're trying to follow the facts where they lead and reach your own conclusions."
-- Sen. King (I-ME)
Top

The one showing the rail line in Reston, Virginia, is a quarter mile from my house. One of these days that Metro Station will actually open for business.
"Hey! You know, we left this England place because it was bogus. So if we don't get some cool rules ourselves, pronto, we'll just be bogus too." - Thomas Jefferson
Top
Post Reply
282 posts