More fierce and frequent fires are reducing forest density and tree size and may damage forests’ ability to capture carbon in the future, according to a global study.

Although forest fires are naturally occurring phenomena and natural forests regenerate, global heating and human activity have caused the frequency and intensity of fires to rise. Wildfires burn 5% of the planet’s surface every year, releasing carbon dioxide into the atmosphere equivalent to a fifth of our annual fossil fuel emissions.

Researchers analysing decades of data from 29 regions in Africa, Australia, North America and South America have found that sites that had fires every year had 63% fewer individual trees and 72% less basal area – a measurement which reveals the trees are much smaller – than places that never burned. Landscapes with fewer, smaller trees are likely to sequester less carbon.

There is growing interest in planting trees as a natural climate solution, with the Trillion Trees campaign attracting the support of the global politicians and business leaders and even the enthusiastic backing of Donald Trump in the final year of his US presidency.

But researchers warned that afforestation efforts to sequester carbon would have to choose planting locations carefully and take heed of changes to fire frequency, with regular blazes changing the species within wooded areas as well as tree size.


First came the tree, all 19.5 metres of it, with roots and branches and leaves. Then, weeks later, the discovery of 150 fossilised logs, one on top of the other, a short distance away.

Nikolas Zouros, a professor of geology at the University of the Aegean, couldn’t believe his luck. In 25 years of excavating the petrified forest of Lesbos, he had unearthed nothing like it.

“The tree is unique,” he said. “To discover it so complete and in such excellent condition is a first. To then discover a treasure trove of so many petrified trunks in a single pit was, well, unbelievable.”

Stretching across almost all of the Greek island’s western peninsula, the petrified forest, a Unesco global geopark, is among the largest in the world.

Produced by successive volcanic eruptions, its vividly coloured fossilised trunks are a witness to the explosions that buried much of Lesbos under lava and ash between 17 and 20 million years ago. 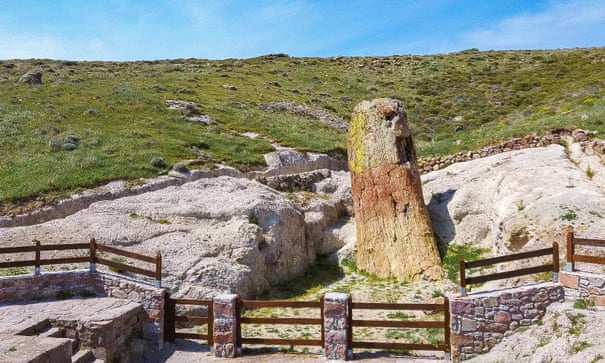 
The forest loss is also a major contributor of climate-warming emissions, with the dense tropical forest vegetation representing the largest living reservoir of carbon.

Logging and land conversion, mainly for agriculture, have wiped out 34% of the world’s original old-growth tropical rainforests, and degraded another 30%, leaving them more vulnerable to fire and future destruction, according to an analysis by the non-profit Rainforest Foundation Norway.

More than half of the destruction since 2002 has been in South America’s Amazon and bordering rainforests.

As more rainforest is destroyed, there is more potential for climate change, which in turn makes it more difficult for remaining forests to survive, said the report’s author Anders Krogh, a tropical forest researcher.


TUCSON — The giant saguaro, an icon of the American West, is beloved in this state. Arms raised in a perpetual “hello there,” the saguaro covers the desert wilderness and thrives in cities. Its silhouette appears in fine art and on restaurant walls; businesses and schools carry its name. Arizona state law protects the plant, and it is revered by the native Tohono O’odham tribe.

The largest cactus in the United States, the saguaro is distinct, visually and biologically. A mature saguaro can grow to 40 feet and weigh a ton after soaking up rainwater. Supported by its wood skeleton, the saguaro can sprout dozens of arms. Sometimes the arms are curled; if two are growing side by side, they’re often hugging.

The saguaro grows in just one part of the world: in the Sonoran Desert of Arizona; northern Mexico; a smidgen of California; and most prolifically in a mountainous swath that flows west from Tucson to the California border. It’s a landscape of rock, hard sand and open blue sky, and the saguaro has been part of it for 10,000 years.

And now, a changing climate is raising concerns about how the saguaro will survive the 21st century in an environment that’s hot and getting hotter, dry and getting drier. In a climate wake-up call, drought and record-breaking heat in 2020 contributed to wildfires that killed thousands of saguaros.


A $55m (£39m) deal struck by the government of Sierra Leone with China to build an industrial fishing harbour on 100 hectares (250 acres) of beach and protected rainforest has been criticised as “a catastrophic human and ecological disaster” by conservationists, landowners and rights groups.

The gold and black sands of Black Johnson beach fringe the African nation’s Western Area Peninsula national park, home to endangered species including the duiker antelope and pangolins. The waters are rich in sardines, barracuda and grouper, caught by local fishermen who produce 70% of the fish for the domestic market.

After reports of a Chinese-backed fishmeal plant began circulating on social media, A statement that appeared to be from the Sierra Leonean fisheries ministry confirmed the deal, but denied the planned construction was a “fish mill”. The facility would be a harbour for tuna and “other bigger fishing” vessels exporting to international markets, it said. It would include a “waste-management component” to “recycle marine and other wastes into useful products”.