Haha. There's some more in the WaPo this morning.

Obama: "Joe, why are you still holding my hand?"

Biden: "Just roll with it"

Addie wrote:Haha. There's some more in the WaPo this morning.

Obama: "Joe, why are you still holding my hand?"

Biden: "Just roll with it"

This is still my favorite (so far).
Don't just embrace the crazy, sidle up next to it and lick its ear. Jim Wright
Top

esseff44 wrote:If we feel sick and disgusted, how do you think Obama feels? And he's got to carry on in spite of it. The rest of his lame duck period is going to be harder on him than anyone. He worked his heart out for us. We need to do the same for him, IMO.

Plus now he has to teach a Master Class on Presidenting to the new clueless newbie.
"[Moderate] doesn't mean you don't have views. It just means your views aren't predictable ideologically one way or the other, and you're trying to follow the facts where they lead and reach your own conclusions."
-- Sen. King (I-ME)
Top

Another Biden meme (more at PopCrush) -

Biden meme cheetos.jpg
You do not have the required permissions to view the files attached to this post.
MAGA - Morons Are Governing America
Top

Don't just embrace the crazy, sidle up next to it and lick its ear. Jim Wright
Top

Then President-elect Barack Obama and then Vice President-elect Joe Biden smile on stage after Obama delivered his victory speech during an election night gathering in Grant Park on Nov. 4, 2008 in Chicago.


Can the UK have an ex US president as a prime minister??? Cause if ur done with Obama we'll have him pls
— khrismassy kenna?? (@Kenna_Lily) November 8, 2016

Some folks across the pond want Barack Obama to move out of 1600 Pennsylvania Avenue and into 10 Downing Street.


@Kenna_Lily I would personally row a boat across the Atlantic to go and collect him. Great idea.
— Steven Williams (@Steven993Sw) November 11, 2016


I have an idea.
Let’s find a way to have Obama as Prime Minister and then let’s have all the cool Americans move here for 4 years. Yeah?
— Sarah Parmenter (@sazzy) November 9, 2016


i miss obama already can he like come to the uk and become prime minister or king and then fight trump one on one
— i miss tøp (@HotPotatoHemmo) November 9, 2016

But hey, if Donald Trump could become president, then anything could happen, right?

Obama is clearly worried about our future. He is calm and cerebral. He's not given to panic. He doesn't believe in hopelessness. All to his credit.

He said that this is not the apocalypse. But if it were THE APOCALYPSE, we wouldn't have to worry. Our future would be settled. Some are raptured and the rest of us burn in hell in one fell swoop at the end of days. No, no, I am not worried about it being THE APOCALYPSE. It's something we have seen before and hoped we would never have to see again.
Top

More like the Auto-da-fé.
The bitterest truth is healthier than the sweetest lie.

Bingo! That's one example of what we have seen that we wouldn't want to see again. Most often, it is undertaken against a minority group that threatens the authoritarian leader of a majority faction. What happens when there is a situation with an authoritarian leader of a minority faction who attempts to impose their views on a majority of the populace. How does that work out. I witnessed the Catholics in VN attempt to dominate and persecute the Buddhist majority. It could not have lasted as long as it did without the outside aid of the US military. It ultimately failed and most of those involved are now in exiles or are transitioning from refugees to permanent relocation in other countries.

The situations that I can think that resemble our own resulted in protracted civil conflict and civil war.
Top The unseen possibilities of modern gadgets: he now can continue to walk around his White House estate, inside and out, using virtual reality in 3D, even when not getting his 3rd term 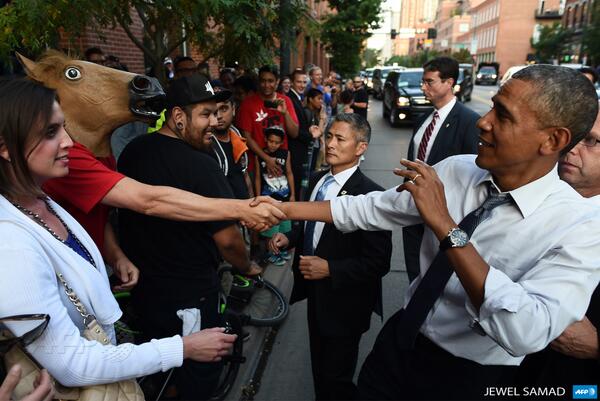 © KEVIN LAMARQUE / REUTERS
During what could be the last ever White House press briefing in the James S. Brady Press Briefing Room, President Obama surprised his Press Secretary Josh Earnest by taking the podium to deliver a a few words of gratitude.

“He's just got that all American, matinee, good-looking thing going. That's helpful, let's face it. Face made for television,” Obama said of Earnest, recalling their first meeting in Iowa during the 2008 campaign. “Then the guy’s name is Josh Earnest, which, if someone is speaking on your behalf, is a pretty good name to have.” Going on to praise Earnest's "smarts, maturity and actual interest in the issues" as well as his "integrity," the president said, “Of the folks that I’ve had the great joy and pleasure of working with over the last 10 years on this incredible journey, you know, this guy ranks as high as just about anybody I’ve worked with. He is not only a great press secretary but more importantly, he is a really, really good man and I’m really, really proud of him.”

Tuesday may have marked Earnest's last briefing, but President Obama himself is scheduled to deliver his final press conference from the White House on Wednesday afternoon, January 18, just two days before Donald Trump's inauguration.

His name has always struck me as perfect for someone who is Obama's spokesman. Just like Obama, Earnest's name has a balance of playful and serious.
Top