The fire began in a pallet yard and spread to a nearby bus yard, according to officials. Multiple structures were reduced to rubble, at least a dozen buses were scorched, several transformers reportedly exploded and power lines were downed as the fire continued to rage.

A massive column of smoke could be seen from several miles away, including in downtown Los Angeles.

The fire exploded in size around 6 a.m.

AIR7 HD was over the scene as daylight illuminated the widespread damage. Fire crews surrounded the area as flames ripped through rows of school and charter-style buses parked in a lot next door -- several of which appeared to be a total loss.


- your friendly local "extreme moderate", political science extrordinaire, and master of the simulacrum.

Fox News ... and republican congressmen
Antifa and BLM no doubt...


Officials said the fire was in such an advanced stage that a second alarm was requested before firefighters arrived and a third alarm was called about 15 minutes later.

Between 60 and 65 firefighters surrounded the blaze and brought it under control shortly after midnight, according to Dallas Fire-Rescue.

The cause of the fire, which destroyed four buildings consisting of 14 apartment units, has not been determined. 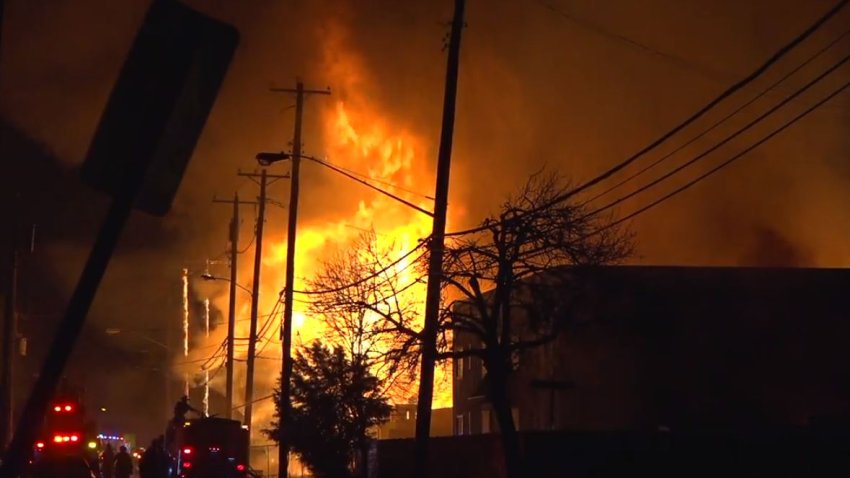 Wisconsin Governor Declares State of Emergency Over Wildfire Conditions
More than 300 wildfires have destroyed nearly 1,500 acres since the start of the year, and fire officials warn this could be a longer-than-average season.

“With nearly the entire state experiencing high or very high fire risk, protecting Wisconsinites from the destructive dangers of wildfires is a top priority,” Mr. Evers said in a news release.

In the past week, there have been 149 wildfires across Wisconsin, according to a map on the department’s website, and there have been at least 340 fires since the start of the year.

How long before the Wisconsin legislature votes to take away the Governor's powers to declare this state of emergency?

Why doesn't the Wisconsin government get out there and rake some forests?

It's only April, and WI has a drought problem forcing wildfire season to come early?

Evacuations ordered as wildfire spreads in Arizona
The blaze has burned 1,000 acres since it was reported Sunday afternoon.


The blaze started between the Flag Mine and Wild Cow Campground in the Hualapai Mountains, which is about 11 miles south/southeast of Kingman.

Evacuations have been ordered for about 200 homes, said Anita Mortensen, spokeswoman for the Mohave County Sheriff’s Office.

A helicopter crew will do a reconnaissance over the fire area Monday to get a better sense of the impact, officials said.


The flames started near a dam in Northern California last summer and tore through a vast stretch of land, killing two men whose homes lay in its path.

For eight months, investigators worked to determine the cause of the Markley Fire, which merged with nearby blazes in what became one of the largest wildfires in state history. On Wednesday, authorities announced they had found an answer: The blaze was set intentionally to cover up a killing.

Police arrested Victor Serriteno within weeks of the August 2020 fire, charging him with killing Priscilla Castro, 32, of Vallejo, Calif., who he had met for a date. Prosecutors now plan to file additional murder charges against the 29-year-old in connection to the blaze, including the two men it killed: Douglas Mai, 82, and Leon “James” Bone, 64.

“The fire had devastating impacts on so many people in our community,” Solano County District Attorney Krishna Abrams said during a news conference announcing the findings.

Woman accused of setting home on fire with person still inside and watching it burn from lawn chair
Gail L. Metwally was charged with attempted murder and multiple arson-related counts after witnesses alleged that they saw her setting a home on fire.


The Maryland State Fire Marshal said that on April 29, witnesses observed Gail J. Metwally, 47, "setting multiple fires within the home" and then watching the home burn while she sat in a chair on the lawn.

Metwally was arrested near the home in Elkton shortly after the incident and charged with first- and second-degree attempted murder, first-degree arson, first-degree assault and other counts, the fire marshal said in a statement.

In a Snapchat video that was verified by NBC News, a bystander recorded Metwally in what appears to be an argument with a man and a woman at the home.

After flames appear inside the home, and for multiple clips of the Snapchat video, Metwally appears to be sitting on a lawn chair and reading a book as the fire grows.

The fire marshal said bystanders helped a person who was trapped in the home and confirmed that a "total of 4 people resided in the home, including Metwally." The two residents aside from Metwally and the person in the basement were not home at the time. in the aftermath of last years fires in Australia

Interesting video. Thanks for posting.

Authorities are also searching for a person suspected of setting the blaze.

Crews responded to a remote area around 10 p.m. Friday as the fire grew to approximately 15 acres, according to the Los Angeles Fire Department.

The fight continued overnight, but by 4 p.m. Saturday, firefighters were dealing with a significant flare-up that quickly got out of hand, creating a large plume of smoke visible across Los Angeles County.

The blaze, dubbed the Palisades Fire, is 0% contained. Some rain was falling Sunday morning, which fire crews hoped would help in the fight.

Palisades Fire was 1325 acres as of yesterday afternoon.


A person who was detained over the weekend in connection with the 1,325-acre Palisades Fire in the Santa Monica Mountains has been arrested, officials announced Monday.

Investigators have deemed the cause of the fire, which started Friday night in a remote area off Michael Lane and Palisades Court in Pacific Palisades, as suspicious. The flames spread through vegetation that hasn’t burned in half a century.

I just want to remind people - when I lived in SoCal, there was a massive fire, started by arson, in Laguna Beach (the town in which I was married). Many homes of wealthy people burned. The smoke could be seen from 20 miles away. It was a bad thing.

They arrested a gentleman for starting the fire, and they told the public that he had admitted to knowing details about how it began that nobody could know except the arsonist. Crime solved, excellent detective work. He was easily going to be convicted and sentenced to many, many years in prison.

And since he was a poor immigrant who didn't speak English, he had virtually no chance of being acquitted at trial. He was toast.

But then his mama ruined things by producing absolutely genuine documents showing that he in jail in Mexico for a few days, including the day the fire started.

So how did he know details about the fire that only the arsonist could have known? He didn't. The fire investigators and the cops lied so they could claim they caught the right man.

I will never trust an arson arrest again, after seeing that.

You should read The Library Book by Susan Orleans. It’s about the fire in the Los Angeles Central Library, and the arson investigation that followed. Junk science.

"Hey! We left this England place because it was bogus, and if we don't get some cool rules ourselves, pronto, we'll just be bogus too!" -- Thomas Jefferson

I just watched "Fire Starter" on Scary People (HLN). It is an in depth documentary about a California arsonist who was a firefighter.

Fanny Longfellow, the poet's wife, was a pioneer in the use of ether during childbirth despite family objections and prevailing religious attitudes against it.

Return to “Whatever Doesn't Fit Elsewhere”