Seems more like the Young Whackos and Looney-toons Summit..

It's the White Women With Long Hair Summit.

"I am here by divine special appearance." -Pauline Bauer
Top 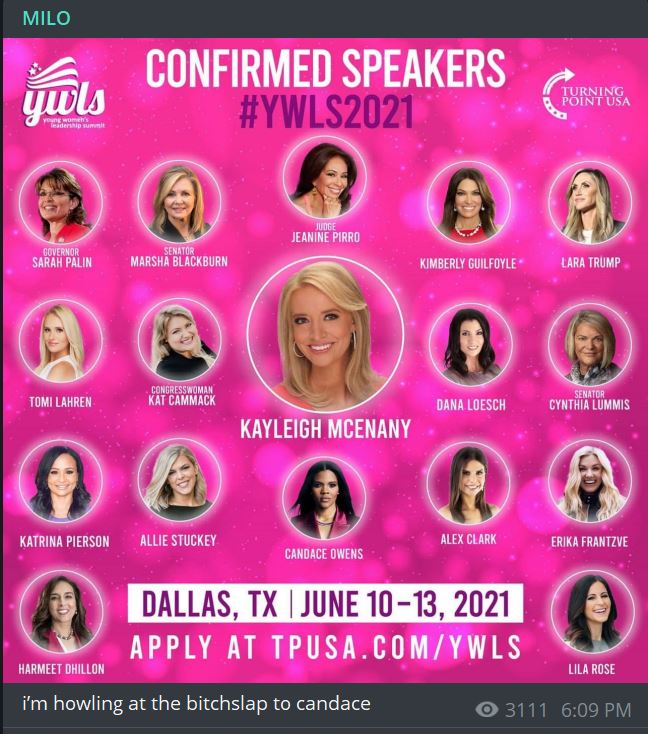 more not-blond in that photo

Talk about bitch slaps. WHY isn't Marjorie Taylor Greene in that lineup?

MJT and TPUSA are not friends.


Dalton Sherrod, the vice president of UGA’s chapter of Turning Point USA, has met Greene and is “not her biggest fan.”

To continue the bitchery, Kimberly Guilfoyle looks so plastic we are back to the lost sex robot thread. (And you can have that band name for free - lost sex robots)

The plot sickens. Why isn't Akbar in jail? Unless he's cooperating to bring more of these seditionists down because he goes away. Figures Christina Bobb is in on this, she's been raising money for the Fraudit.


Dillon Rosenblatt @DillonReedRose 7h
EyesEyesEyes Non-journalist @christina_bobb may have been inside Trump's January 6 Willard Hotel "War Room.”
Quote
Seth Abramson @SethAbramson 8h
PS2/ There's a real possibility now that a certain OAN anchor just became one of the most important witnesses in the January 6 investigation. If we want to know who Ali Alexander spoke with at DHS on December 21—and I know I do—I know the first former DHS employee I'd be calling.

Did someone already ask Ted Nuggent and Kid Rock about their show on Aug. 15

Ask him? He get a share of the grift.

Inauguration at ?? o'clock, on a Sunday.

Snopes, besides pointing out the tickets in the picture are obviously doctored fakes from an image of real tickets to something else, they did mention that they have not found anybody actually trying to sell tickets, yet.

Looks like those tickets started as a joke to make fun of the idea, and then the story got embellished.

I am extremely skeptical that any 'qanon site' is actually selling them or people are actually buying them, though I guess it is always possible some scammer found a mark or two.

(heh, northland10 beat me to it, and remembered to include the link)

It's great fun. Either it mocks their whole stupid fantasy and rubs it in their noses, or some idiot will buy them and keep that money out of 2022 election races. We win either way!

Hey, why don't we contact The Spork and tell him we got a deal and he can have the tix for only $500?

It would not surprise me if some scammer actually does try to sell these to Qidiots. They are easy marks.

Negatory. That money is needed by Sporky's wife, who actually earns it.

"We're Republicans. We're not getting the vaccine.

Negatory. That money is needed by Sporky's wife, who actually earns it.

Could we compromise to sell them to Qidiots to fund an intervention and divorce lawyer for Mrs Spork?

"...don't teach a man to fish. He's a grown man and fishings not that hard." Ron Swanson the worlds only good libertarian

"We're Republicans. We're not getting the vaccine.

Let's all shed a tear for poor Mike Pence....

Awww. Poor Pence. You reap what you sow.

Ali Alexander, the leader of the so-called “Stop the Steal” movement, resurfaced this week to announce his return to political activism. In a video posted to his Telegram account Monday, Alexander, 35, revealed that he is “not in hiding, contrary to the wishes of the violent left and corporate media” and urged his followers to “gather together once again to fight … for our republic.” “The work is not done,” Alexander said in the video. “The republic is in a dire situation that requires us to keep fighting.”

Alexander’s latest video comes weeks after the right-wing provocateur encouraged his supporters to demand a “forensic audit” of the election results in Georgia—despite no evidence of fraud—and called on them to join Republican gubernatorial candidate Vernon Jones, who was a fixture of Stop the Steal rallies, for a rally at the Georgia State Capitol on May 19. Alexander’s return to the political fray is significant. In the lead-up to the Jan. 6 Capitol insurrection, the far-right activist spent months promoting the baseless conspiracy theory that former President Donald Trump won the 2020 presidential election and embracing adherents of the far-right QAnon conspiracy theory as well as the neo-fascist Proud Boys hate group during his so-called Stop the Steal rallies.

Following the insurrection, Alexander was banned from major social media platforms such as Twitter and Facebook but remained active on alternative platforms such as Telegram and the gaming platform Trovo, where he claimed, “I’ve been plotting. I’ve been planning. I’ve been scheming.” Despite such claims, Alexander appeared to mainly devote his time to discussing cryptocurrency and pushing the crypto-based social media app BitClout. On Tuesday, Alexander revealed that he had filmed a segment for a “major cable news channel to combat some of the lies” regarding the Jan. 6 insurrection. “It’s time to fight back,” he concluded on Telegram.

RWW is really a good site to keep track of. There's a guy in AZ who has AZ RWW but don't think they're connected. https://twitter.com/az_rww

Think about how different the case numbers, mortalities, and potentially the election could have been if we weren’t suffering from lockdowns and illegal restrictions.

, [17.06.21 20:35]
Kamala Harris is the worst fakest American Black ever. The irony of these partisans calling successful Blacks “Uncle Toms” to push their fake Blacks, like Indo-Jamaican Kamala, and South American immigration is a total sick joke. When she smiles, another Black dream dies.

Said it. Sorry not sorry.

My latest writing. Please share on platforms I’ve been deplatformed from.

NEW - California Democrats have access to a "rapid response team" at Twitter, which takes down tweets that are in opposition to the DNC per request.

This is a massive civil rights violation against protestors—most who walked in not seeing barricades (that had been removed) or bird dogged by agitating agents.

We'd better be seeing this seditionist grifter behind bars soon. If the Feds don't take care of this, Lt. Root Beer and the 699th will make him wish they had.

O'Handley's lawsuit is just a high-rent Klayman-esque grift: The claim is Twitter is an agent of California because California asked Twitter to take down some tweets (which it did).

Return to “QAnon and StopTheSteal whackos”