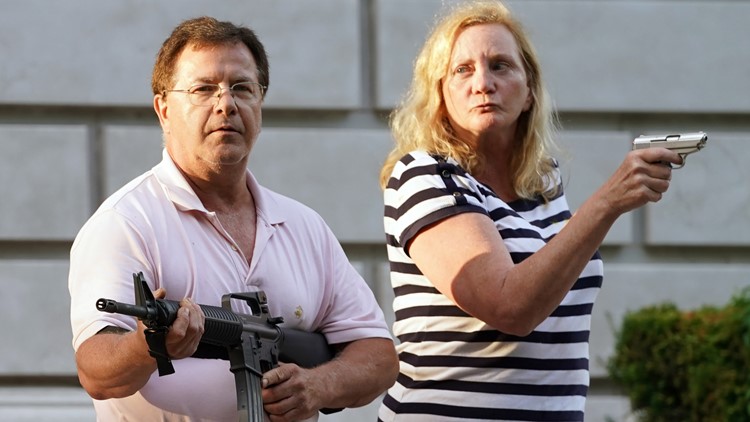 ST. LOUIS — The Central West End lawyer who rose to prominence after photos and videos showed him pointing a gun at protesters last summer joined the U.S. Senate race Tuesday.

McCloskey announced his candidacy in a since-deleted YouTube video posted to a newly published campaign website. In a tweet, he also teased an announcement with Fox News host Tucker Carlson tonight.

On June 28, 2020, Mark and Patricia McCloskey were seen in videos and photos pointing guns at protesters who were marching to the home of then-St. Louis Mayor Lyda Krewson's house to call for her resignation.

The McCloskeys were charged with unlawful use of a weapon/flourishing after they confronted protesters with a rifle and a gun.

Since then, they have received support from conservative politicians.

"Enough is enough. As Missouri's chief law enforcement officer, I simply will not stand by while Missouri's law is being ignored," he said in a video statement.

Business must be way down for Marky.

We're Heading for Mark McCloskey Versus Eric Greitens in the Senate Race
Posted By Doyle Murphy on Tue, May 18, 2021 at 7:07 pm

Mark McCloskey, who landed a national political soapbox by pointing guns at protesters, is apparently running for Senate. The attorney tweeted that he would be making a "huge announcement" on Fox News host Tucker Carlson's show tonight. He's also launched a campaign website. Records show he registered the site in April, but it was updated today. It now features the mansion-dwelling lawyer wearing a snap-button shirt, open three buttons, and posing in front of a John Deere. He is described there as the captain of his high school wrestling team and student body president.

Until June 28, McCloskey and his wife Patricia were largely unknown outside of St. Louis. But when protesters walked past the home previously described as a "Midwestern palazzo" in a St. Louis Magazine interview, they were greeted by a fuming McCloskey in pastel yacht-wear cradling an AR-15 and shouting at them to "get the hell out of my neighborhood." A shoeless Patti McCloskey soon appeared on the lawn, panning a crowd that included children with a handgun. A later examination of her gun revealed it wasn't in working order at the time, but the same can't be said of Mark McCloskey's rifle.

He likened the confrontation to the "storming of the Bastille," and the couple has insisted they were forced to act in order to keep from being murdered and burned in their home with their dog.

This will be interesting, DL2XIT & Co are supporting

Luckily for Trump Republicans in Missouri, Navy SEAL and former Governor Eric Greitens is both a true conservative and a dedicated fighter. Gov. Greitens stands ready to continue fighting for President Trump’s America First agenda in the U.S. Senate.

I was recently named the National Chair of Governor Eric Greitens’ campaign for the U.S. Senate. As a former senior advisor to President Donald J. Trump who led Trump Victory Finance Committee, it isn’t a role I took without careful consideration.

I see in Gov. Greitens similar attributes and circumstances that inspired me to be one of President Trump’s first and biggest advocates back in 2015 while I was a host for Fox News.

I was thinking that McCloskey Law might have suffered a business downturn in the last year. They have an expensive house to maintain, and maybe people don't want to admit that their lawyers are assholes.

gshevlin2 wrote: ↑Thu May 20, 2021 11:25 pm I was thinking that McCloskey Law might have suffered a business downturn in the last year. They have an expensive house to maintain, and maybe people don't want to admit that their lawyers are assholes.

The bigger the asshole, the better the attorney.

At least that's what the Tee Vee teaches.

"There's no play here. There's no angle. There's no champagne room. I'm not a miracle worker, I'm a janitor. The math on this is simple. The smaller the mess, the easier it is for me to clean up." -Michael Clayton

gshevlin2 wrote: ↑Thu May 20, 2021 11:25 pm I was thinking that McCloskey Law might have suffered a business downturn in the last year. They have an expensive house to maintain, and maybe people don't want to admit that their lawyers are assholes.

My understanding is they made their money by trying/settling plaintiff's cases in the very plaintiff friendly, generous and black St. Louis City and Madison County Illinois and as I understand it, they got a lot of their cases on referrals.

I don't think that's working out for them.

“A US couple who were filmed outside their mansion waving guns at social justice protesters last summer have pleaded guilty to misdemeanour charges.
Mark and Patricia McCloskey agreed to give up the guns used in the 28 June confrontation in St Louis, Missouri.”

BBC wrote:Because the charges are misdemeanours, the personal injury lawyers can keep their law licenses and continue to own firearms.

Special prosecutor Richard Callahan said in a statement to local media on Thursday that he approved the plea because of the couple's age, lack of a criminal record and the fact that no-one was hurt and no shots were fired.

"The prosecutor dropped every charge except for alleging that I purposely placed other people in imminent risk of physical injury, right, and I sure as heck did," Mr McCloskey said after the court hearing.

"That's what the guns were there for and I'd do it again any time the mob approaches me."

Wonder how the judge felt seeing that interview? I doubt they were so cocky in court.


Noted local criminal Mark McCloskey played host to a barbecue/political rally on Sunday afternoon, drawing tens of admirers to the sweltering parking lot of a closed outlet mall in St. Louis County to celebrate the one-year anniversary of the time he pulled a gun on a crowd of people who otherwise would never have noticed or cared he existed.

Despite the fact that none of the big names who had been billed to speak at the June 27 event showed up, and despite the fact that ticket sales were so dismal attendance was opened to the public for free at the last minute, St. Louis' most gun-surrendering lawyer plowed right ahead with the First Annual Pink Shirt Guy BBQ and RINO Roast in the St. Louis Mills parking lot.

They were at least kind enough to wear their signature outfits, which is good because no one would recognize or care about them otherwise. 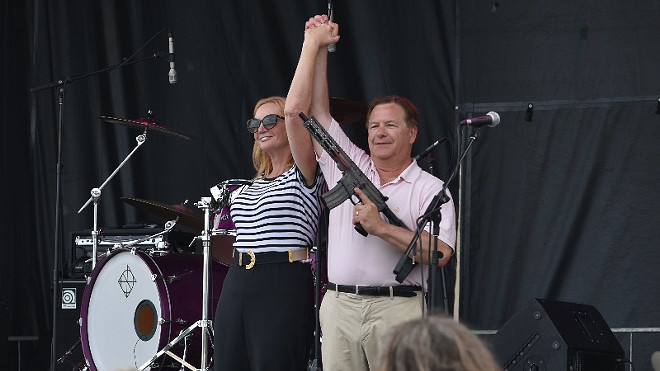 At long last, after a gushing introduction in which Allman described Mark and Patricia as "everyone's favorite neighbors" (a characterization with which their actual neighbors whole-heartedly disagree), McCloskey took to the stage to bask in the adulation of the not even half-full seating area of his adoring fans. He insisted gravely that the crowd of people who were walking past his house that fateful day a year ago would have murdered him and his wife and their dog and then burned their house down had he not waddled his ass outside barefoot to threaten them with a rifle, which is pretty confusing seeing as how literally none of McCloskey's neighbors did the same and yet they all somehow came out unscathed. It also doesn't fit with the findings of special prosecutor Richard Callahan, who noted in a statement upon the McCloskeys' guilty plea that: "The protesters on the other hand were a racially mixed and peaceful group, including women and children, who simply made a wrong turn on their way to protest in front of the mayor’s house,” noting further that absolutely no evidence was ever found to show that any of the protesters were armed or intent on harming the couple. 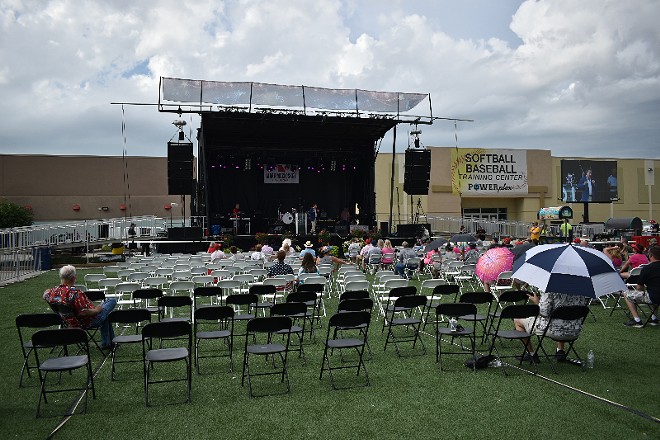 
Noted local criminal Mark McCloskey played host to a barbecue/political rally on Sunday afternoon, drawing tens of admirers to the sweltering parking lot of a closed outlet mall in St. Louis County to celebrate the one-year anniversary of the time he pulled a gun on a crowd of people who otherwise would never have noticed or cared he existed.

That's a birther-sized crowd except for Dr. kHate who had five if you include the 2 park police officers assigned to her event.

They were at least kind enough to wear their signature outfits, which is good because no one would recognize or care about them otherwise.

Hard to tell it's then for sure. I can only identify her by the mustard stain and I see none in the photo.

I love that they call it her Hamburglar outfit.