On Sunday, NARAL, the People’s Defense coalition, and MoveOn, along with more than 75 other groups, have organized the Unite for Justice day of action, with more than 200 marches, rallies, and other events planned around the country. The goal: to show senators the depth and breadth of opposition to Kavanaugh, a nominee who, opponents fear, could help the court gut not only abortion rights, but voting rights, gun control, and more. ...

This Women’s Equality Day, Americans are taking to the streets

The timing of the day of action on Women’s Equality Day wasn’t intentional, Kerrigan said. NARAL and the other organizations involved wanted to pick a date before the confirmation hearings started; they are slated to begin on September 4.

But the holiday takes on a new significance in light of the Kavanaugh nomination, Kerrigan added. Congress declared August 26 Women’s Equality Day in 1973, in a resolution introduced by Rep. Bella Abzug (D-NY). The day was chosen to commemorate the 1920 signing of the Nineteenth Amendment, which officially granted women the right to vote. (In practice, many black women were still denied this right due to voter suppression tactics, some of which continue to this day.) In an ordinary year, Women’s Equality Day is celebrated with events at libraries and other public facilities, according to the National Women’s History Project.

This isn’t an ordinary year. Reproductive rights advocates fear that, if confirmed, Kavanaugh could be the deciding vote in overturning Roe v. Wade, which guaranteed women the right to an abortion (though that right, like voting rights, looks different in practice). If the decision is overturned, reproductive freedom for millions of Americans could be under threat. And since the ability to decide when and whether to have children is intimately linked with the ability to work, study, and participate fully in society, advocates say women and all people who can get pregnant would be at risk of becoming second-class citizens.

That’s why women’s rights and other progressive groups across the country, including the Women’s March, Color of Change, and the National LGBTQ Task Force, are organizing events on Sunday to protest Kavanaugh’s nomination and get out the vote for the upcoming midterm elections. The events will range from a barbecue in Birmingham, Alabama, to a “Texas-size postcard party” at the Texas State Capitol, where attendees will write postcards to Texas women urging them to vote in November. In Anchorage, Alaska, protesters will write letters to Sen. Lisa Murkowski (R-AK), who is seen as a possible “no” vote on Kavanaugh due to her pro-abortion rights views. Then some of those in attendance will board a plane to deliver the letters to Murkowski in person.

"The very least you can do in your life is to figure out what you hope for." - Barbara Kingsolver


Over 200 protesters arrested during Kavanaugh hearings

The Senate Judiciary Committee hearings with Kavanaugh lasted from Tuesday to Thursday and were met with aggressive protests, with individuals shouting intermittently throughout the hearings.

The demonstrators were subsequently led out by police as lawmakers and the Trump nominee paused the back-and-forth of questioning.

Nearly two dozen people have been arrested for protesting inside the offices of Republicans whose votes will be key in the confirmation of Brett Kavanaugh, the Hill reported.

According to Capitol Police, 23 people were removed from Sen. Bob Corker’s (R-TN) office for unlawful demonstration activities. Protesters — many of whom were from groups like the Women’s March and Center for Popular Democracy — also occupied the offices of Sens. Chuck Grassley (R-IA), Susan Collins (R-ME) and Jeff Flake (R-AZ).

Many women involved in the protests were sharing their personal #MeToo stories and wearing buttons that said “I Believe Dr. Christine Blasey Ford,” the woman who has accused Kavanaugh of sexually assaulting her in high school.

A group of two dozen people gathered in the driveway of Christine Blasey Ford's Palo Alto home Thursday to show support for the professor who says she was sexually assaulted by Supreme Court nominee Brett Kavanaugh.

While the Palo Alto neighbors marched in front of Ford's house, the advocacy group UltraViolet hired plane to fly over the region with a banner reading, "Thank you Christine. We have your back."

"Ford has demonstrated tremendous courage in coming forward and sharing her story of how Brett Kavanaugh sexually assaulted her. She is a hero and we have her back," explained Shaunna Thomas, a co-founder of the women's advocacy group. "Violence against women should have no place in our society and it certainly should have no place on the highest court in the nation. Brett Kavanaugh should withdraw his nomination."

The loBOTomized are out in force on twatter defending KravenNaw

It happens after Yale alumna Deborah Ramirez alleged on Sunday in a New Yorker story that Kavanaugh committed sexual misconduct by exposing himself when she was drunk during a dorm room party. Kavanaugh has also been accused of attempted sexual assault by Dr. Christine Blasey Ford.

31 classes have been cancelled as a result of the protest.

“Student speakers at the event, some of whom identify as survivors of sexual violence, will urge the Senate to delay the confirmation vote in order to afford Dr. Blasey Ford and Debbie Ramirez the fair process that every survivor deserves,” the press release says. “The press conference will also include remarks from students who will share stories regarding the ways in which judicial decisions on sexual violence, abortion, LGBT rights, and healthcare could affect them personally.”

As referred to in the opening, a number of faculty members (dozens) at Yale Law School have already demanded that the Senate Judiciary Committee pause confirming Kavanaugh to the Supreme Court.

Women and men across the country are planning a national walkout on Monday afternoon in a show of solidarity with sexual assault survivors, as Dr. Christine Blasey Ford prepares to testify regarding her allegations against Supreme Court nominee Brett Kavanaugh.

More than three dozen progressive organizations—including NARAL Pro-Choice America, CREDO, and Planned Parenthood Action Fund—announced the event late Saturday, calling on survivors and allies to wear black on Monday and to walk out of their workplaces, schools, and homes at 1:00pm EST. Supporters will also be posting photos of their participation online with the hashtag #BelieveSurvivors. ...

By Sunday morning, more than 5,000 people had pledged to join the walkout as supporters spread the word on social media. Hundreds of Ford's supporters are also expected to stage protests in Senate offices on Capitol Hill Monday, while alumnae of the Holton-Arms School in Bethesda, Maryland, where Ford was a student when Kavanaugh allegedly assaulted her at a party, planned a vigil outside the White House on Sunday at 5:00pm EST.


Anti-Kavanaugh protests lead to arrests at the Capitol 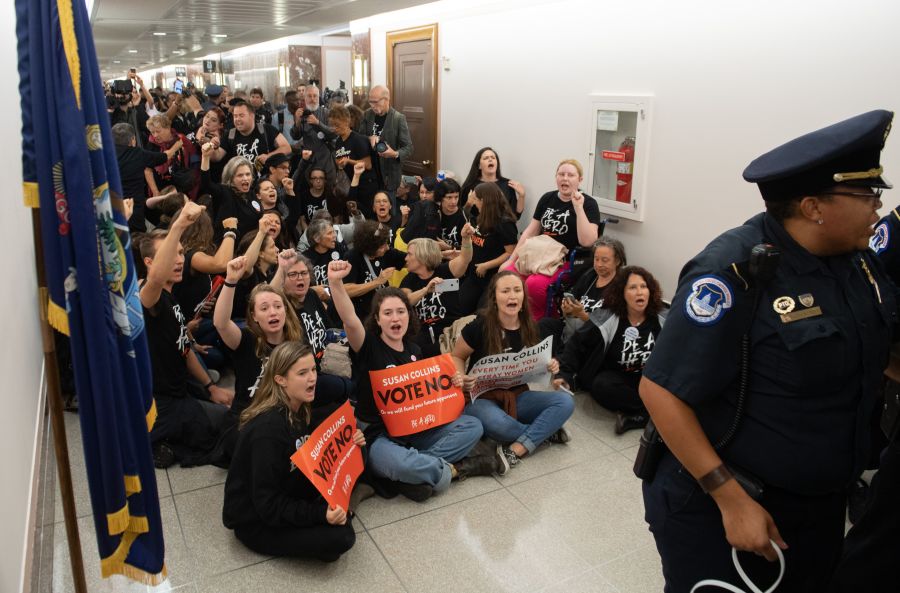 Protests at the US Capitol on Monday led to some arrests as demonstrators gathered to oppose embattled Supreme Court nominee Brett Kavanaugh's confirmation to the high court.

The demonstrators sought to put pressure on Sen. Susan Collins, a potential swing vote, by showing up at her Dirksen Senate office. An aide from Collins' office came out into the hallway at one point to listen to the protestors.

The protestors implored the senator to take a stand sooner rather than later, saying: "Collins needs to make a decision now when it matters and stand up for us."

Another protestor indicated that she was still holding out hope that Collins would be a "no" vote on Kavanaugh's nomination, saying, "We believe that Senator Collins can be a hero."

Capitol Hill police worked to make sure that people had room to move throughout the hallways, and later arrests began to take place outside of Collins' office to protestors occupying the hallway.