What's been called the most significant dust cloud in 50 years has now shrouded the U.S. Gulf Coast in a thick, dusty haze. The dust layer, which originated in the Sahara desert and drifted across the Atlantic, is forecast to continue moving north and east through the weekend, impacting areas from Texas and Florida all the way up to as far north as the Canadian border.

For most people, the dust will merely be a nuisance, but for many who have breathing issues the extra particulates in the atmosphere can cause complications. The timing couldn't be much worse, considering that a recent Harvard study shows that long-term exposure to fine particles of pollution in the air, much like dust, may be linked to higher rates of hospitalization and death due to COVID-19.

Currently the dust is thickest from Texas to Florida. ...

The dust is responsible for the dense haze shrouding Houston's skyline in the photo below. 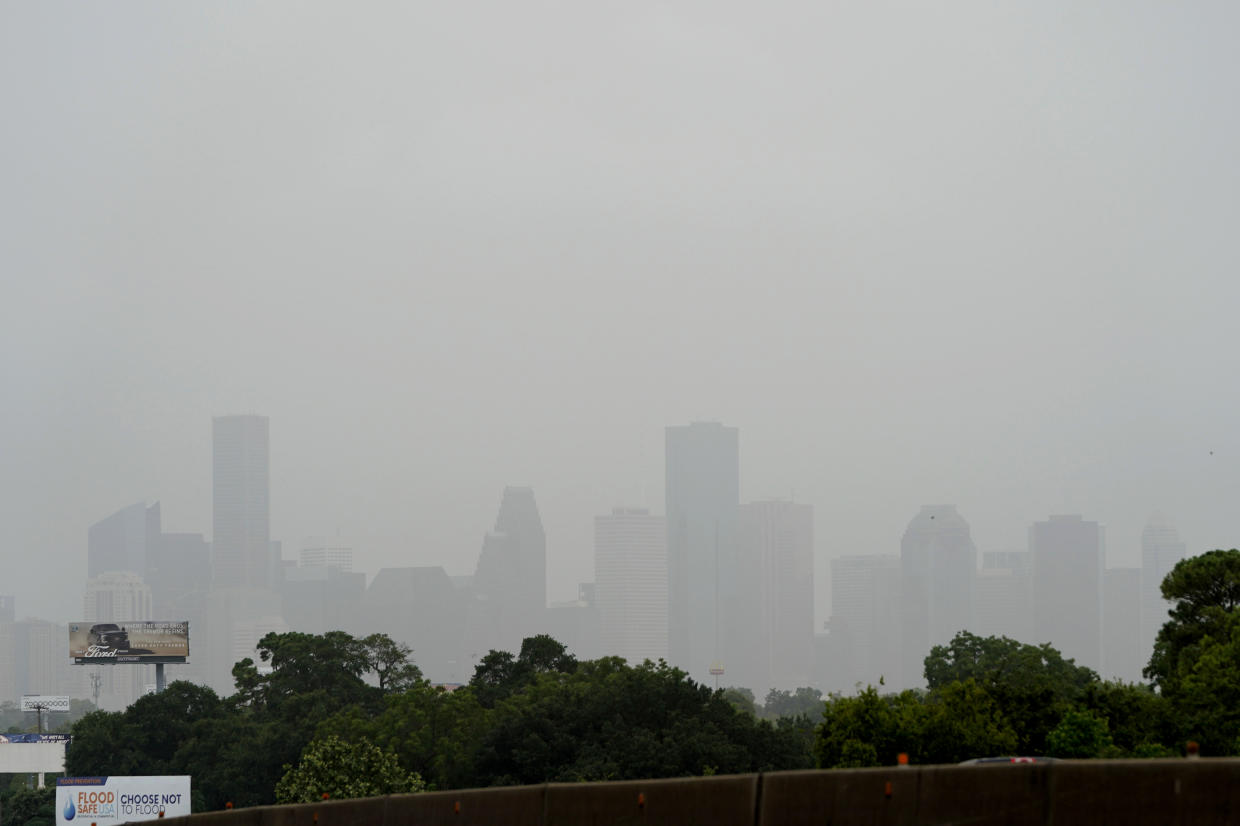 Most of the dust layer exists far above the surface — mostly between a few thousand feet above the surface to about 15,000 to 20,000 feet up. However, vertical mixing of the atmosphere and rainfall can bring that dust to the ground, and that's when it can become harmful to people with respiratory issues. ...

The dust plume is forecast to break into two chunks due to a split in steering flow in the mid levels of the atmosphere, which will act as a guide.

One part of the dust cloud will be pulled northward from Texas through the Plains States and Midwest this weekend, and even to the Canadian border on Monday morning. The dust will diffuse and thin out dramatically by the time it reaches the nation's middle, but cities like Kansas City, Minneapolis and Chicago will see a hazier than normal sky. The dust in the atmosphere will also make for some especially vivid sunrises and sunsets.

[okay it sounds better in my head...

]
Gazer Into the SovCit Abyss
Top

Looks awful! Reminds me of India, we were there in 2013. The worst place was Chennai, I could hardly breathe there and we only stayed one night. Most of the street people, and there were lots, burned garbage to cook on, mostly plastic stuff or whatever they could find...

Chennai.jpg
You do not have the required permissions to view the files attached to this post.
Birfers are toast
Top

Just looked out a window. The dust is here!

Make sure you check out the sunset. I bet it’ll be spectacular.
MAGA - Morons Are Governing America
Top

Book your place in the queue at the car wash !

(CNN) Georgia officials warned this weekend about potential health problems related to the Saharan dust cloud hovering over the state.

The Georgia Department of Public Health said Saturday the dust cloud is expected to hang around for the next few days and people, especially those with chronic lung conditions, should protect themselves.

The dust plume originated in Africa earlier this year, when a combination of weather factors led to dust kicked up by storms in central and west Africa gathering into a dense plume, which was pushed about 5,000 miles toward the US.

It's normal for Saharan dust to reach the US every hurricane season, but this year's cloud is historic, forecasters said. Georgia health officials say the dust is the densest it's been in 50-60 years.

Air quality alerts related to the dust are posted across portions of the Ohio River Valley, mid-Atlantic and Southeast, CNN meteorologists said Sunday.

The dust can cause eye, nose and throat irritation and those with allergies or asthma may experience wheezing.

We're not only wheezing and hacking, but a bunch of us are in actual pain from the barometric pressure, not to mention the literal dust on everything. And those promised spectacular sunsets? Nope.
Top

Get your Sharpie out, Governor. You can change where it's going. Plague and pestilence. It started with the 2016 election.
Trump: Er hat eine größere Ente als ich.