EVERYONE PLEASE READ THE Change Password thread please. (that's a link)
If we really have compromised passwords, I need to know so I can take action.
As always, you can dismiss this message by clicking the little X (hover your mouse over the far right).

Apparently Michael Moore found some footage that were outtakes from his Fahrenheit 11/9 movie that has the MagaBomber in it:

Off Topic
I see some MAGAite brought what looks like a terrified geriatric chihuahua to the "rally." [expletives deleted]

Investigators searching a white van belonging to Cesar Altieri Sayoc, a 56-year-old former exotic dancer who has been charged with sending more than a dozen bombs through the mail, found soldering equipment, which is typically used to join pieces of metal together, law-enforcement officials said. Other materials, such as stamps, a printer and paper, were also found in the van, the officials said. ...

Authorities also executed a search warrant on a trailer linked to Mr. Sayoc near where he was arrested. Inside the trailer they found accordion file folders with “bomb-making material,” a federal official said. ...

Mr. Sayoc has been charged with five counts of crimes, including interstate transportation of an explosive, illegal mailing of explosives and making threats against former presidents.

He is set to appear in federal court in Miami on Monday and expected to be transferred to New York, where he is being charged. A spokesman for the U.S. attorney’s office for the Southern District of New York, which is prosecuting the case, said Mr. Sayoc would be appointed a lawyer on Monday.

Surprisingly, many reporters were unfamiliar with GAB. They should be Fogbow members! Anyway, 24 hours later...

Gab, the controversial social network with a far-right following, has pulled its website offline after domain provider GoDaddy gave it 24 hours to move to another service. The move comes as other companies including PayPal, Medium, Stripe, and Joyent blocked Gab over the weekend. It had emerged that Robert Bowers, who allegedly shot and killed eleven people at a Pittsburgh synagogue on Saturday, had a history of posting anti-Semitic messages on Gab.

GoDaddy confirmed its decision in a statement to The Verge. “We have informed Gab.com that they have 24 hours to move the domain to another provider, as they have violated our terms of service. In response to complaints received over the weekend, GoDaddy investigated and discovered numerous instances of content on the site that both promotes and encourages violence against people.”

Gab is presently inaccessible through its website, with a message stating that the company is “under attack” and “working around the clock to get Gab.com back online” with a new provider. “We have been smeared by the mainstream media for defending free expression and individual liberty for all people and for working with law enforcement to ensure that justice is served for the horrible atrocity committed in Pittsburgh,” the statement reads.

Yesterday Gab’s Twitter account said that the network would “likely be down for weeks” because of hosting provider Joyent’s decision to pull support, though a more recent tweet today suggests it will be “back soon.” GoDaddy similarly cut off support for neo-Nazi news site the Daily Stormer following an article that was published about Heather Heyer, who was killed during the protests in Charlottesville last year. Meanwhile, major companies like Apple, Google, and Microsoft have taken various steps to remove Gab from their platforms.

Thought I heard a toilet flush. What will Miki Booth and her QAnon freaks do now? Here's what you get:

Gab Medium.JPG
You do not have the required permissions to view the files attached to this post.

No platform for neo-fascists? I'm comfortable with that!

Too bad for them

Also he's in jail. I don't think they provide any voting machines in jail. Election is a week from mañana. Does he haz time to send for an absentee ballot? Because he's gonna be absent for a long time.

Another suspicious package addressed to CNN has been intercepted. This time in Atlanta. All mail is being screened off site. Note from Jeff:

Or some bad routing.

That thought crossed my mind as well. Not that anyone is going on this morning about the wicked fake news people.

@javimorgado
6m6 minutes ago
More
CNN has obtained a photograph of the suspicious package sent to our network in Atlanta that is similar in appearance to ones authorities say were sent by serial bomb suspect Cesar Sayoc. The suspected mail bomb is addressed to "CNN" and mailed to the CNN Center in Atlanta. 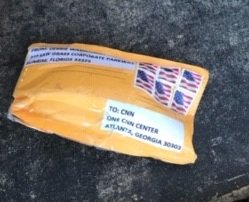 I'm wondering if they will release the list of the hundreds he was mailing stuff to. I'm just curious who is on the list. Probably everyone Trump has spoken out again.

Dr. Kenneth Noisewater wrote: ↑Mon Oct 29, 2018 12:24 pm I'm wondering if they will release the list of the hundreds he was mailing stuff to. I'm just curious who is on the list. Probably everyone Trump has spoken out again.lied about.

I hope the FBI is warning the people and institutions on that list.

The man accused of sending pipe bombs to prominent Democrats and CNN last week had a list of over 100 people he planned to target, NBC News reported.

I've heard this bull before.

Reports of a suspicious package at The New York Times Midtown building caused a scare on Monday evening.

The NYPD responded to the Gray Lady offices on Eight Ave. between W 40th and 41st St at about 8 p.m.

Earlier in the day, the FBI notified the paper that a Times editor was on a list of potential targets kept by the suspect who allegedly sent bombs to high-profile liberals and critics of President Trump, according to an email the paper sent to staffers about the incident.

A suspicious envelope addressed to that editor — that sources said looked similar to those allegedly sent by Cesar Sayoc Jr. — was discovered in a newsroom mailbox Monday evening.

But an initial scan of the envelope showed only paper inside, sources said.

The NYPD bomb squad confirmed the package was harmless, giving the all-clear at about 9 p.m.

Donald's on Laura Ingraham tonight being a total idiot. It's hard to know who is more of an idiot, Donald or Laura. Laura is hyping the interview and here's my tweet:

Man, you have great big brass ones, orlylicious.

Orlylicious wrote: ↑Mon Oct 29, 2018 10:20 pm Donald's on Laura Ingraham tonight being a total idiot. It's hard to know who is more of an idiot, Donald or Laura. Laura is hyping the interview and here's my tweet:

AUSTIN — The Florida man who allegedly sent pipe bombs to President Donald Trump's critics also had Texas Congressman Beto O'Rourke and at least one state lawmaker who received a suspicious package this week in his sights.

It's unclear whether O'Rourke was included on a list Sayoc had kept of about 100 people he considered potential future targets. On Wednesday, Evans said, "No one said 'you are on a list' but there was immediately a presence including agents and dogs who were at the office even as recent as today."

Sayoc also researched mailing addresses for Rep. Poncho Nevarez, a Democrat who represents parts of Texas along the U.S.-Mexico border, the state lawmaker said the day after he received a suspicious package at his Capitol office.