This is meant as a happy, upbeat topic about the amazing music and art being created during this awful worldwide event.


DJ Nice has been spinning on Instagram Live, the other night over 100,000 attended including Oprah, Michelle Obama, Rihanna, Murphy, Biden, Sanders. They were talking in the chat, it was really cool. More to come.


Live shows with Broadway Stars for the Actors Fund -- Live right now and there's a night show too -- it's an all Sondheim day. Tonight is at 7pm Eastern because Rosie O'Donnell's one night only show is at 8pm. (Disclosure, my buddy Seth Rudinsky is one of the guys putting this together)

The other shows are here:
https://www.youtube.com/user/actorsfundorg/featured


Here's the link for the The Rosie O'Donnell Show LIVE! Give #withme to The Actors Fund, 7pm Eastern:

Oh wait, we're trying to get AWAY from the horror.

That's a fabulous idea, how cool for you to think of it!! 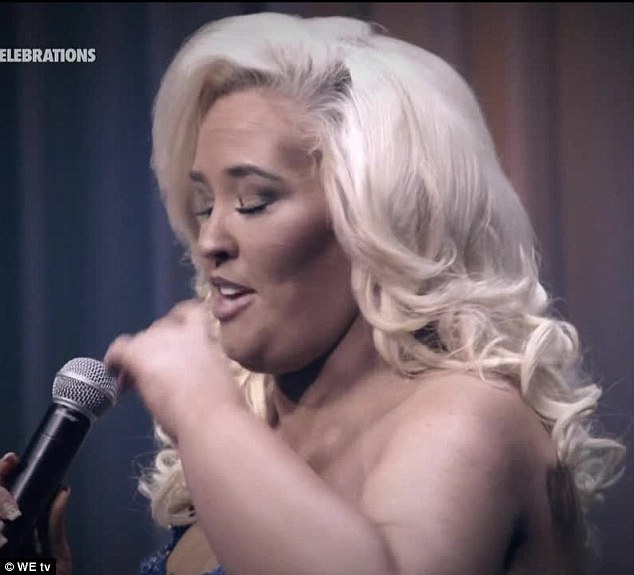 This isn't new but for your enjoyment and something to try with the family...

How many marshmallows can you fit in your mouth while rapping a Kanye West song? Mama June and Honey Boo Boo accept the challenge with the lyrics to Yeezy’s song “Lift Yourself.”

And who can forget this wonderful family entertainment, the whole family, including the matriarch, busts a move -- Do the Honey Boo Boo Bop!

Movin' up by Alana Thompson aka Honey Boo Boo and featuring viral video artist Adam Barta as well as her sister Lauryn Shannon aka Pumpkin. Also appearing in the video is Mama June and Mike Thompson aka Sugar Bear all dancing and doing the Honey Boo Boo Bop.

Thanks for bringing this up! Foggy, if you were at the Seminole Hard Rock right now, you could be filming the titular Mama June

Yeah, darn it all. I'm washing my hair tonight.

Fox Corporation and iHeartMedia have teamed up to provide entertainment and support for Americans during the coronavirus pandemic with a special event on Sunday night hosted by music legend Elton John.

“FOX Presents the IHeart Living Room Concert for America” will air on Sunday at 9 p.m. ET on all FOX platforms and iHeartMedia radio stations nationwide. The special concert event will pay tribute to front-line medical professionals working to treat coronavirus patients, first responders, and local heroes while soliciting donations from viewers and listeners.

The commercial-free event will feature performances by Alicia Keys, Backstreet Boys, Billie Eilish, Billie Joe Armstrong, Mariah Carey, Tim McGraw and others, all playing from their homes on their personal cell phones, cameras and audio equipment, to ensure the health and safety of all involved as Americans adapt to social distancing.

The special event will support Americans who have been resilient as the nation attempts to fight the spread of the COVID-19 virus. Viewers will be encouraged to support two of the many charitable organizations helping victims and first responders during the pandemic: Feeding America and First Responders Children’s Foundation.

Cool! The Internet Archive has stopped the waitlists so you can check out 1.4 million of books right away. Tons of out of print books. Mentioned when found it with John Waters' book of screenplays -- now you just pick your title and start reading. Hope you find some fun reads.

There's a whole page of Vattel

During this unprecedented time in history, access to printed books is becoming difficult or impossible. COVID-19 is forcing students, educators, and everyday readers to rely on digital books more than ever before. That’s why the Internet Archive has temporarily suspended all waitlists, allowing you to immediately check out any of the 1.4 million books currently in our lending library. Until June 30th or the end of the US national emergency (whichever comes later), every borrowable book will be immediately accessible by anyone—creating, in effect, a National Emergency Library.

As of March 19th, almost a billion students around the world have been affected by school closures, obstructing their access to educational materials. Thousands of community and academic libraries have been forced to close their physical locations as well, further complicating the lives of readers. We hope that this new policy will provide everybody with the resources to keep reading—whether you need classic literature, science textbooks, genre fiction, or even just bedtime story material. We have also doubled the number of books you can check out at a time from 5 to 10, so borrow away!

All these materials can also be found on Open Library—our online catalogue of published books. And not only can you find books in Open Library, but you can also curate and share reading lists, browse by genre to find new discoveries, and easily share what you're reading on social media. If we don't have the book in our collection, then the Sponsor A Book feature lets you decide what we digitize next!

These have been fun, hope you've had a chance to check it out:

Since Wednesday March 18, DJ D-Nice has been hosting Club Quarantine, a.k.a. "the biggest party in the world"—virtually, via an Instagram Live that quickly went viral, growing larger by the day. Saturday night's coronavirus quarantine dance party—which he calls "Home School"—drew in guests like Jennifer Lopez, Rihanna, former First Lady Michelle Obama, Ellen DeGeneres, Vice President Joe Biden, Senator Bernie Sanders, and our very own Oprah and Gayle King. And some "partygoers" have even found love!

Here's everything we know about DJ D-Nice's Instagram Live "Club Quarantine" dance parties, including how you can watch. In a pre-coronavirus world, for many folks, Saturday nights might have meant dance parties at clubs all around the country. But as we're all social distancing, thanks to DJ D-Nice, any person anywhere can be part of one giant dance party at the same time—via Instagram. Since Wednesday, the DJ, who is also a well-known photographer and is credited for discovering several artists, including Kid Rock, has been inviting his followers to join him for a virtual dance party he's calling "Home School"—or "Club Quarantine," as fans have affectionally called it—on Instagram Live.

Guests including Janet Jackson, Justin Timberlake, and John Legend popped in to the "party" throughout the week, but on Saturday the party got lit, as the kids say, with guests including Michelle Obama, Jennifer Lopez, Rihanna, Ellen DeGeneres, and our very own Oprah and Gayle King. Even Democratic presidential candidates Vice President Joe Biden and Senator Bernie Sanders joined in on the fun, which as of publish time had at one point reached upwards of 100,000 live viewers.

As D-Nice spun tracks by artists including Rihanna and Janet Jackson, he shouted out his special guests—even joking that perhaps guest Mark Zuckerberg, founder of Facebook, might "buy out the bar" for all of the guests. As he played dance tunes, followers commented on what a nice break the jam session was as we're all social distancing. Many also remarked on the power that music and dance has to change the world. On CBS This Morning on Monday, Gayle interviewed the DJ, telling him she "got out of her bed and home dancing around the room in my t-shirt." D-Nice told her he came up with the idea after being home self-isolating and realizing that outside of missing his family, he also missed DJ'ing for people. So he decided to throw a party. "It was supposed to just be for my friends on Instagram, and the next day, I looked up from the turntables and noticed that the crowd had started to grow," he told Gayle.
***
After a week of special guests—which have included virtual "partyers" like Gabrielle Union, Angie Martinez, Common, Dave Chappelle, and more—Oprah interviewed D-Nice on her "Oprah Talks" Apple TV series to talk about what the experience has been like.
"I woke up on Sunday morning after the big night, and to watch my social media following go up from 200,000...and by the end of the next day, it was at 1.3 million," he said. "When I woke up, I felt a bit overwhelmed, because in the moment I didn't realize I was doing something special. You're just doing what feels good, but I didn't realize it was special until that next morning, and I had tears. I've been in the music industry for over 30 years...but nothing felt like that, helping people. It was selfless and self-serving as well, because I was isolated too, and I just wanted people to feel good." If you missed the party on Saturday night, not to worry: D-Nice is keeping the jam session going daily on his Instagram. You can be a part of "the biggest party in the world" by following D-Nice on Instagram at @dnice and tuning in to his "Lives." And you can also tune in to his favorite uplifting dance tracks on his "Homeschool" Spotify playlist.

61,000 people including Oprah, Amy Schumer and Timbaland joined the March 25 'couch party' co-hosted by DJ D-Nice and Michelle Obama.
With his dance party Instagram livestreams becoming a sensation amidst the worldwide quarantine, Brooklyn DJ D-Nice yesterday (March 25) mixed classic records for a great cause -- with some help from former First Lady Michelle Obama.

D-Nice and Obama turned the evening set into a registration extravaganza, hosting the "couch party" in collaboration with Obama's voter registration organization When We All Vote.

Prior to going live, the initiative announced a goal of reaching 50,000"voters via its texting platform, Outvote. Ultimately, Outvote received text messages from 407,824 eligible voters and helped nearly 13,000 people start or complete the voter registration process, according to a spokesperson for When We All Vote.

Hugh Jackman in "Oklahoma!" on Broadway - Available for free all weekend! (click on the link in the article)

Thanks for promoting that MRich, it's a great production!

I was at the opening night in London, still one of the most beautiful Broadway scores.

Oklahoma was the first Broadway musical to incorporate ballet and dance integrally -- previously, songs wouldn't advance the plot or action much, they were outside the story. Agnes deMille's choreography was thrilling and turned Oklahoma into a dividing line of the American musical theatre.

Funny story -- in high school, I was doing a paper on this subject and was able to get Celeste Holm (the original Ado Annie) on the phone for an interview. I was so excited! So the call connects, and I'm like, Miss Holm, what an honor to speak with you. What was it like in the original Oklahoma? Her reply? "That was fifty fucking years ago." I was crushed

If you like Broadway, BroadwayHD is great, you can just get a month for $8.99 and there are tons of shows, including lots of Cirque de Soleil and british productions. You can see all the shows at the link MRich provided.
6/12/20 Urine Drug Screening Tonight! Don't miss The Fogbow's Favourite TV Show™ starring the titular Mama June Shannon -- "Mama June: Family Crisis!" Fri 9/8c. TVShowsAce featured Fogbow's love 5/26/20: https://bit.ly/2TNxrbS
Top

This gave me goosebumps. Cantus is a Minnesota male ensemble. They recorded this piece last week, all standing the required distance apart.

Videos at the link, cheers

You lose track of the days, so you don't get jazzed about the weekend. You've already binge-watched Tiger King, you're sick of eating chips and salsa, and you've arranged your sock drawer (twice). It's time for a cooking lesson!

The Call to Unite event will kick off Friday evening to offer performances and conversations about overcoming the challenges of the coronavirus pandemic. Event organizers hope participants can help inspire people to “emerge from this crisis better than when it began.”

Each participant will answer calls in their own way, whether through performing a song, sharing a story or offering a prayer.