It would be nice if one of the Dems asked Sondland how many times he talked to BenadickDonald.

The EU will not like to hear that they are considered unimportant, that the Ambassador to the EU is only on speaker phone when in the Ukraine

Sam Stein
@samstein
·
1h
ha. what. Sondland scheduled a flight this afternoon to Brussels? Did he not think that maybe this might go on a bit???

TexasFilly wrote: ↑
Wed Nov 20, 2019 1:42 pm
Jeffrey, you should know that Neal Katyal is one of the premiere appellate lawyers in the country. He was the Acting Solicitor General for a time in the Obama administration.

I don’t know these things so I gotta ask people that do.
Top

Thank you all for posting. My anxiety won't let me watch.

Did Castor go to Taft?

This is wild watching the GOP fail. Good week for the Hattie McDaniel avatar

Bill Mitchell is flailing... he is actually using a TASS and Pravda story that some MP in Ukraine is DRAFTING an impeachment. Bill and his ilk have taken that all the way to its conclusion.


Joe Biden’s son and his partners received $16.5 million from Burisma — Ukrainian MP
According to the politician, Hunter Biden was paid by laundered money for his services for Ukraine's Burisma Holdings energy company

KIEV, November 20. /TASS/. The Ukrainian Office of the Prosecutor General has drawn up an indictment against the owner of the Burisma Holdings energy company, ex-Ecology Minister Nikolai Zlochevsky, that contains information that the son of former US Vice President Joe Biden, Hunter, as a Burisma board member along with his partners received $16.5 million for their services, Ukrainian Verkhovna Rada MP from the ruling Servant of the People party Alexander Dubinsky told a press conference on Wednesday, citing the investigation’s materials. According to him, the money came from duplicitous criminal activity.

"Zlochevsky was charged with this new accusation by the Office of the Prosecutor General but the press ignored it," the MP said. "It was issued on November 14."

According to the politician, "the son of Vice-President Joe Biden was receiving payment for his services, with money raised through criminal means and money laundering." He also clarified that "Biden received money that did not come from the company’s successful operation but rather from money stolen from citizens."

Brian Klaas@brianklaas
Something tells me Obama’s notes didn’t look like this.

Now one can estimate just how bad dotus' eyesight is

Apparently Ken Starr is on Fox News saying that GOP Senators should consider having "the talk" with Donald.

The Bill Scumbag Mitchell stuff is a small taste of what was going to be dumped out there as soon as Ukraine announced the investigations. They had all this stuff ready, might as well dump it now.
Top

Agents asked to speak with him last month but never did, though the bureau made clear to his lawyers that he was not the target of an ongoing investigation.


WASHINGTON — The F.B.I. sought last month to interview the whistle-blower who helped ignite the impeachment inquiry as a witness in an ongoing investigation, several people familiar with the matter said.

The interview never took place. It is not clear why agents wanted to talk to the whistle-blower, a C.I.A. analyst, or how interested they remain in speaking to him.

The F.B.I. contacted lawyers for the whistle-blower and did not use his name in making the request. The whistle-blower’s account of the effort by President Trump, the president’s personal lawyer, Rudolph W. Giuliani, and administration officials to push Ukraine to pursue investigations that would benefit Mr. Trump politically became a road map for the House’s impeachment investigation and has been largely corroborated by subsequent testimony.

The F.B.I. made clear to his lawyers that the whistle-blower was not the target of any ongoing investigations, according to people familiar with the matter.

The whistle blower is not a whit relevant after all the juicy testimony.
Top

Rudy.JPG
You do not have the required permissions to view the files attached to this post.
Hey! Don't miss The Fogbow's Favourite TV Show™ starring the titular Mama June Shannon -- "Mama June: From Not To Hot -- Family Crisis!" Fri 9/8c. TVShowsAce featured Fogbow's love 5/26/20: https://bit.ly/2TNxrbS
Top

Good riddance to Rep. Will Hurd. He's a Trumper through and through. Shame on him. Let's get a Democrat to win his seat in 2020.
Top

Now we know where the Trump crime family's kick-back is.
Top

"[Moderate] doesn't mean you don't have views. It just means your views aren't predictable ideologically one way or the other, and you're trying to follow the facts where they lead and reach your own conclusions."
-- Sen. King (I-ME)
Top

Sekrit Stuffs!
TOLD YOU SO!
The other evening one of the local news stations did a report on the 20th Anniversary of the Bonfire Disaster. They showed a sepia tinged interview of one of the students present. He looked very familiar. I rewound it. It was Will Hurd. No implication here that Aggies are all hopeless. Just a tidbit.

Hurd won re-election last year by about 1000 votes. His decision to "retire" is likely predicated on that.
I love the poorly educated!!!

Tes would've had a great timeline for us, but just thought this might be of interest:

Vice President Pence was informed just before meeting with the president of Ukraine in September that a U.S. ambassador believed that stalled military aid to Ukraine would probably not be released until Ukraine agreed to announce political investigations sought by President Trump, the ambassador testified Wednesday.

Gordon Sondland, the U.S. ambassador to the European Union, told the House Intelligence Committee that he informed Pence of his fears just before Pence met with Ukrainian President Volodymyr Zelensky in Warsaw on Sept. 1, a meeting where Sondland anticipated that Zelensky was likely to ask about frozen U.S. aid.

The testimony is the first indication that Pence may have known that congressionally appropriated funds for security assistance was conditioned on a foreign power agreeing to open investigations to assist Trump’s political prospects. The Ukrainians were being pressured to announce probes into Burisma, a gas company that hired former vice president Joe Biden’s son, and a debunked assertion that their country interfered in the 2016 campaign, according to congressional testimony and text messages.

Sondland’s account was immediately disputed in statement by Pence’s chief of staff, Marc Short, who said that Pence “never had a conversation with Gordon Sondland about investigating the Bidens, Burisma, or the conditional release of financial aid to Ukraine based upon potential investigations.”

He said that Sondland was “never alone” with Pence on the Poland trip and that the alleged conversation “never happened.”


Rolling Stone: The Ukraine Quid Pro Quo Case Is Getting Close to Mike Pence and He’s Not Happy

I've been in meetings all day, just browsing the forum in between. So, I'm listening to Sondland testify now. Major scumbag. Maloney hit him pretty damn hard - that was quite satisfying, Sondland deserves it.
"I know that human being and fish can coexist peacefully"
--- George W Bush

Brian Klaas@brianklaas
Something tells me Obama’s notes didn’t look like this. 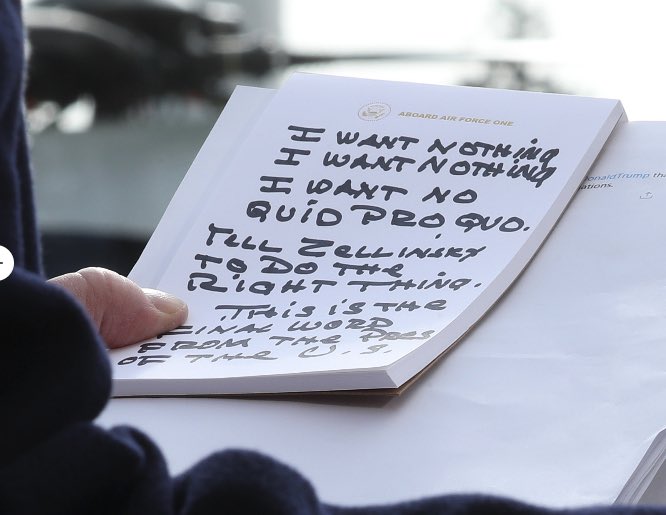 ED2C83B5-60F9-4343-9D57-D80E2045CB52.jpeg
You do not have the required permissions to view the files attached to this post.
I am not "someone upthread".
Trump needs to be smashed into some kind of inedible orange pâté.
Top

My general impression, and this is based on only about 1/2 hour I was able to watch, Sondland is trying to say Trump is guilty and Trump is innocent. He really does think he can say A is true and A is false.