There's a pay wall for the WSJ article.


According to the editorial board of the conservative Wall Street Journal, Republicans must band together and strip President Donald Trump of some of his trade powers before he does irreparable damage to the U.S. economy.

Under the headline, Congress vs. Trump on Tariffs, the board blamed Democrats for the laws that have allowed the President to impose tariffs — citing national security — before saying the GOP needs to “rein” Trump in.

“Republicans have complained for years that the executive has encroached on the powers of the legislature, but the GOP hasn’t done much to stop the invasion. This week a bipartisan coalition in the Senate is finally rebelling against the Trump Administration’s unilateral trade war, and we’re glad to see it,” the editors wrote, adding that they are encouraged by push-back from Tennessee Sen. Bob Corker (R).


"To argue with a person who has renounced the use of reason is like administering medicine to the dead." -- Thomas Paine

There's no way back
from there to here

Oh god, she wasn't using that phony British accent again, was she?

I hope y'all are still wearing your seat belts!

From a view from CBC (Canada)


"They did discuss NAFTA at length and they discussed the future of NAFTA, and I would say they also talked about accelerating the talks."

But two sources with direct knowledge of the situation told CBC News that Canada has heard this kind of positive rhetoric from Trump before — without seeing results at the NAFTA negotiating table.

One source described Friday's meeting as a "frank" airing of grievances in a "non-emotional setting," adding that Trump appeared surprised that Canada had responded so vehemently to the U.S. tariffs.


LA MALBAIE, Quebec — President Trump aggressively confronted America’s closest allies on Friday as they convened their annual summit meeting, calling for Russia’s readmission to the Group of 7 nations and refusing to ease his assault on the global trading system.

The response from the leaders of Europe, Canada and Japan was swift and angry. Most rejected the return of Russia, which was ousted from the diplomatic forum after President Vladimir V. Putin violated international norms by seizing parts of Ukraine in 2014. And they assailed Mr. Trump’s embrace of protectionism as illegal and insulting.

At a meeting devised for cooperation and comity, public smiles and descriptions of “cordial” conversations were undercut by what officials said was a struggle to agree on a common direction. The likelihood grew that the United States could be frozen out of a joint statement of principles by the countries that have so often followed America’s lead.

“The rules-based international order is being challenged, quite surprisingly, not by the usual suspects, but by its main architect and guarantor, the U.S.,” Donald Tusk, the president of the European Council, said as the summit meeting got underway in Quebec’s picturesque resort town of La Malbaie on the banks of the St. Lawrence River.

I'm convinced dementia is not helping his already charming personality.


Ryan Lankford
@RyanLankford
Masterful trolling by Trudeau. Giving a picture of grandpa's whorehouse as a gift,and reminding the subhuman filth Game Show Host In Chief subtly what kind of scum he comes from.

followed by tweet by SHS with photo of Trump's grandfather's Canadian...hotel.

twitler gave a statement and a news conference this morning a little after 10 AM EDST. I had AM Joy on. I turned it off when he came on, but kept checking in to see when he was done. He sounded grumpy and out of it every time I turned it back on. Maybe it got "better"?

"To argue with a person who has renounced the use of reason is like administering medicine to the dead." -- Thomas Paine

Summary of the G7 meeting so far: 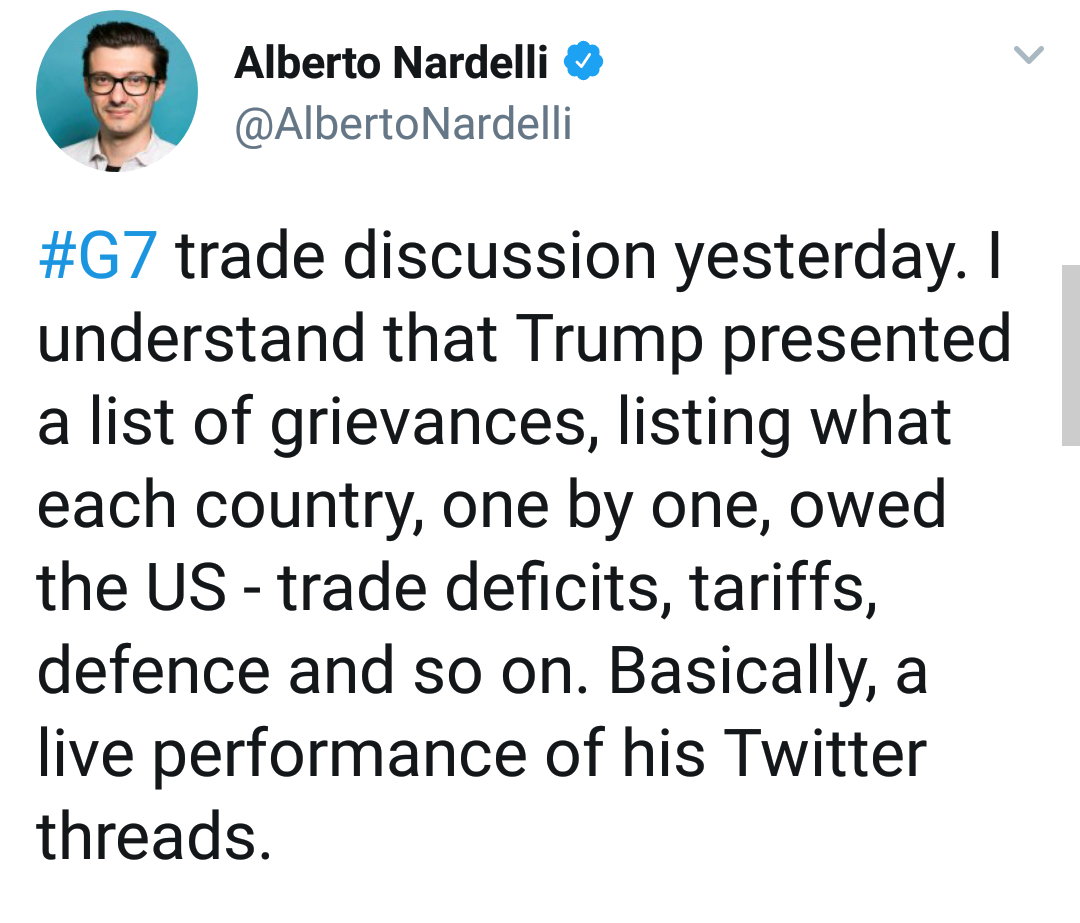 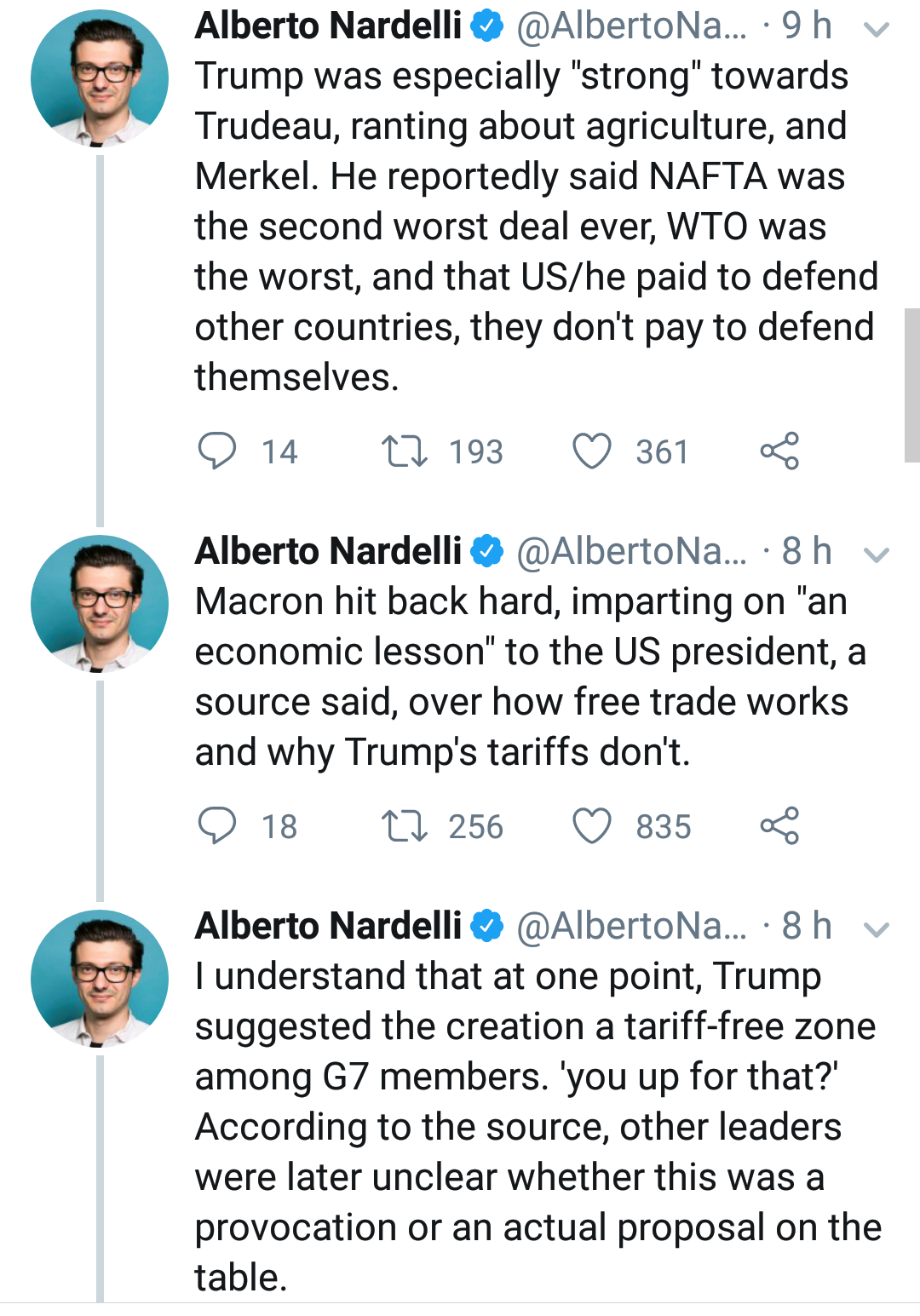 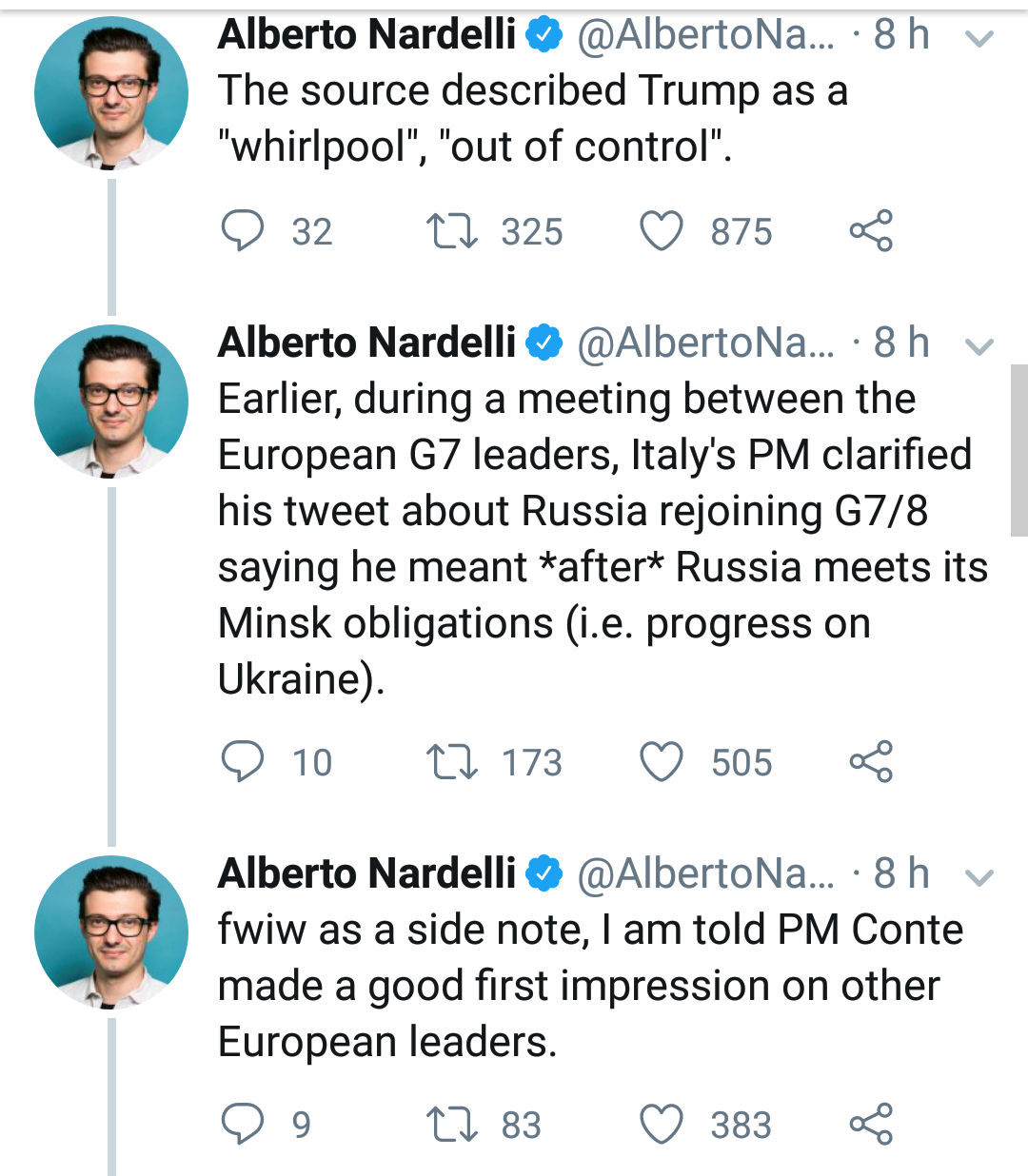 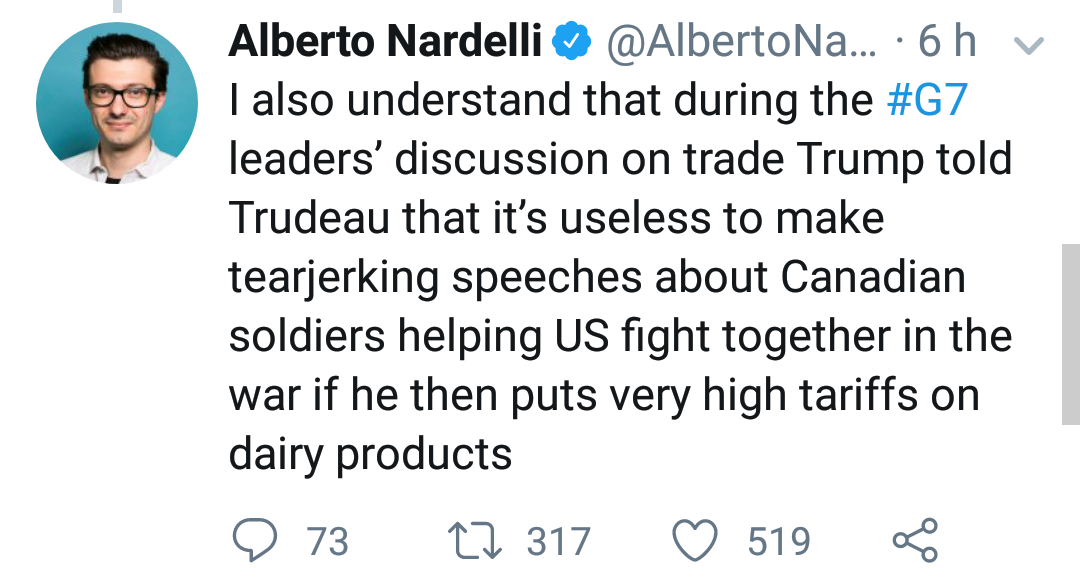 And in a rather funny aside, we have Steel tariffs that steel workers DON'T support 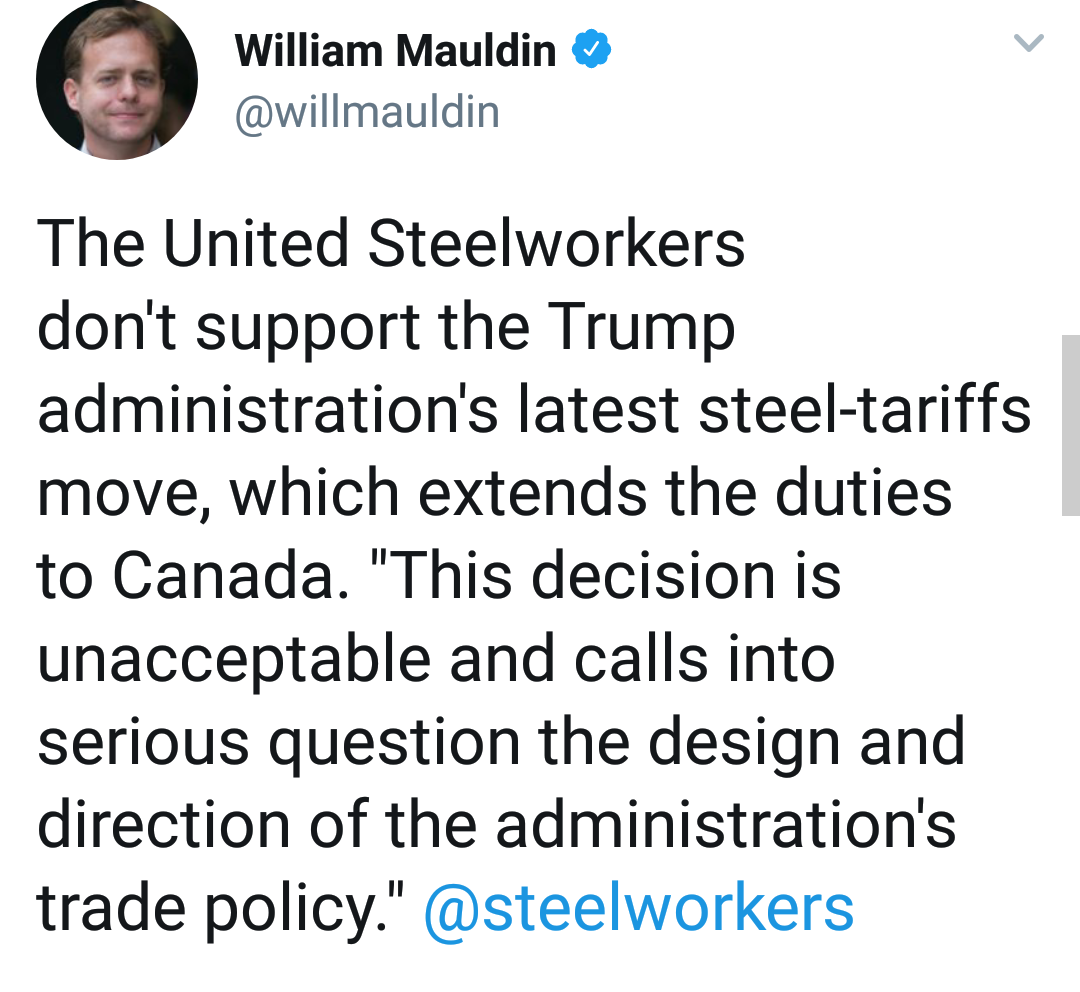 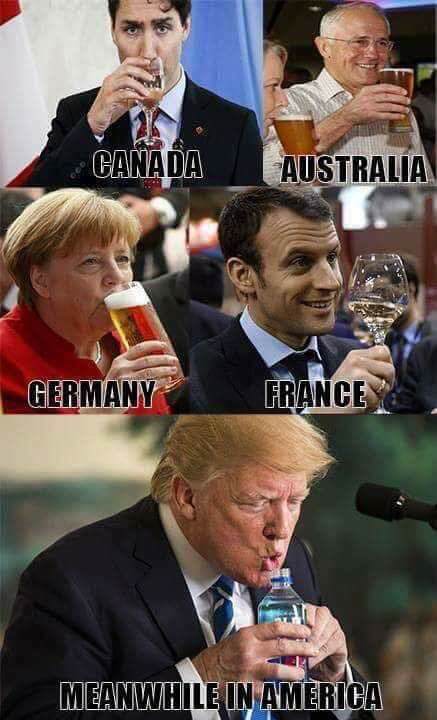 In a remarkable pair of acrimony-laced tweets from aboard Air Force One as he flew to a summit with North Korea’s leader, Mr. Trump lashed out at Justin Trudeau, the prime minister who hosted the seven-nation summit, accusing him of making false statements.

Literally moments after Mr. Trudeau’s government released the joint statement, saying it had been agreed to by all seven countries, Mr. Trump blew apart the veneer of cordiality that had been in place throughout the two days of meetings in a resort town on the banks of the St. Lawrence River.

“Based on Justin’s false statements at his news conference, and the fact that Canada is charging massive Tariffs to our U.S. farmers, workers and companies, I have instructed our U.S. Reps not to endorse the Communiqué as we look at Tariffs on automobiles flooding the U.S. Market!” Mr. Trump wrote.

“PM Justin Trudeau of Canada acted so meek and mild during our @g7 meetings,” Mr. Trump said in a second tweet, “only to give a news conference after I left saying that, ‘US Tariffs were kind of insulting’ and he ‘will not be pushed around.’ Very dishonest & weak. Our Tariffs are in response to his of 270% on dairy!”

The two DOTUS quotes were tweets

Trudeau began Saturday’s first session on gender equality with wry remarks about “stragglers” before Trump belatedly took his seat, and when he was asked later whether he was happy Trump was planning to leave early, Trudeau had no answer, but Trump said, “He’s happy,” while sticking out his tongue.

Wow!!!! Donald Trump knows how to gain respect from other countries' leaders! He surely has convinced them that they are weak and must bend to his will. What a leader! Surely the bigliest deal maker ever! How wise those 62,984,828 American voters were! 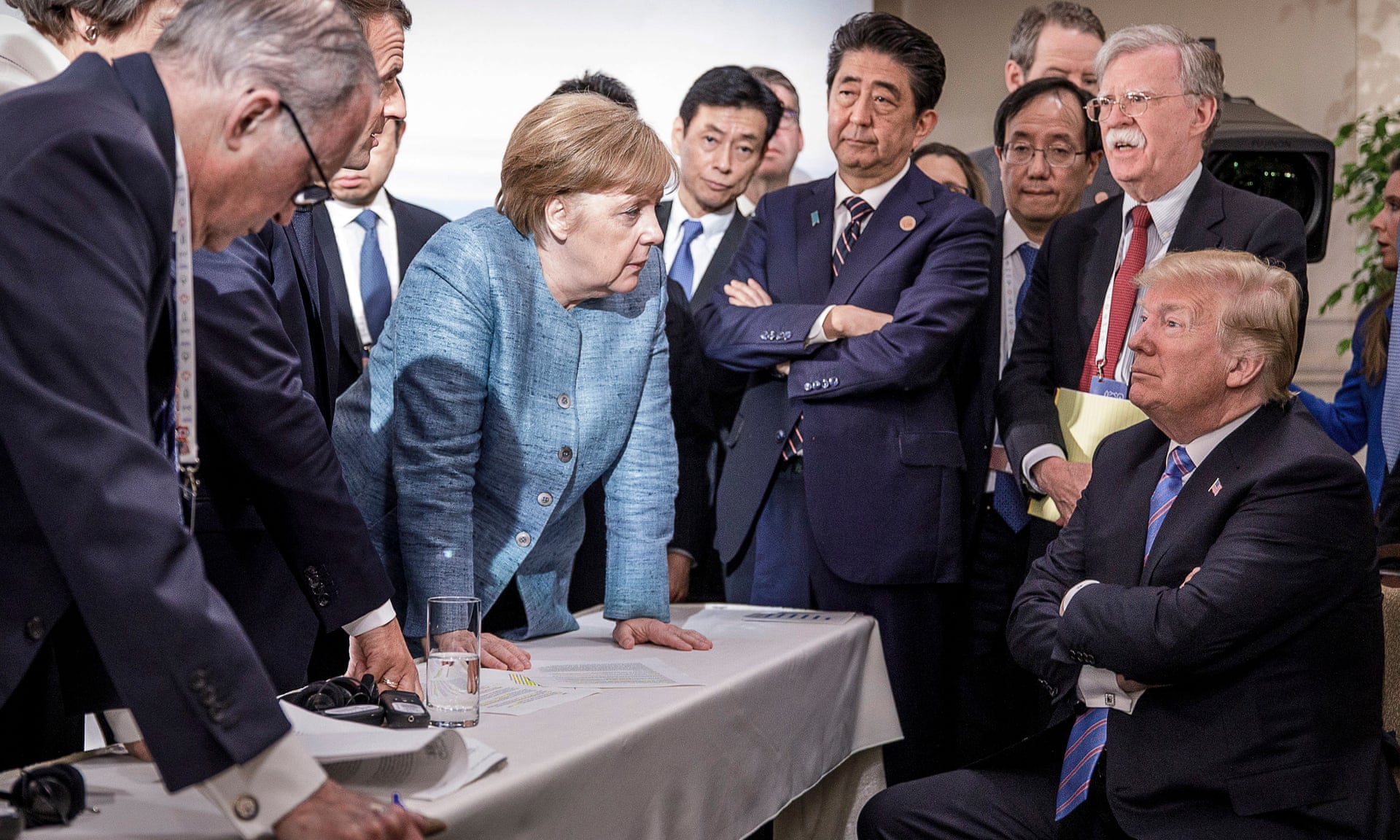 Mrs Merkel's photo has taken off on social media, spawning all sorts of memes and funny caption contests.

The posture and confident body language of the powerful German leader were highlighted by many on Twitter, who said it was reminiscent of a schoolteacher telling off a naughty student (President Trump).
https://www.bbc.com/news/world-us-canada-44426442

Donald Trump flew to Singapore on Saturday for the most momentous meeting of his presidency, a “one-time shot” summit with North Korea. He left behind a trail of confusion and frustration among traditional US allies.
Trump's trade tirade casts Canada in unfamiliar role of America's bad guy
Read more

The president departed a summit of the G7 major industrialised democracies in Quebec the same way he arrived, firing off threats of a trade war. His fellow leaders were warned not to respond to the steel and aluminum tariffs he has imposed on them.

“If they retaliate, they’re making a mistake,” Trump told reporters before leaving several hours early, ducking sessions on climate change and the oceans.

Trump later upped the ante with tweets saying he had asked US representatives not to endorse the joint communique put out by the G7 leaders because of Canadian prime minister Justin Trudeau’s “false statements” at a news conference.
https://www.theguardian.com/us-news/201 ... orth-korea 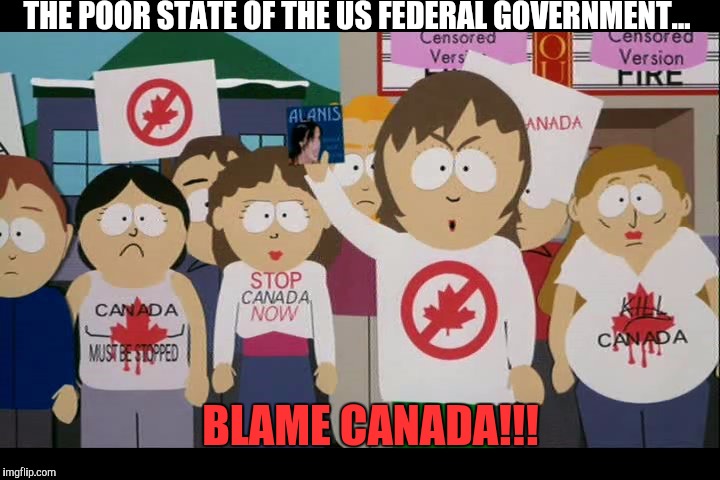 Can we be more mortified?

"The very least you can do in your life is to figure out what you hope for." - Barbara Kingsolver

Yessirree, that’s some “feel” ya got there, bub.

Wonder if his meeting with the North Koreans will go just as well?

It's all Canada's fault just like I've been saying all along, told you them Canadians was tricksey.

The fact that you sincerely and wholeheartedly believe that the “Law of Gravity” is unconstitutional and a violation of your sovereign rights, does not absolve you of adherence to it.

Trudeau began Saturday’s first session on gender equality with wry remarks about “stragglers” before Trump belatedly took his seat, and when he was asked later whether he was happy Trump was planning to leave early, Trudeau had no answer, but Trump said, “He’s happy,” while sticking out his tongue.

“If they retaliate, they’re making a mistake,”

I imagine the words "If he wants a trade war, let's give him a fucking trade war..." were muttered in various languages at closing parties up there in Quebec...That photo may very well be an epic comment on the Trump admin...Onward to Singapore...He seems to be in the perfect mindset to meet with Kim...

"I said we will sacrifice the economy in the short term to protect our people's health, people's lives!" - Nguyễn Xuân Phúc

I imagine the words "If he wants a trade war, let's give him a fucking trade war..." were muttered in various languages at closing parties up there in Quebec...That photo may very well be an epic comment on the Trump admin...Onward to Singapore...He seems to be in the perfect mindset to meet with Kim...

I doubt that: I suspect it was more "Trump's an idiot! How do we avoid his poisonous nonsense spreading into a trade war between the rest of us?"

Countries will be attempting to ensure that their economic security is not dependent on imports from or exports to the US. Require a basic material (e.g. soybeans) that you currently get mainly from the US? Find other sources, buy from them and try to encourage them to produce more of what you need. Largely dependent on US imports? Cultivate other markets for your products, adjusting the designs if that helps. 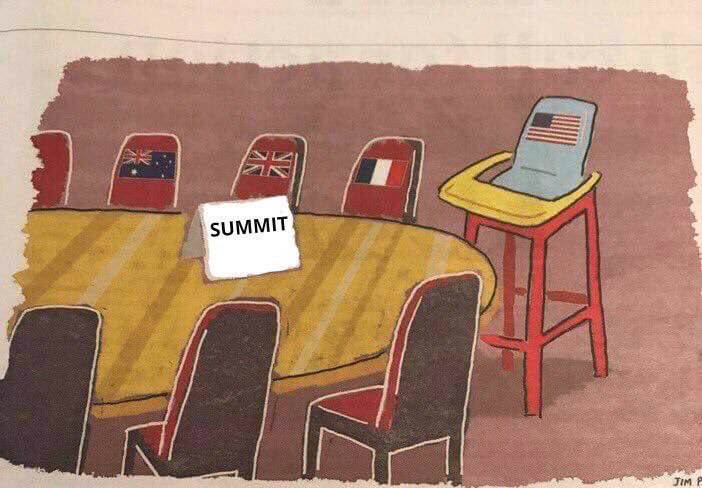