Do you have any reason to believe he wouldn't??

A better name for this epidemic would be the Trump Plague!
Top

Love to the wife

Love to the wife

My nephew 's wife experienced this after 9/11. A Bosnian refugee and Muslim, she wore a head scarf and long dress. He and we feared for her safety in Columbia, Missouri, one of the more enlightened cities in Missouri.
A 19th Amendment Centennial Moment:
The 19th Amendment was first introduced to Congress in 1878, yet it was not approved by Congress until 1919 – 41 years later.
- https://legaldictionary.net/19th-amendment/
Top

Some of our fellow countrymen aren't very bright. If the shoe fits them, they're already wearing it.
Trump: Er hat eine größere Ente als ich.

Lemme show you something...

Calling COVID-19 The Chinese Virus Is Not Racist

Gregg Evans Yes, it is
Edit or delete this

Kenneth Romero Cu Gregg Evans no it's not

Gregg Evans
Gregg Evans And finding a dozen Asians (out of 4 billion) who don't think so hardly proves the point... 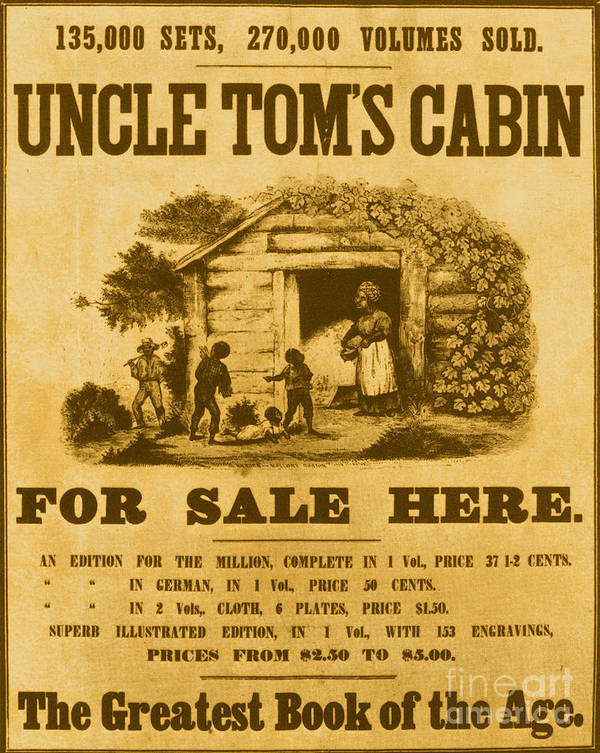 
Steve Ricketts Kenneth Romero Cu can just leave it as covid-19 virus. If you want to call it from origin of supposed start. China virus wuhan virus. It’s all wording but the general name convos-19 should suffice

Aaron Kraft Kenneth Romero Cu I love you bro...
s
Scott-Daisy Chambers Gregg Evans more than 4, my wife called it that before it was coined racist, talking to her family back home they use it and wuhan... but i guess since they aren’t yet truely Americans they don’t count.... but they are asian... dont worry i just call it germ warfare gone wrong... but i guess i might need a tin foil hat

Gregg Evans Its not that people say it, its that some people deliberately use it as an insult or to place blame for it on someone else. But go ahead, dude, whatever. When someone starts a sentence with "I'm not a racist but, ... " its been my experience that they're about to show that they're a racist, whether they know it or admit it or not.

Jason Perry Gregg Evans it did come from China. Trump called it the China virus because the CHINESE GOVERNMENT tried to cover it up at first and arrested the man that discovered it. They could've prevented 95% of this but their communist regime had to maintain control in the public eye. Later, they tried to blame this on U.S. troops. The China virus is referring to the Chinese government and rightfully so. It's not a shot on Asians.

For some bizzare context, Kenny Cu is half Chinese and the rest of those people I don't know very well....it went on for three days

What I'm thinking when someone I don't even know has been arguing for 3 days that saying China Virus isn't racist. I don't know who you are, dude, but this is how I picture you in my mind.

I just tell them that the "Spanish Flu" started in Kansas, and that generally brings the conversation to a screeching halt.
The difference between the Middle Ages, and the Age of the Internet, is that in the Middle Ages no-one thought the Earth was flat.
Top

LL wrote:Presiden Trump "Without Us You Wouldn't Even Have a Country Left"

President Trump “I think there are certain people that would like [the country] to do financially poorly because they think that would be very good as far as defeating me at the polls,” Trump responded when a reporter asked him if he based his Easter coronavirus timeline on his political interest during a White House briefing Wednesday evening.

The Environmental Protection Agency (EPA) issued a sweeping suspension of its enforcement of environmental laws Thursday, telling companies they would not need to meet environmental standards during the coronavirus outbreak.

The temporary policy, for which EPA has set no end date, would allow any number of industries to skirt environmental laws, with the agency saying it will not “seek penalties for noncompliance with routine monitoring and reporting obligations.”

Cynthia Giles, who headed EPA’s Office of Enforcement during the Obama administration, called it a moratorium on enforcing the nation's environmental laws and an abdication of EPA’s duty.

“This EPA statement is essentially a nationwide waiver of environmental rules for the indefinite future. It tells companies across the country that they will not face enforcement even if they emit unlawful air and water pollution in violation of environmental laws, so long as they claim that those failures are in some way 'caused' by the virus pandemic. And it allows them an out on monitoring too, so we may never know how bad the violating pollution was,” she wrote in a statement to The Hill.

So if the virus doesn't get us, the pollution will.

I would think the virus would thrive more in a dirty environment.
Trump: Er hat eine größere Ente als ich.

I dunno. Pouring a few hundred gallons of Plutonium in the water supply might kill the virus off.
Honorary Commander, 699th Airborne Assault Dachshund Regiment
Deadly Sausage Dogs from the Sky
Top 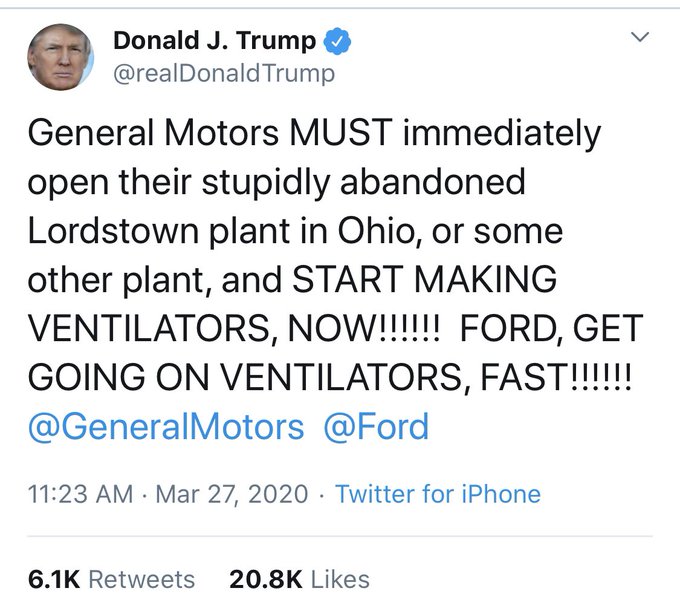 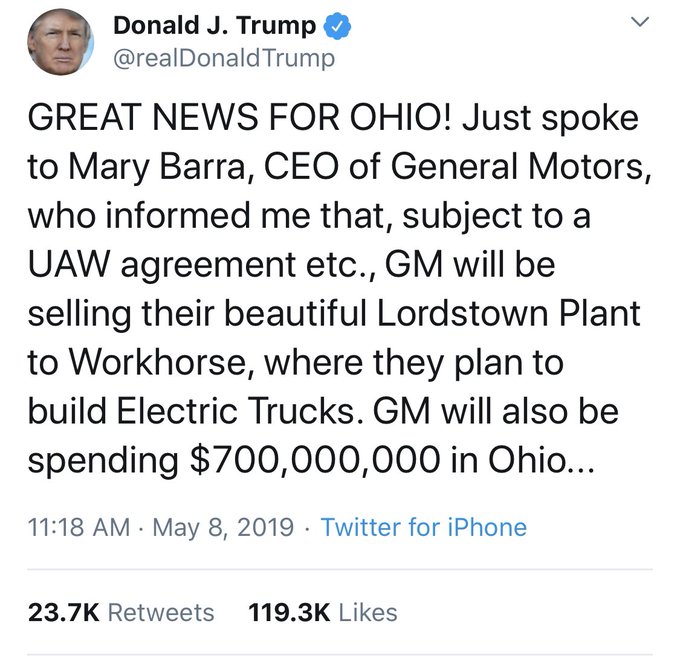 CNN wrote:Gov. Andrew Cuomo (D-NY) responds to a tweet by President Trump in which he claims that there are thousands of federal government ventilators found in a New York storage facility.

Explanation: "Trump seriously uninformed" - ventilators are in city stockpile for callout by hospitals over the next three weeks when the number skyrockets.
Top

He did promise "America First."

I think I'm tired of all the winning now.
Top


He did promise "America First."

Oh the Trumpers are losing their f-in minds in the responses.
I'm loving it!

Trump said negotiations with General Motors had been productive, “but our fight against the virus is too urgent to allow the give-and-take of the contracting process to continue to run its normal course.”

Trump said “GM was wasting time” and said his actions will help ensure the quick production of ventilators that will save American lives.

Experts say the U.S. is hundreds of thousands of breathing machines short of what it likely will need to treat a rapidly rising number of COVID-19 patients. New York, Michigan, Louisiana and the state of Washington have been singled out as virus hot spots in the U.S.

Will GM challenge in court? Want to see the text of that order.

I'm reading that he did that an hour after GM committed to doing it anyway. And Stock Prices went off a cliff when he did it
The difference between the Middle Ages, and the Age of the Internet, is that in the Middle Ages no-one thought the Earth was flat.
Top

Not a Democrat in the room.
"To argue with a person who has renounced the use of reason is like administering medicine to the dead." -- Thomas Paine
Top

Heard at my home about 40 times/day "WHAT A FUCKING IDIOT!"

No, not me talking to myself.

And it's not even directed towards me!

Mind you, I have the tee vee off during daylight hours.
I love the poorly educated!!!