Published on Aug 3, 2016
Denis Leary and James Corden dress up as Bill and Hillary Clinton and modify the words of Denis' classic song "***hole" to pay homage to Donald Trump's presidential campaign.

I just glanced at MSNBC and people were standing up holding pocket copies of the Constitution at Trump's rally in Maine. (No they weren't holding up the Skousen version.)

Reality Check wrote:I just glanced at MSNBC and people were standing up holding pocket copies of the Constitution at Trump's rally in Maine. (No they weren't holding up the Skousen version.)

Were they booed and thrown out? Were they protesters or supporters of Trump?

Protestors. I think they were being escorted out.

Holding republicans accountable for the history books. They are missing A LOT of names. I just submitted my GA Congresscritter's name:

Their title: D-list actor, Convicted felon, Senator, Representative (helpful to include committees they chair, boards they sit on, etc.); and

Link to an article or video that shows their endorsement/support (they include http:// so delete it in your copy before/after pasting).

Reality Check wrote:I just glanced at MSNBC and people were standing up holding pocket copies of the Constitution at Trump's rally in Maine. (No they weren't holding up the Skousen version.)

Were they booed and thrown out? Were they protesters or supporters of Trump?

They're only there to worship their god emperor.

Hm. Three "theres" in on sentence. Haven't done that in a while.

In the Trump era anything is true if enough people believe it.

There, there now, Skippy.

Thanks Karen! Added Orly, she should be prominent there


Karen Walker wrote:Holding republicans accountable for the history books. They are missing A LOT of names. I just submitted my GA Congresscritter's name:

Their title: D-list actor, Convicted felon, Senator, Representative (helpful to include committees they chair, boards they sit on, etc.); and

Link to an article or video that shows their endorsement/support (they include http:// so delete it in your copy before/after pasting).

Petitioning Clinical Psychologists and 1 other
#DiagnoseTrump

I tried to add Roger Stone, occupation: professional libelist, but it wouldn't accept any of my URL citations.

Trump's still pushing that sooper sekrit video of Iranians offloading sooper sekrit ransom money.
tweet 2.png
You do not have the required permissions to view the files attached to this post.

There's no way back
from there to here

Anybody else think Preibus has finally started putting Bailey's in his cereal?

Looks who's on change.org

Stern, be sure you have the http:// off because it has it already, I did that. Roger's now submitted, used link http://www.slate.com/blogs/the_slatest/ ... oteur.html

No publicly available video matches what Trump described. This raises the possibility that Trump was either fabricating the contents of a non-existent video, or he was disclosing information to which he has newly been granted access.

If this is the “top secret” Iran video that Trump claims to have seen, it would mean that Trump told his audience a half-dozen things about the tape that aren’t accurate. Contrary to what Trump said about the video he claimed to have seen, this video was not shot in Iran, it did not show the exchange of cash, it was not “top secret,” it was not “a military tape,” and it was not “provided by Iran.” Nor was it released to “embarrass the United States,” as Trump repeatedly claimed.
http://m.huffpost.com/us/entry/us_57a26 ... 14d1f370b9

So another big fat yuuuge lie that Cheeto Jesus supporters will continue to spread as gospel.

what pills do they feed the Drumpf for breakfast

Adrianinflorida wrote:Trump and Scott will tackle the immigration problem that has caused the Zika outbreak in Florida. They will build a 50 foot tall mosquito neton the Florida border with brown countries. It will be a beautiful net, it'll be 75 feet tall, and keep those Hispanic mosquitoes out of Florida. In fact, the 125 foot tall net will be the best bet ever, and the hispanic mosquitoes will pay for the net.

I heard the mosquitoes are not willing to pay

I kind of wonder if the Russian oligarchs have Trump's nuts in a vice and are making him run.

He's doing everything he can to sabotage their plan, but nothing's working.

Here is Supah Trump supporter, Paul Nehlen aka Paul Ryan's primary opponent with a smorgasboard of all teh scary Mooselamb talking points.

Starts around 2min in & really kicks it up a notch around 7min when he says we should deport all Muslims even if they are Americans. Constahtooshun Shmonstahtooshun

Princess foofypants wrote:If you want to see what true Trump believers believe (and have the beejesus scared out of you at the same time), check out Dr. Kate's place. Those lunatics truly believe that God has anointed Trump to be President.

Dr. kHate has always drawn some of the whackiest followers in the biz. It's been a while since I've read any bile from the pen of 'no-nonsense-nancy'. The last I read of her she was complaining about how her family had stopped speaking with her. Or sumpin'.

And the irony? Dr. Kate was a full-blown PUMA who HATED the fact that Clinton didn't get the nomination in 2008, which is why she went birther.n Same with No-Nonsense-Nancy.

This is what eight years of insane hatred, racism, and failure will do to someone.

FYI this is the guy who created the website.

I wonder how long it takes for submissions to show up.
You do not have the required permissions to view the files attached to this post.

In the Trump era anything is true if enough people believe it.

Seth Klarman, president and CEO of The Baupost Group, told Reuters in a statement that he found recent comments from Donald Trump “shockingly unacceptable,” specifically those in which the Republican nominee suggested that the general election will be “rigged.” Klarman called that comment from Trump “particularly dangerous.”

“I will continue to find ways to support Hillary Clinton and defeat Donald Trump,” said Klarman, who donated $5,400 to the former secretary of state’s campaign in June.

Klarman is registered as an independent voter and has given money to candidates from both parties in the past. According to filings reviewed by Reuters, the hedge fund manager previously donated money to Clinton’s previous presidential campaign, as well as to Democratic Sens. Cory Booker and Mark Warner. But he has also donated to Republican campaigns, including those of Sen. John McCain and former New York Mayor Rudy Giuliani.

"He is completely unqualified for the highest office in the land,” Klarman said in his statement to Reuters.
<BIG SNIP>

A Trump supporter in Maine says we shouldn't pick on Melania because.....

I am not "someone upthread".
Trump needs to be smashed into some kind of inedible orange pâté.

Let's not forget these interns.

Great meeting all of you. This group knocked on 50K doors & counting here in Maine, thank you! @MaineGOP 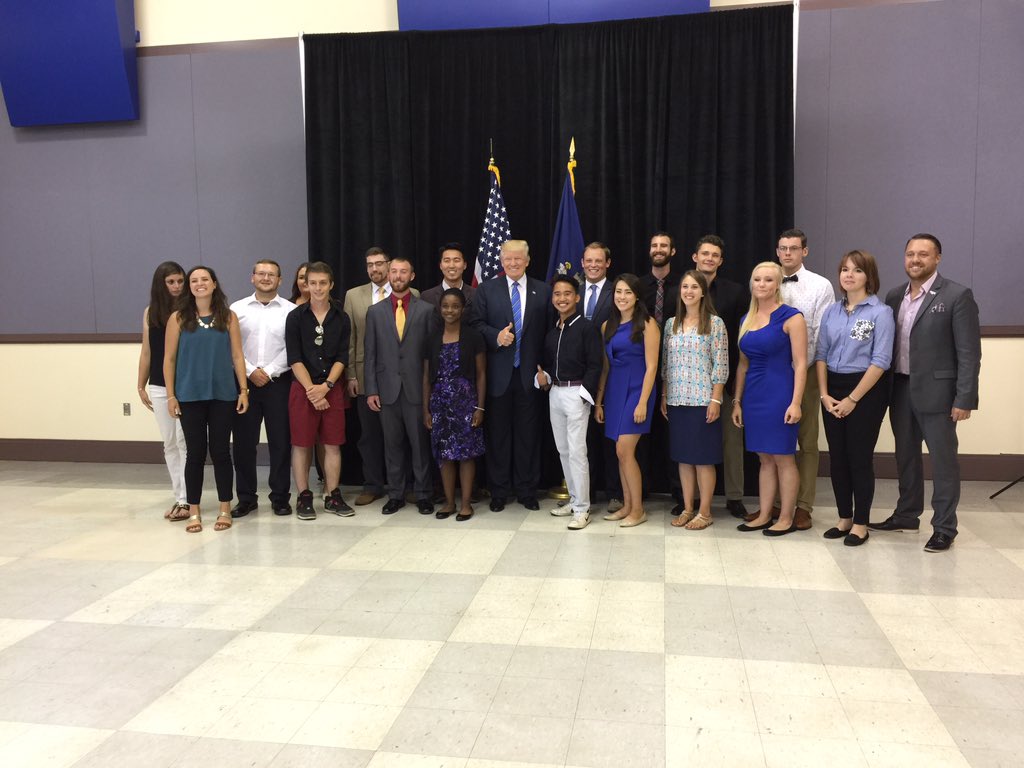 Two shows tomorrow! Two tickets per sucker limit per mobile number that will be sold in perpetuity.

I don't believe he's looking forward to it. It's a five show weekend, that's a lot just on Broadway let alone the travel. And he is 70 and the whole show, if he was Billy Flynn in CHICAGO it would be much easier to him (Fran and Barry Weissler should offer). Clinton campaign even paused advertising in VA and NC (he hasn't spent there at all).

Did Paul Ryan just predict that Clinton will win in a landslide?
By Jenna Johnson and Karen Tumulty August 4 at 8:01 PM

House Speaker Paul D. Ryan (R-Wis.) sent an urgent fundraising appeal on Thursday evening that warned: “If we fail to protect our majority in Congress, we could be handing President Hillary Clinton a blank check.” Whether or not it was intentional, the phrase “blank check” has a political echo — one that suggests a deep fear by congressional Republicans that a sinking presidential candidate could take their majorities in the House and Senate with him, and that they are getting ready to desert him.

It goes back 20 years, to an infamous chapter in internecine Republican politics. In the weeks before the 1996 presidential election, as it became clearer and clearer the GOP nominee Bob Dole would not defeat incumbent president Bill Clinton, Republican operatives began urging their struggling congressional candidates to begin making the argument: “Let’s not give Clinton a blank check.”

***
For Dole, the implication that even his own party had given up on him was a devastating blow. One of Dole’s top strategists that year was Paul Manafort, who is now Trump’s campaign chairman. Dole’s personal assistant was Michael Glassner, who has worked for Trump’s campaign for more than a year. A number of other Dole staffers now work for Trump.
***
When asked if there would ever be a point at which he would abandon Trump, Ryan said of his endorsement: “None of these things are ever blank checks.” It was the stand-out line of the interview and appeared in numerous headlines. Hours later, the words popped up twice in Ryan’s fundraising appeal that was sent to email addresses collected during Wisconsin Gov. Scott Walker’s failed presidential campaign.