Park models are very popular in Florida, especially for a large number of snow birds that don't want to invest in a large home with all the upkeep that has to be done during the summer - mowing lawns and such.
"I know that human being and fish can coexist peacefully"
--- George W Bush

RVInit wrote: ↑
Wed Jan 02, 2019 4:24 am
Park models are very popular in Florida, especially for a large number of snow birds that don't want to invest in a large home with all the upkeep that has to be done during the summer - mowing lawns and such.

I need a bit more insulation for Maine.
"[Moderate] doesn't mean you don't have views. It just means your views aren't predictable ideologically one way or the other, and you're trying to follow the facts where they lead and reach your own conclusions."
-- Sen. King (I-ME)
Top

Darn. Why couldn't they do this when I was in New York and could go watch.

@nytimes
53m53 minutes ago
More
Instead of painstakingly dismantling the old Tappan Zee Bridge, a 6,500-ton chunk will be demolished by explosives Jan. 12

The Conversation: Tiny houses look marvellous but have a dark side: Three things they don't tell you on marketing blurb

I live in a tiny house. It's called an "apartment."

I'm not sure I follow the charm of buying a tiny house until you can buy a big house. Why not just rent an apartment?

(Not saying I don't see the charm of tiny houses for various reasons, but for the sake of ownership seems odd to me.)
Top

@nytimes
53m53 minutes ago
More
Instead of painstakingly dismantling the old Tappan Zee Bridge, a 6,500-ton chunk will be demolished by explosives Jan. 12

We drove over that once. I read that the explosion was delayed because bad weather slowed down the preparations.
"To argue with a person who has renounced the use of reason is like administering medicine to the dead." -- Thomas Paine
Top

Bureaucrats can be so insensitive to the interests of taxpayers! They should announce implosions well in advance and nationwide as tourist attractions.
A 19th Amendment Centennial Moment:
The 19th Amendment was first introduced to Congress in 1878, yet it was not approved by Congress until 1919 – 41 years later.
- https://legaldictionary.net/19th-amendment/
Top

The Dutch city of Eindhoven is to be the first in the world to have habitable homes made by a 3D printer, in an innovation its backers believe will revolutionise the construction industry.

Of the first five new houses to be put on the rental market next year, the smallest, with two bedrooms, has already attracted applications from 20 interested families just a week after images were made available.

Known as Project Milestone, the development is said by the Dutch construction company Van Wijnen to offer a solution to a shortage of skilled bricklayers in the Netherlands.

The method will also cut costs and environmental damage by reducing the amount of cement that is used, said Rudy van Gurp, a manager at the firm, which is working in collaboration on the project with the Eindhoven University of Technology.

The 3D printer being used is essentially a huge robotic arm with a nozzle that squirts out a specially formulated cement, said to have the texture of whipped cream.


A Grand Plan to Clean the Great Pacific Garbage Patch

Can a controversial young entrepreneur rid the ocean of plastic trash?


In May, 2017, a twenty-two-year-old Dutch entrepreneur named Boyan Slat unveiled a contraption that he believed would rid the oceans of plastic. In a former factory in Utrecht, a crowd of twelve hundred people stood before a raised stage. The setting was futuristic and hip. A round screen set in the stage floor displayed 3-D images of Earth; behind Slat, another screen charted the rapid accumulation of plastic in the Pacific Ocean since the nineteen-fifties. Slat is pale and slight, and has long brown hair that resembles Patti Smith’s in the “Horses” era. He was dressed in a gray blazer, a black button-down, black slacks, and skateboarding sneakers, which he wears every day, although he doesn’t skateboard. Onstage, he presented plastic artifacts that he had collected from the Pacific during a research expedition: the back panel of a Gameboy from 1995, a hard hat from 1989, a bottle crate from 1977. “This thing is forty years old,” he said in Dutch-inflected English. “1977 was the year that Elvis Presley left the building for good, presumably.” The audience laughed. Slat then held up a clear plastic dish, filled with shards of plastic. “The contents of this dish are the actual stomach contents of a single sea turtle that was found dead in Uruguay last year,” he said. A picture of the dead turtle flashed on a screen behind him.

Then Slat made his pitch. In the next twelve months, he and a staff of engineers at the Ocean Cleanup, an organization he founded in 2013, would build the system they had designed, assemble it in a yard on San Francisco Bay, then set sail with it, travelling under the Golden Gate Bridge and out into the Pacific. Slat’s destination was the Great Pacific Garbage Patch, midway between California and Hawaii, an area within what is known as the North Pacific Subtropical Convergence Zone. The patch is not, as is often believed, a solid island of trash but a gyre, twice the size of Texas, where winds and currents draw diffuse floating debris onto a vast carrousel that never stops.

There are four other ocean gyres in the world, but scientists believe that the one in the North Pacific contains the most trash—nearly two trillion pieces of plastic, weighing nearly eighty thousand metric tons, according to a study that scientists working with the Ocean Cleanup published in the online journal Scientific Reports last March. The study found that ninety-two per cent of the pieces are large fragments and objects: toothbrushes, bottles, umbrella handles, toy guns, jerricans, laundry baskets. Most problematic, and accounting for half of the plastic mass in the gyre, are what sailors call ghost nets: great tangles of mile-long discarded fishing nets weighing as much as two tons, which can ensnare animals such as seals and sea turtles. Attempting to fish out this drifting morass of trash using conventional methods—vessels, more nets—would be a Sisyphean task.

Slat became famous for a TEDx talk that he gave in 2012, in which he expounded on an idea that he had after a scuba-diving trip in Greece during high school. Instead of trying to catch ocean plastic, he thought, perhaps we could let the plastic come to us. “The oceanic currents moving around is not an obstacle—it’s a solution,” he told the audience. Slat, eighteen years old at the time, had entered an aerospace-engineering program at the Delft University of Technology and then, in keeping with the Silicon Valley archetype, dropped out before his second semester. But he had a big, vivid idea, a sweetly tremulous voice, and a goofy sense of humor. (His Twitter bio reads, “Studied aerospace engineering, becomes a cleaner.”) The video went viral, and Slat soon crowdfunded two million dollars from donors in a hundred and sixty countries. The United Nations Environment Programme named him a 2014 Champion of the Earth, noting his “keen mind” and “the lack of fear that marks out visionaries.” The jury for the world’s largest prize for design, the Danish INDEX: Award, granted him a hundred thousand euros, stating that his “incredibly ingenious idea will greatly improve the condition of the Earth’s greatest natural resource, as well as the lives of millions.” To date, Slat has hired eighty employees and raised some forty million dollars from donors online, charitable foundations, the Dutch government, a few anonymous Europeans, and Silicon Valley billionaires like Peter Thiel and Marc Benioff. After many iterations and scale-model tests of his invention, he and his team settled on a design.

The mechanism that Slat revealed in Utrecht was surprisingly simple: a two-thousand-foot floating plastic boom, attached to a geotextile skirt that would extend about ten feet beneath the ocean’s surface. The boom and the skirt would together create an artificial coastline that would accumulate flotsam riding the gyre’s currents, eventually forming a sort of shoreline of concentrated trash. Onstage, Slat gave a signal, and a black curtain behind him fell from the ceiling to reveal four monumental anchors. These were, Slat said, key to the concept. They would hang hundreds of metres deep, where the currents are much slower than at the top, insuring that the system moved more slowly than the trash, rather than just drifting around with it.

In tests, it killed 99.9999 percent of the bacteria in contaminated water

An abandoned airport terminal at New York’s John F. Kennedy International Airport has been reborn as the TWA Hotel, a stylish stay channeling the jet age. While the once-groundbreaking Trans World Airlines ceased operations in 2001, and the terminal closed in October of that year, the luxe hotel pays homage to the original architecture of the 1962 building designed by architect Eero Saarinen. ... 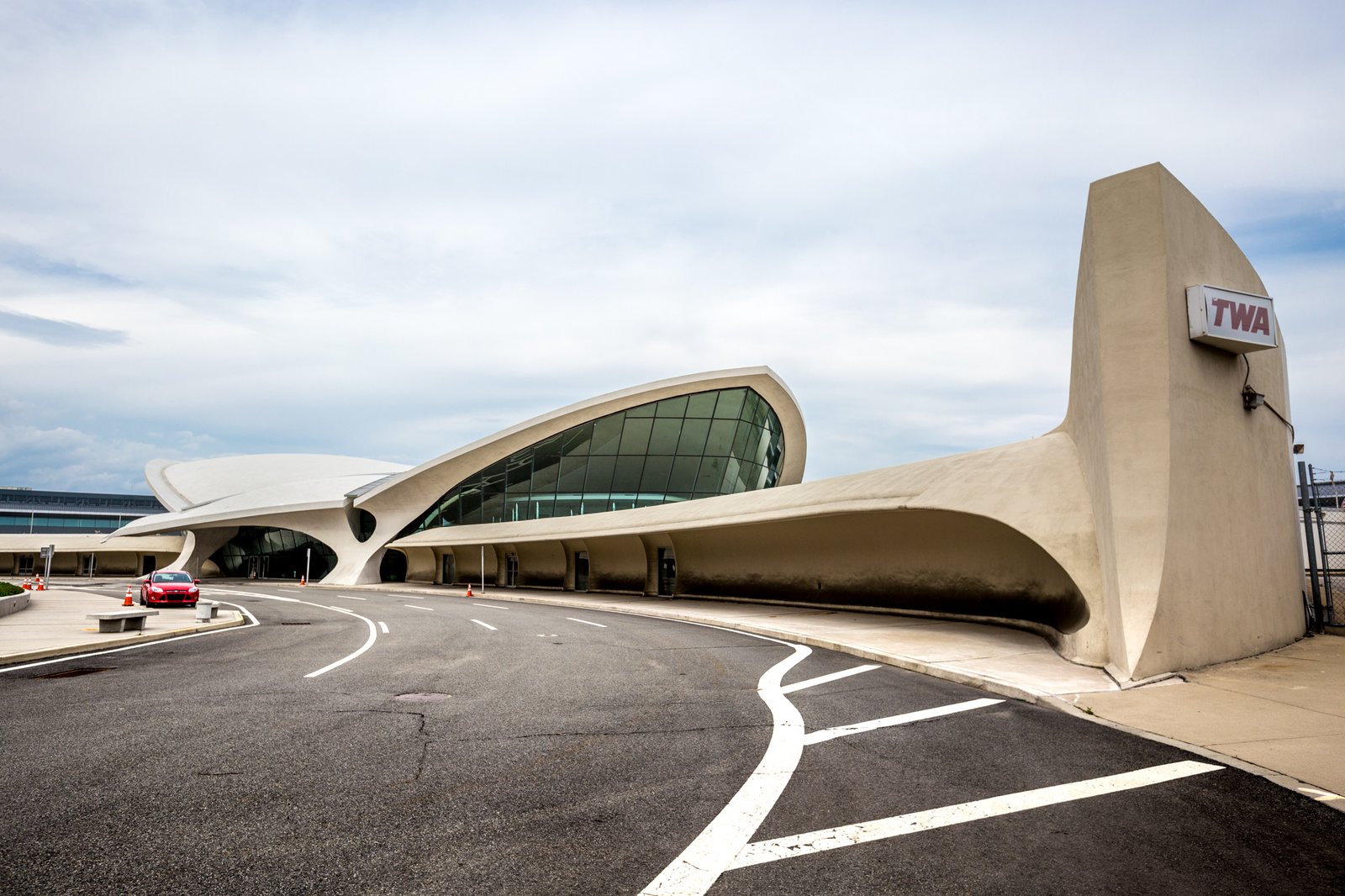 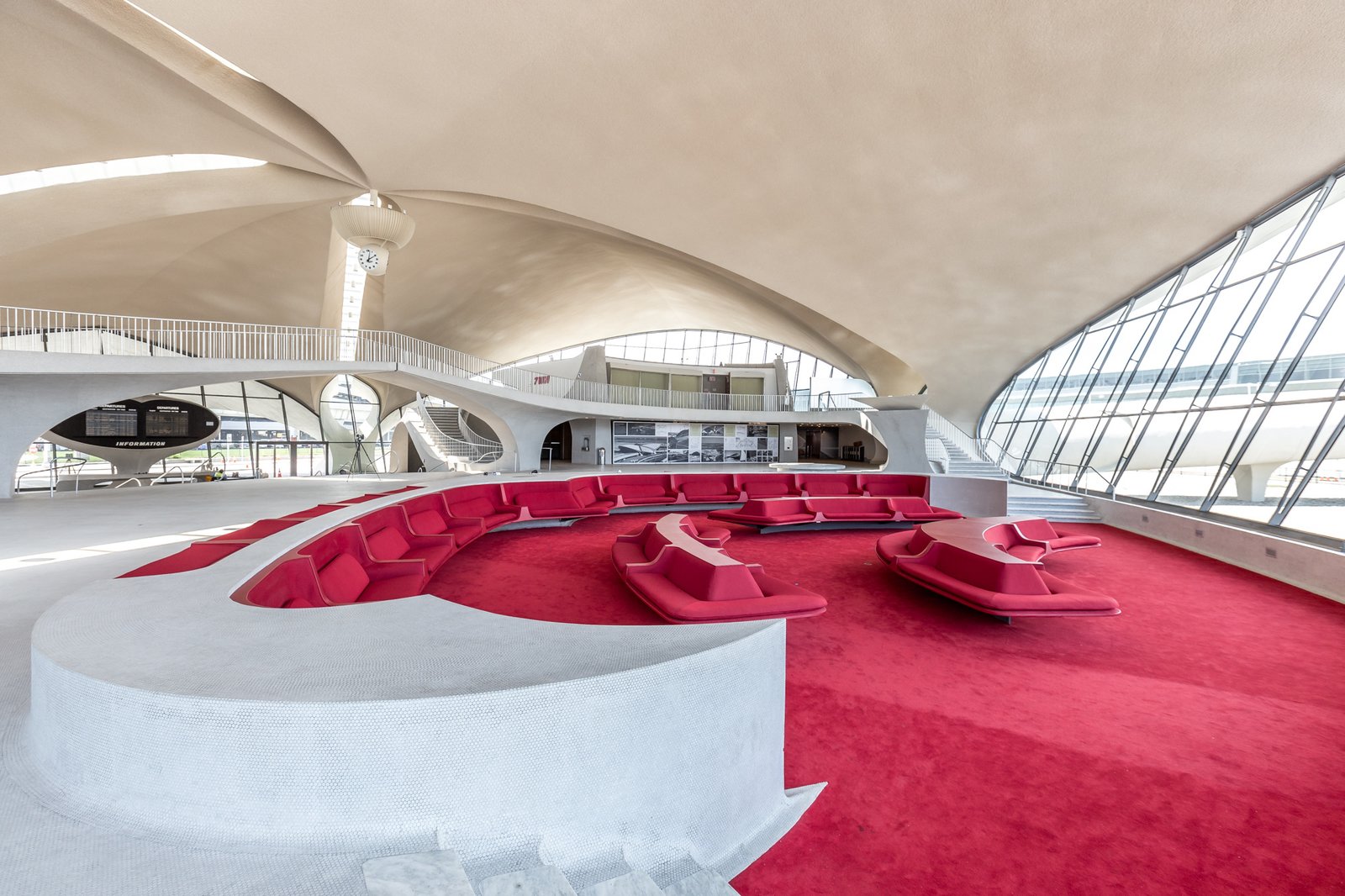 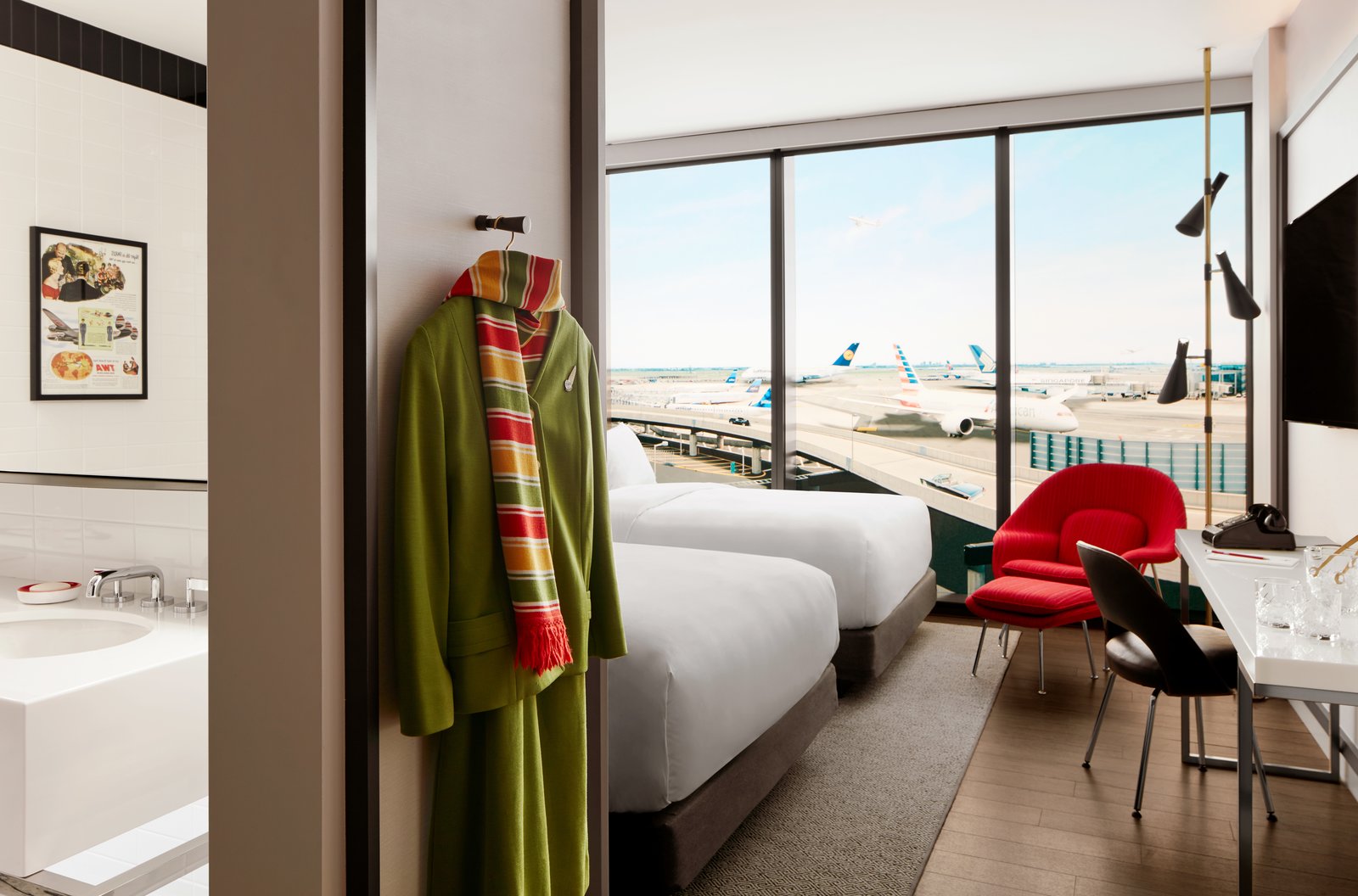 No need to worry about jet engine noise, as the floor-to-ceiling windows are built with Fabrica glass—and they're the second-thickest windows in the world, following those of the U.S. Embassy in London. A fully stocked, in-room wet bar holds Moët & Chandon Imperial Brut Champagne, Hennessy V.S.O.P Privilège Cognac, and ingredients for making the official 007 Belvedere martini for when you get thirsty. 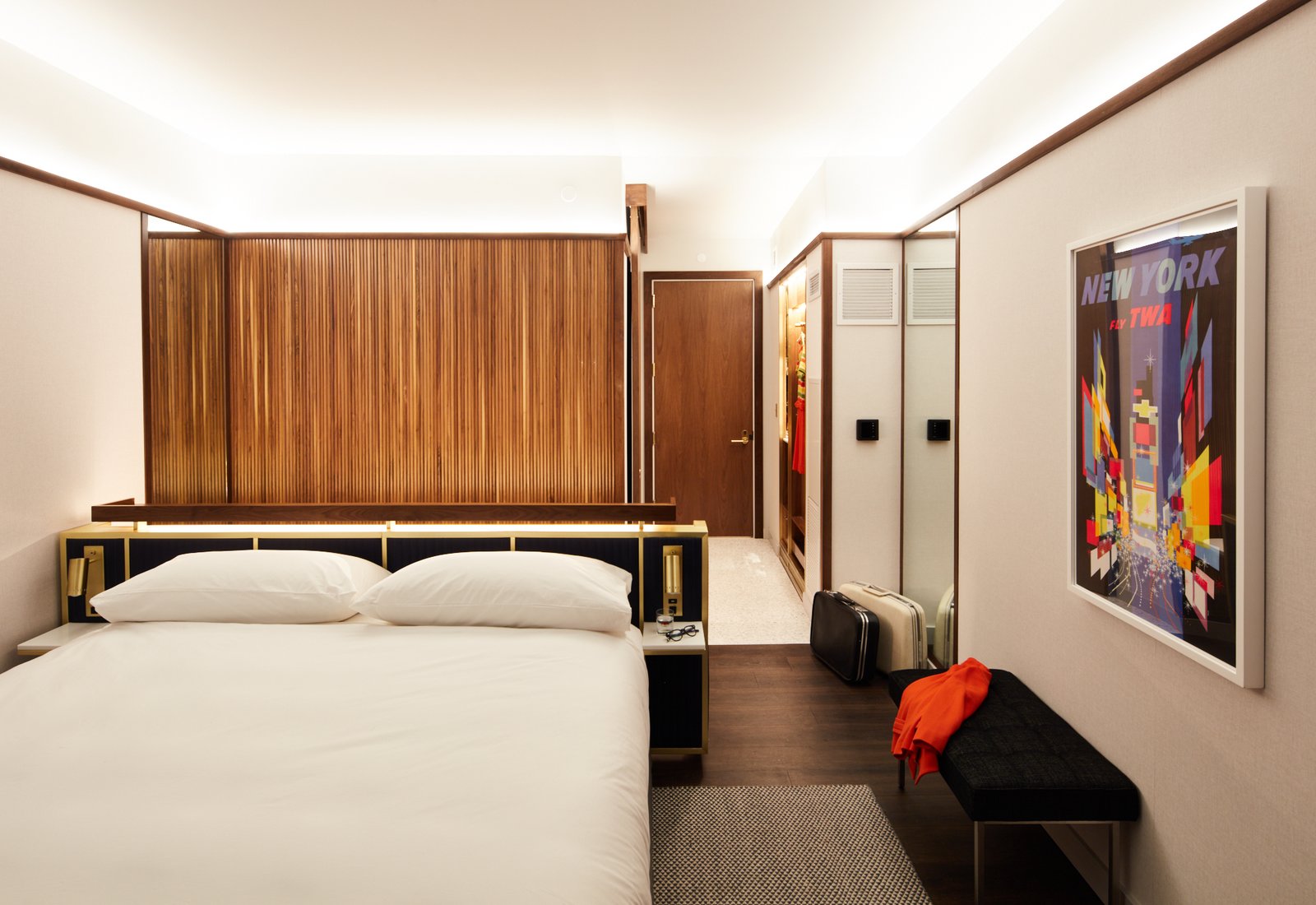 
A $6 million floating home that can withstand Category 4 hurricanes is now a reality. Take a look inside. 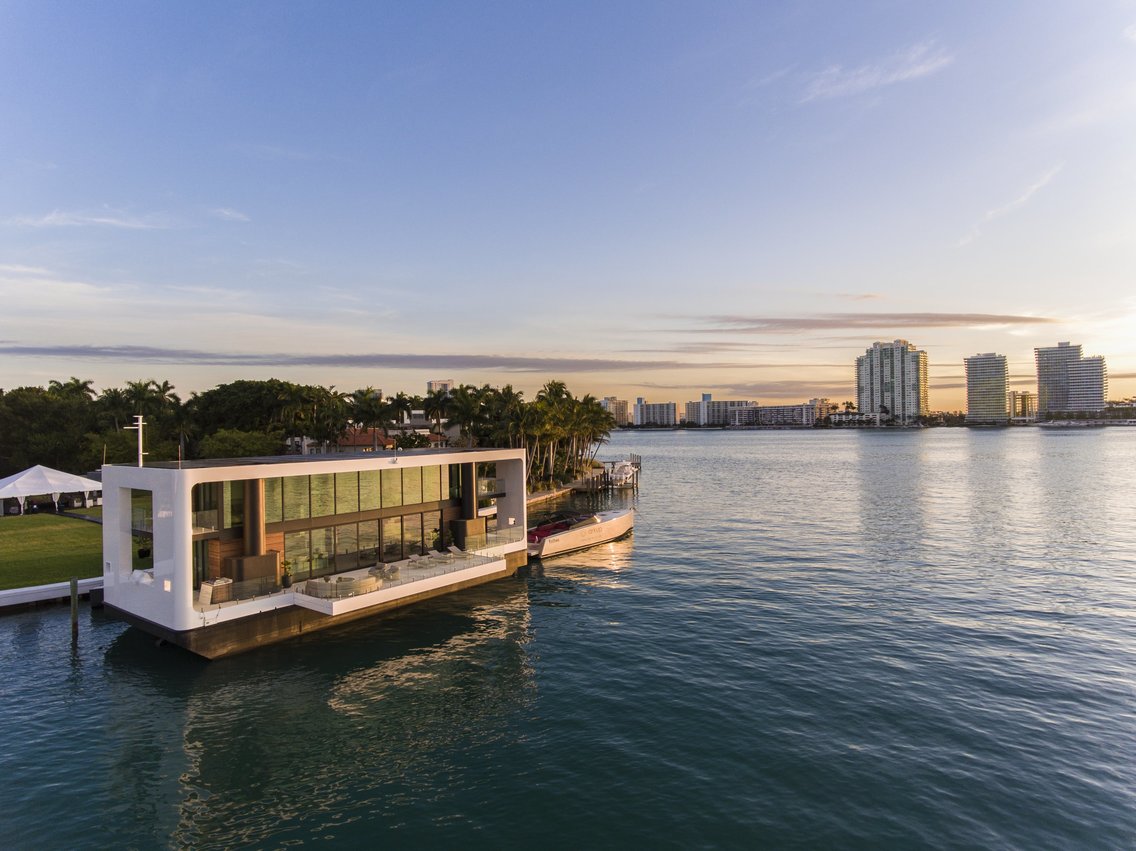 After years of development, the housing startup Arkup has debuted a floating home that can withstand rising sea levels and Category 4 hurricanes.

The home contains a hydraulic system that lifts it above water and anchors it during heavy winds.

Arkup envisions a future where entire communities in Miami and other major cities are designed to float. 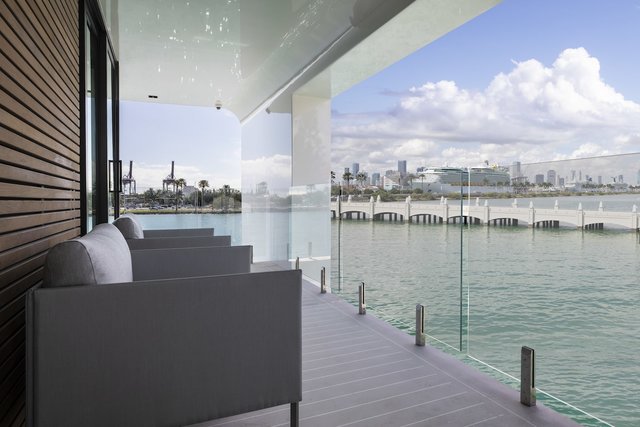 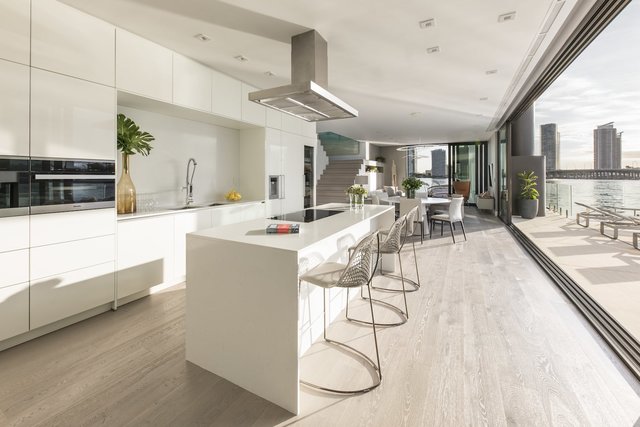 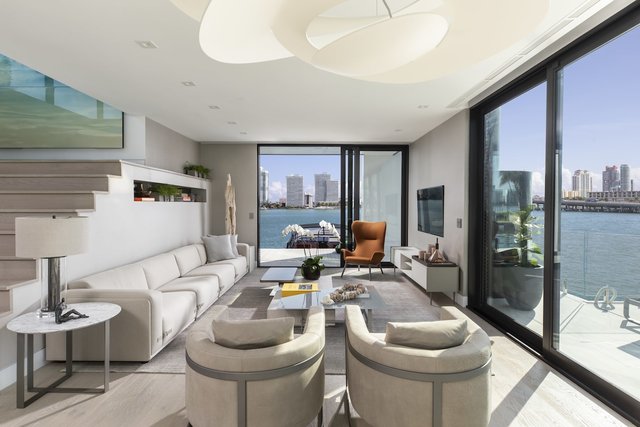 Too much glass. You'd broil inside there with the summer sun beating in. Withstand a 30 foot tidal wave? I doubt it. If a CAT 4 hurricane were heading my way I'd be beat feet the opposite way.
Trump: Er hat eine größere Ente als ich.

Yeah, umm ... hurricanes go up to Category 5.
In my defense, I was left unsupervised.
Top

ZekeB wrote: ↑
Wed Mar 06, 2019 6:08 am
Too much glass. You'd broil inside there with the summer sun beating in. Withstand a 30 foot tidal wave? I doubt it. If a CAT 4 hurricane were heading my way I'd be beat feet the opposite way.

The glass bothered me too.
A 19th Amendment Centennial Moment:
The 19th Amendment was first introduced to Congress in 1878, yet it was not approved by Congress until 1919 – 41 years later.
- https://legaldictionary.net/19th-amendment/
Top

ZekeB wrote: ↑
Wed Mar 06, 2019 6:08 am
Too much glass. You'd broil inside there with the summer sun beating in. Withstand a 30 foot tidal wave? I doubt it. If a CAT 4 hurricane were heading my way I'd be beat feet the opposite way.

The glass bothered me too.

Some glass is really strong.

That said, I too am skeptical of the claimed hurricane resistance of this structure.
The bitterest truth is healthier than the sweetest lie.

Not innovative, but I just had to post this.

I've seen that before, but I can't remember where it is. Link?
"To argue with a person who has renounced the use of reason is like administering medicine to the dead." -- Thomas Paine
Top

I initially came across it on Facebook. It's known as the Chicken Church and is in Madeira Beach, FL.

The BL - (See Video): Woman lives in oldest mall in America after 48 abandoned shops are turned into homes