I forgot. Are there crocodiles or alligators in your moat?
A 19th Amendment Centennial Moment:
The 19th Amendment was first introduced to Congress in 1878, yet it was not approved by Congress until 1919 – 41 years later.
- https://legaldictionary.net/19th-amendment/
Top

I would recommend piranha....
Gazer Into the SovCit Abyss
Top

We just made our second dash for the basement this spring already. I had been talking to my dad on the phone (he lives east of St. Louis, we live south of Indy) and said they'd had heavy weather pass north of them earlier. I remember commenting that it was perfectly still outside here. Just after I got off the phone I saw lightning to the northeast of us. Almost immediately after that my phone went off with a tornado warning and to "take shelter now". I sent my SIL to the basement with the dogs and ran upstairs to get my wife (who has been very sick and was in bed). By the time we got downstairs it was already here. The power flickered on and off and the cover on the basement egress window was banging around like it was going to come off. The whole thing passed in about 15 minutes but I have to admit that I was a little rattled.

There couldn't have been more than 90 seconds from when I saw that first flash of lightning to the time I got downstairs with my wife and it was already on top of us. I grew up in the Midwest and lived here most of my life so I know the drill but I honestly don't remember a storm ever coming up this fast. Anyway, the worst is past us now and I took a quick look around outside and I don't think we have any damage but I'll take a closer look in the morning.

There are a lot of days when I miss that mild, cloudy Seattle weather. At least the weather there rarely tried to kill you.
If Trump was a stopped clock he still wouldn't be right twice a day.
Top

We had a few really rough hours of storms here last night starting around 1:30 AM. Weird wind noise, lots of thunder and lightning. There was a tornado, but not all that close to us. Tornadoes are not all that common here. They can happen, but don't very often. It was a really nasty storm.

I'm glad you are okay, Shizzle Popped. That sounds terrifying!
"To argue with a person who has renounced the use of reason is like administering medicine to the dead." -- Thomas Paine
Top

You know, it's funny because I've been sitting here thinking about it. It's not like I haven't been through the whole tornado warning thing a hundred times before. Spending a little unscheduled time in the basement is just part of life in the Midwest but if this had been the real deal I'm not sure we would have made it to the basement in time. And if it hadn't been for the alert on the smartphone going off we wouldn't have stood a chance.
If Trump was a stopped clock he still wouldn't be right twice a day.
Top

I watched a program on the Discovery Channel yesterday about the 100 best gadgets ever invented. Smart phones came in Number 1! I do not disagree. (In fact, that was my guess.)
"To argue with a person who has renounced the use of reason is like administering medicine to the dead." -- Thomas Paine
Top

Smart Phones? You mean you no longer use 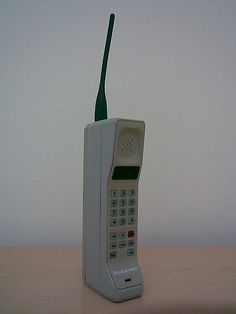 I remember when we used that very same model at a place where I worked. It was a tool of the devil.
Trump: Er hat eine größere Ente als ich.

Those were the top technology of their day.

Prior to cell phones, mobile phones were somewhat uncommon, and portable phones were chicken teeth. The few that were available were best described as "luggable" - literally an attache case with a pile of batteries inside. Anyone that could carry one of these for a couple blocks would be the envy of body builders everywhere. They didn't work all that well, and they were prone to failure. Excellent door stops and boat anchors. Terrible phones.
Top

Yes mobile phones. I use to tune in on 152 MHZ and listen in on a vet’s call to his girlfriend. If he only knew how much others could hear. The calls weren’t about Tylan 200 for hogs.
Trump: Er hat eine größere Ente als ich.

Snowed about 2” last night. (12” up at FEMA Camp 626). Plows were going all night. So this morning, a truck dumped a load of mulch in front of a brand-new snowbank. Spring in New England.

I reverently believe that the Maker who made us all makes everything in New England but the weather. I don't know who makes that, but I think it must be raw apprentices in the weather-clerk's factory who experiment and learn how, in New England, for board and clothes, and then are promoted to make weather for countries that require a good article, and will take their custom elsewhere if they don't get it.

There is a sumptuous variety about the New England weather that compels the stranger's admiration -- and regret. The weather is always doing something there; always attending strictly to business; always getting up new designs and trying them on the people to see how they will go. But it gets through more business in spring than in any other season.

In the spring I have counted one hundred and thirty-six different kinds of weather inside of four-and-twenty hours. It was I that made the fame and fortune of that man that had that marvelous collection of weather on exhibition at the Centennial, that so astounded the foreigners. He was going to travel all over the world and get specimens from all the climes. I said, "Don't you do it; you come to New England on a favorable spring day." I told him what we could do in the way of style, variety, and quantity. Well, he came and he made his collection in four days. As to variety, why, he confessed that he got hundreds of kinds of weather that he had never heard of before. And as to quantity -- well, after he had picked out and discarded all that was blemished in any way, he not only had weather enough, but weather to spare; weather to hire out; weather to sell; to deposit; weather to invest; weather to give to the poor.

The people of New England are by nature patient and forbearing, but there are some things which they will not stand. Every year they kill a lot of poets for writing about "Beautiful Spring." These are generally casual visitors, who bring their notions of spring from somewhere else, and cannot, of course, know how the natives feel about spring. And so the first thing they know the opportunity to inquire how they feel has permanently gone by.

Old Probabilities** has a mighty reputation for accurate prophecy, and thoroughly well deserves it. You take up the paper and observe how crisply and confidently he checks off what today's weather is going to be on the Pacific, down South, in the Middle States, in the Wisconsin region. See him sail along in the joy and pride of his power till he gets to New England, and then see his tail drop. He doesn't know what the weather is going to be in New England. Well, he mulls over it, and by-and-by he gets out something about like this: Probably northeast to southwest winds, varying to the southward and westward and eastward and points between, high and low barometer swapping around from place to place; probable areas of rain, snow, hail, and drought, succeeded or preceded by earthquakes, with thunder and lightning. Then he jots down his postscript from his wandering mind, to cover accidents. "But it is possible that the programme may be wholly changed in the mean time."

http://www.islandnet.com/~see/weather/arts/twain1.htm
"[Moderate] doesn't mean you don't have views. It just means your views aren't predictable ideologically one way or the other, and you're trying to follow the facts where they lead and reach your own conclusions."
-- Sen. King (I-ME)
Top

We're dead center of that red blob but a tornado on Easter isn't that unexpected around here. We lost a MASSIVE oak in the back yard about 10 years ago to an Easter tornado.
Top

When a tornado looms, do you go to church of hunker down in the basement

When a coronavirus looms, do you go to church of hunker down in the basement

Shocking footage shows significant damage done to homes in a neighborhood of Monroe, Louisiana after a suspected tornado tore through the area. https://abcn.ws/2JVwrNs

WLBT 3 On Your Side
@WLBT
·
8m
WOW! It appears Laurie Lynch got a picture of a tornado near Yazoo City. This was at Hwy 49 and Broad Lake. Submit your pics here: http://bit.ly/WLBTPics 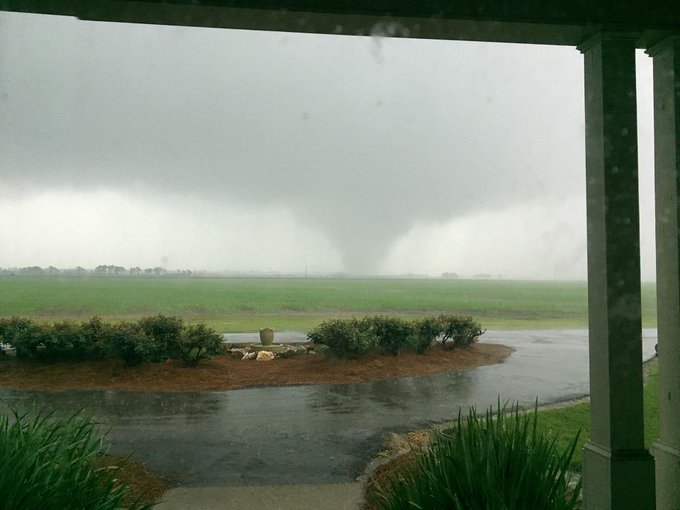 I have no idea who that guy is but it's bullshit to start saying how powerful or how wide it is just from a couple of photos of damage. We had multiple tornadoes touch down and at least 3 dead, and it was a very powerful storm, but to just jump right out and say it was a 5, and a mile wide, and worse than Joplin, MO barely hours after it hits is ridiculous.
Top
Post Reply
5678 posts