Orlylicious wrote:It is absolutely forbidden to take photos of #KimJongUn family statues from the back. Eric Lafforgue did. #Fatty3 #NorthKorea #DPRK

Well that's boring. You'd think if it was illegal to take a photo of the back of a statue it'd be for a good reason, like the statue was mooning everybody. Really, Kim dynasty, pick up your game!

When Kim's Dad died, I watched a lot of the DPRK TV coverage. The most famous anchor is named Ri Chun-hee, she's been on since 1971. She's mostly retired now so when they roll her out it's big news. Love big brassy women like Orly, Mama June, Ethel Merman, Divine, etc so Ri's been a favorite, she wears awesome apparel. Looking to see if she's on this weekend, here she was after the Hydrogen bomb test in 2016:

2012 interview package, she was planning to retire but that didn't happen.

Donald has a reality star Villian competitor. Kim's on live worldwide. CNN's covering it, a lot of journalists are posting on Twitter. No military yet. Pence arrives Sunday (why?). Reporters weren't allowed to bring their phones. Please Donald, don't treat this like Reality TV.

Guess who was rolled in? Ri Chun-hee!!! She goes nuts.

Anna Fifield @annafifield in Tokyo watching NK TV live from Tokyo. South Korea blocks all NK broadcasts so Anna's friends in Seoul were watching through her Periscope.
418,160 Tokyo bureau chief for the @WashingtonPost, focusing on Japan, and the Koreas. New Zealander

This is great, it's her Periscope event with full commentary and explanation of what's going on from a fun expert: 16 minutes in is Kim's red carpet arrival. Donald should be jealous as hell. 30 minutes in she explains over the video the personality cult and how people practiced for months for these formations. She said early on she didn't expect a weapons test because they wouldn't want to distract. They usually do it a few days in advance, or at least early in the morning so they can brag.


North Korea shows off new missiles in huge military parade, but doesn’t test nuke
By Anna Fifield and Simon Denyer April 15 at 1:44 AM

TOKYO — North Korea put on a huge military spectacle Saturday to celebrate its founder’s birthday, parading its series of new and technologically advanced missiles in front of Kim Jong Un, and in a defiant show of force in front of the world. 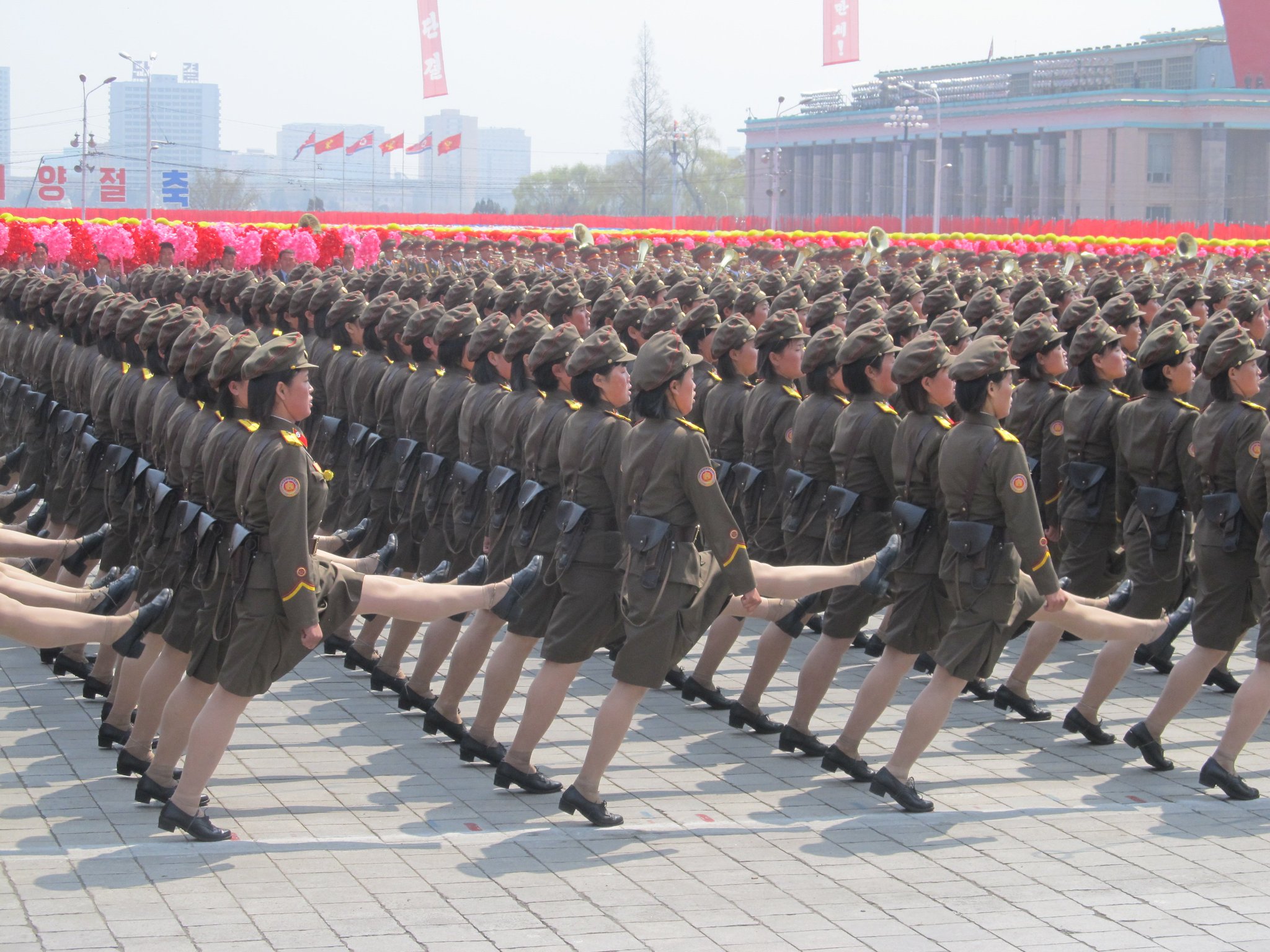 Orlylicious wrote:Donald has a reality star Villian competitor. Kim's on live worldwide. CNN's covering it, a lot of journalists are posting on Twitter. No military yet. Pence arrives Sunday (why?). Reporters weren't allowed to bring their phones. Please Donald, don't treat this like Reality TV.

Technically, The USA has been operating an active, UN sanctioned police action for 60+ years. He doesn't have to start a war, because it never ended.

North Korea and the Risks of Miscalculation
As tensions rise in East Asia, they highlight the dangers of Trump’s unpredictability.

Not long after the United States Navy dispatched a carrier strike group in the direction of the Korean peninsula following a North Korean missile test last week, Pyongyang vowed to counter “the reckless act of aggression” and hinted at “catastrophic consequences.” The remarks came amid rising tension in the region as satellite images seem to indicate that North Korea is preparing for a possible sixth nuclear test, and as U.S. President Donald Trump warns that North Korean President Kim Jong Un is “doing the wrong thing” and that “we have the best military people on earth.”

There’s nothing particularly unusual about this sort of creative, bellicose rhetoric from the North Korean regime, which routinely threatens to do things like turn Seoul into a “sea of fire” or fire “nuclear-armed missiles at the White House and the Pentagon—the sources of all evil.” North Korea needs to be taken seriously as a hostile regime in artillery range of a close U.S. ally, and potentially in missile range of another. But its leadership lobs threats so promiscuously and outlandishly that one can build in a discount factor—there’s a long track record of unrealized North Korean threats to judge by. In that context, the probability that any given one will be realized is quite small.

The regime has never much liked the annual joint U.S.-South Korea military exercises, and has made its feelings known; the exercises have tended to carry on every year without direct consequences to the personnel involved. Nor has the regime ever welcomed American aircraft carriers in its nearby waters or been shy about saying so; those, too, have come and gone unmolested.

What’s different now is Donald Trump. Whereas many of his predecessors steered sedulously clear of escalatory rhetoric, preferring to treat various North Korean leaders as recalcitrant children at worst or distasteful but nevertheless semi-rational negotiating partners at best, Trump has threatened North Korea via Twitter, declaring that the regime is “looking for trouble.” As my colleague Uri Friedman pointed out Thursday, three successive presidents prior to Trump, since the Clinton administration considered military action against the North’s then-nascent nuclear program, have opted for trying negotiations rather than risk a strike. It’s apparent that none succeeded in halting the nuclear program’s progress. But it’s equally apparent that the kind of massive conflagration on the Korean peninsula that world leaders are now warning against has been avoided since 1953.

North Korea tried to launch a missile today, but it failed. I hope 45 is smart enough to keep his mouth and twitter shut.


North Korea has attempted to launch a missile from an eastern coastal city, but the launch appeared to end in failure, according to South Korea.

"To argue with a person who has renounced the use of reason is like administering medicine to the dead." -- Thomas Paine

I'm waiting for the mocking tweet of Trump laughing and pointing.

How many North Koreans will be punished for that failure?

I wonder how many of those "Military" are civilians that are told to put on a uniform and march when ceremonies demand it.

Suranis wrote:I wonder how many of those "Military" are civilians that are told to put on a uniform and march when ceremonies demand it.

Well, I agree that the North Koreans do create what the Soviet Union referred to as Potemkin Villages. That is, things that are only meant to be seen and not used. But my guess is that if anything is such a thing it would be the missiles on display. With conscription, soldiers (in comparison) are relatively cheap and easy to produce.

Easy to confirm when you know you played the remote controls

The ceremony, with rockets about the 1hr40mins marker

ETA. original posting not vailable, replaced by a 2hrs video from a Thai user account

True enough that NK has trouble working up a missile with a nuclear warhead also capable of considerable distance and accuracy; a multiple-achievement of great complexity.

But I was one of the earliest writers to talk about the "suitcase bomb". Easy enough to smuggle the parts into the US, just like smuggling heroin, assemble the bomb near its target, and set it to go off with a timer or a remote signal (such as cellphone or laptop device). Not as destructive as an aerial blast but stashing it in the upper floor of a skyscraper (it would be smaller than a refrigerator, especially since it doesn't need any guidance systems) would approach that effect. Once in place it couldn't be found except with a crowbar, and it wouldn't give as much as half-a-second warning.

Fortinbras, I agree that a suitcase nuke is a concern. A lot depends though on how advanced the North Koreans are in terms of warhead design. The first nuclear weapons were crude, heavy devices which wouldn't make an ideal weapon to smuggle in. The other thing is that in terms of deterrence a suitcase nuke is useless. Every day it isn't used is a day that someone could stumble on it or at least a crucial piece of it or the people who would detonate it, etc.

It wouldn't surprise me if the North Koreans had at least considered that plan as their Samson in the Temple response to a regime decapitation, but that's just one of their many unpleasant options.

I wonder if Trump offered China Taiwan in exchange for North Korea.

No, but he offered North Korea Seth Rogen and James Franco in exchange for all their nukes.

Nah, poots hate governmental authority. So they should really move to Somalia.

Nah, poots hate governmental authority. So they should really move to Somalia.

North Korea fits the horror stories that the birthers and poots concocted about the US under the Obama communist-fascist atheistic-islamist regime. They could live their fantasy.

Somalia wouldn't do for them. The poots don't like being told to obey the law and pay their taxes but they sure do like government hand-outs and free stuff.

And don't forget services, like (safe)running water, electricity, and internet, and protection from the real bad guys.

The fact that you sincerely and wholeheartedly believe that the “Law of Gravity” is unconstitutional and a violation of your sovereign rights, does not absolve you of adherence to it.

from a couple of days ago


Trump Is Willing to Consider a Sudden Strike on North Korea

In the wake of North Korea’s failed medium-range missile test this weekend, President Donald Trump is willing to consider ordering “kinetic” military action, including a sudden strike, to counteract North Korea’s destabilizing actions in the region, said a person familiar with the White House’s thinking.

But Trump’s very strong preference is for China to take the lead on dealing with North Korea, said the person, who asked not to be named because the discussions are private.

Trump’s strategy isn’t exactly a departure from long-standing U.S. policy. He isn’t particularly interested in toppling the regime of leader Kim Jong Un and isn’t looking to force a reunification of the two Koreas, the person said. He instead wants to push for their long-term cooperation.

A strike on WHAT?

Their military is dispersed and everything is deep in hardened underground bunkers.

Even their airbases are underground.

(Seriously, the runways are under mountains with blast proof enrances.).

Isn't there anyone at the Pentagon with enough balls to stand up and say, "No, Mr. president, that's simply not going to work?"