What is the current reading on the Richter Scale for Washington D.C.

Good old fashioned corruption in addition to the political corruption only Trump among all our Presidents could commit.

I hope this story has legs.

At some point Lachlan Murdoch is going to have had enough.
Top


Washington (CNN)Senate Judiciary Committee Chairman Lindsey Graham of South Carolina said on Tuesday that he plans to invite Rudy Giuliani, President Donald Trump's personal lawyer, to speak to the committee about Ukraine.
In a series of tweets, Graham, a South Carolina Republican, wrote, "Have heard on numerous occasions disturbing allegations by @RudyGiuliani about corruption in Ukraine and the many improprieties surrounding the firing of former Prosecutor General Viktor Shokin."
"Given the House of Representatives' behavior, it is time for the Senate to inquire about corruption and other improprieties involving Ukraine," he wrote, adding, "Therefore I will offer to Mr. Giuliani the opportunity to come before the Senate Judiciary Committee to inform the committee of his concerns."
In response to a request for comment on Graham's announcement, Giuliani told CNN, "Love Lindsey, but I am still a lawyer and I will have to deal with privilege."

But Giuliani added, "Given the nature of his invitation about my concerns I might be able to do it without discussing privileged information."


'I Don’t Trust Anyone at All.' Ukrainian President Volodymyr Zelensky Speaks Out on Trump, Putin and a Divided Europe


Wise man. He knows he has to walk a tightrope and watch his words carefully.

Reading this made me think of political experience. trump had none, but was touted as a successful businessman (I threw up a little typing that) whereas Zelensky was a comedian. Who'da thunk the comedian would have better presidentin' skillz?

Although, to be fair, trump isn't so much a businessman as he is a tool, a cheat and a grifter.


Hardly six months into his tenure as the President of Ukraine, Volodymyr Zelensky has already learned to temper his expectations. He does not expect his first round of peace talks with Russia, which are scheduled to take place in Paris on Dec. 9, to end the war that has been raging along their border for the past five years. Nor does he expect too much from his Western allies going into these negotiations, Zelensky said in a wide-ranging interview on Saturday.

Speaking to reporters from TIME and three of Europe’s leading publications, the President explained that, despite getting caught up in the impeachment inquiry now unfolding in Washington, D.C., Ukraine still needs the support of the United States.

Otherwise his country does not stand much of a chance, Zelensky said, in its effort to get back the territory Russia seized from Ukraine in 2014, starting with the Crimean Peninsula. Nor can Ukraine rely on steady financial support from abroad if President Donald Trump and his allies continue to signal to the world that Ukraine is corrupt, Zelensky said. “When America says, for instance, that Ukraine is a corrupt country, that is the hardest of signals.”

Look at the road Ukraine has traveled since 1991. The political and economic overclass is thoroughly penetrated by Russian intelligence and corrupted by Russian money. Essentially Putin has tried to buy out Ukraine to re-establish Russia's status as an imperial power in Europe. But at the same time, younger Ukrainians are looking West, towards the rest of Europe, rather than towards Moscow. Putin has made it very clear that he will stop at nothing to prevent that westward pivot and to keep Ukraine within the Russian sphere of influence. Only someone who has swallowed Russian propaganda could believe Putin did not order the poisoning of Viktor Yuschenko with dioxin, or that the armed "Little Green Men" in unmarked uniforms who showed up in Crimea before the formal annexation weren't Russian troops. Russian tanks and troops are in the Donbass. The Russians or their lackeys even "accidentally" shoot down a Malaysian Air passenger jet with a highly-advanced surface-to-air missile system in a nice little display of territorial dominance to underscore the point that they can do literally anything, including murdering hundreds of civilians from uninvolved nations, and pay absolutely no price for it. Then the Black Ledger drops, and reveals the extent to which Russian money has teamed up with American political consultants (from the orbit of both American political parties, no less) to more or less lobby for making Ukraine a vassal state of Russia.

Given those circumstances, one certainly can't blame the Ukrainian people for deciding to pull someone who was as far from their political establishment as possible. What other conclusion could be drawn except that the establishment was fully in the pocket of Vladimir Putin? Seems pretty reasonable to me. The fact that Zelensky has - so far, at least - played the high-wire act fairly skillfully is either a testament to his natural political talent or to his having excellent advisors around him. And I'm not well-enough informed to make a judgment on that.
"There's no play here. There's no angle. There's no champagne room. I'm not a miracle worker, I'm a janitor. The math on this is simple; the smaller the mess, the easier it is for me to clean up." -Michael Clayton

Good points, and may I add that Zelensky appears wise enough to listen to those advisors.

Trump et al are claiming that Zelensky denied a quid pro quo in that interview but as I read it, that isn’t what he said at all.
Top

Jeffrey wrote: ↑Mon Dec 02, 2019 2:15 pm Trump et al are claiming that Zelensky denied a quid pro quo in that interview but as I read it, that isn’t what he said at all.

Even if he did, what does it matter? He's savvy enough to understand that his country's fate rests, in large part, on the support of the US, which means the US President. If he said "yeah, Trump definitely tried to shake me down," he can kiss that support goodbye within 24 hours, and then Vladimir Putin might as well fire up the tanks, drop the pretense, and go for the full-on anschluss.
"There's no play here. There's no angle. There's no champagne room. I'm not a miracle worker, I'm a janitor. The math on this is simple; the smaller the mess, the easier it is for me to clean up." -Michael Clayton


The Ukrainian interior ministry on Thursday also announced an investigation into the possible illegal surveillance of the then American ambassador to Kiev, Marie Yovanovitch, following the release of encrypted messages this week by the U.S. Congress as part of the impeachment case.

Burisma Holdings was at the center of attempts by Trump last July to persuade Ukraine to announce an investigation into Hunter Biden, who is the son of Democratic U.S. presidential contender Joe Biden and used to have a seat on the Ukrainian company’s board.

Trump’s efforts have led to the Republican being impeached on charges of abuse of power and obstruction of Congress. The president, who denies wrongdoing, faces a trial at the U.S. Senate that could have consequences for his efforts to seek a second term in a November election.

California-based cybersecurity company Area 1 Security on Monday identified the hacking of Burisma and linked it to Russia’s Main Directorate of Military Intelligence, or GRU.

Brandi Buchman
@BBuchman_CNS
The next doc dump from @weareoversight is coming.

While you wait, here's my report from the first release of Energy Dept docs that offered insight into the role Rick Perry and others were tapped to play in Ukraine. https://www.courthousenews.com/energy-d ... documents/ … …

American Oversight
@weareoversight
· 5h
From obstructing Congress to rushing the trial without witnesses, the White House and its allies have worked overtime to hide the facts about the president's Ukraine scheme.

The paper trail is going to come out anyway - with more records from the Energy Dept coming today. 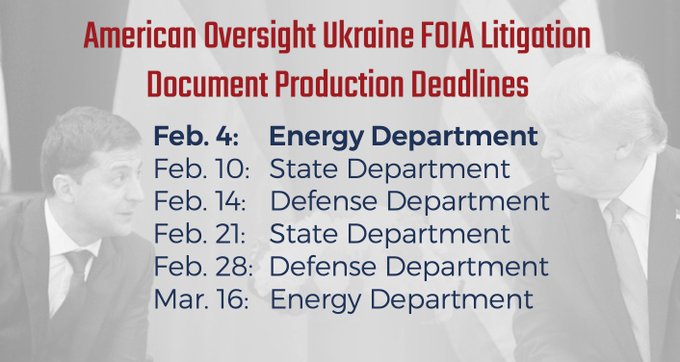 
Seven former U.S. ambassadors to Ukraine on Tuesday condemned efforts to use the country as a vehicle to “sow division” during the 2020 presidential election campaign.

The letter, which appeared on the website of the Atlantic Council, did not specify what prompted concern among the former ambassadors. But John Herbst, the U.S. envoy to Kyiv from 2003 to 2006 and now director of the think tank’s Eurasia Center, said it was motivated by leaked recordings of years-old phone conversations between then-Vice President Joe Biden and Petro Poroshenko, Ukraine’s president at the time.

The recordings, which offered little new insight into Biden’s actions in Ukraine, show that Biden — as he has publicly acknowledged — linked U.S. loan guarantees for Ukraine to the removal of a prosecutor general in 2015. But the tapes allowed Trump’s allies to resurrect allegations against the presumptive Democratic nominee.