No sightings of Michelle and the daughters yet.

Aww, President Obama is enjoying the sunshine and golf, while "poor" Individual-1 is stuck at the run-down residence at the White House, shutting down his government.
"Try not. Do or do not. There is no try."
-- Yoda
Top


Gallup: The Obamas are America's most admired man and woman

Michelle Obama unseated Hillary Clinton as the most admired woman in the U.S., claiming the title alongside her husband, former President Barack Obama, who has remained the most admired man for 11 straight years, according to Gallup's annual poll.

The big picture: Clinton held the title of most admired woman for 17 consecutive years, but this year was surpassed by both Obama and Oprah Winfrey. President Trump came in second place for the fourth year in a row, marking only the 13th time — and Trump's second — that a sitting president didn't top the list since its inception in 1946.

My grandpa got Michelle Obama’s book for Christmas, started crying, and then said, “I can take myself off of the waitlist at the library, I was 353rd in line to read it.”

Barack Obama
2 hrs ·
As 2018 draws to a close, I’m continuing a favorite tradition of mine and sharing my year-end lists. It gives me a moment to pause and reflect on the year through the books, movies, and music that I found most thought-provoking, inspiring, or just plain loved. It also gives me a chance to highlight talented authors, artists, and storytellers – some who are household names and others who you may not have heard of before. Here’s my best of 2018 list - I hope you enjoy reading, watching, and listening.

Here’s a reminder of the books that I read this year that appeared on earlier lists:
Becoming by Michelle Obama (obviously my favorite!)
An American Marriage by Tayari Jones
Americanah by Chimamanda Ngozi Adichie
The Broken Ladder: How Inequality Affects the Way We Think, Live, and Die by Keith Payne
Educated by Tara Westover
Factfulness by Hans Rosling
Futureface: A Family Mystery, an Epic Quest, and the Secret to Belonging by Alex Wagner
A Grain of Wheat by Ngugi wa Thiong’o
A House for Mr Biswas by V.S. Naipaul
How Democracies Die by Steven Levitsky and Daniel Ziblatt
In the Shadow of Statues: A White Southerner Confronts History by Mitch Landrieu
Long Walk to Freedom by Nelson Mandela
The New Geography of Jobs by Enrico Moretti
The Return by Hisham Matar
Things Fall Apart by Chinua Achebe
Warlight by Michael Ondaatje
Why Liberalism Failed by Patrick Deneen
The World As It Is by Ben Rhodes

Here are my other favorite books of 2018:
American Prison by Shane Bauer
Arthur Ashe: A Life by Raymond Arsenault
Asymmetry by Lisa Halliday
Feel Free by Zadie Smith
Florida by Lauren Groff
Frederick Douglass: Prophet of Freedom by David W. Blight
Immigrant, Montana by Amitava Kumar
The Largesse of the Sea Maiden by Denis Johnson
Life 3.0: Being Human in the Age of Artificial Intelligence by Max Tegmark
There There by Tommy Orange
Washington Black by Esi Edugyan

My favorite movies of 2018:
Annihilation
Black Panther
BlacKkKlansman
Blindspotting
Burning
The Death of Stalin
Eighth Grade
If Beale Street Could Talk
Leave No Trace
Minding the Gap
The Rider
Roma
Shoplifters
Support the Girls
Won’t You Be My Neighbor

And finally, my favorite songs of 2018:
Apes••t by The Carters
Bad Bad News by Leon Bridges
Could’ve Been by H.E.R. (feat. Bryson Tiller)
Disco Yes by Tom Misch (feat. Poppy Ajudha)
Ekombe by Jupiter & Okwess
Every Time I Hear That Song by Brandi Carlile
Girl Goin’ Nowhere by Ashley McBryde
Historia De Un Amor by Tonina (feat. Javier Limón and Tali Rubinstein)
I Like It by Cardi B (feat. Bad Bunny and J Balvin)
Kevin’s Heart by J. Cole
King For A Day by Anderson East
Love Lies by Khalid & Normani
Make Me Feel by Janelle Monáe
Mary Don’t You Weep (Piano & A Microphone 1983 Version) by Prince
My Own Thing by Chance the Rapper (feat. Joey Purp)
Need a Little Time by Courtney Barnett
Nina Cried Power by Hozier (feat. Mavis Staples)
Nterini by Fatoumata Diawara
One Trick Ponies by Kurt Vile
Turnin’ Me Up by BJ the Chicago Kid
Wait by the River by Lord Huron
Wow Freestyle by Jay Rock (feat. Kendrick Lamar)
And in honor of one of the great jazz singers of all time, who died this year, a classic album: The Great American Songbook by Nancy Wilson

Can you share Trump's link for the New Year, also, too?
To which Trump replied, Fuck the law. I don't give a fuck about the law. I want my fucking money.
Top

WaPo: Obama makes his Billboard chart debut with remix of song from ‘Hamilton’:

Former president Barack Obama might be used to topping polls, but now he’s charting new territory: He’s a performer on a song that just hit Billboard’s hot R&B songs chart. His performance on the remix of the “Hamilton” hit “One Last Time,” featuring cast member Christopher Jackson and gospel singer BeBe Winans, made its debut at No. 22 on the list.

The “One Last Time” entry is called the “44 Remix,” on which Obama reads a passage from George Washington’s farewell address.

The defending champion NBA team steered clear of the White House, where they are not welcome.

The defending NBA champion Golden State Warriors finally got their presidential visit in Washington on Thursday ― with a previous occupant of the White House.

Most of the team met privately with former President Barack Obama, outlets reported. A photo of the get-together emerged on social media as well. The San Jose Mercury News noted that the picture was posted by a team official, but later deleted.

The meeting lasted about an hour, the San Jose Mercury News reported, citing a source.

“It was good,” Warriors forward Draymond Green told the newspaper in a typical tight-lipped response after the Warriors defeated the host Washington Wizards. Head coach Steve Kerr declined to comment.

The Warriors made the traditional White House visit as champs in February 2016, when Obama was in office, but have not been there since President Donald Trump took over.

No word on whether Obama offered them fast food.

Fox News had the same photo, but a different headline:


The NBA champion Golden State Warriors missed out on a White House visit for the second year in a row, meeting instead Thursday with former President Barack Obama rather than President Trump.

Pro sports teams are traditionally invited to the White House after winning championships, but Trump rescinded the offer to the Warriors in September 2017 after stars Stephen Curry and Kevin Durant made critical remarks. Curry and Durant said their team wasn't planning on visiting Trump anyway.

No where in the article does it state that Trump had actually invited the Warriors to the White House this year, but why pass up an opportunity to smear the Warriors?
MAGA - Morons Are Governing America
Top

The Obama Portraits Have Had a Pilgrimage Effect
One year after Kehinde Wiley’s and Amy Sherald’s paintings were unveiled, the director of the National Portrait Gallery reflects on their unprecedented impact.

This lovely and lovingly-written article will make you weep for times past, but will also give you hope that people haven't forgotten what was possible in this country, and will be possible once again.
Top

This made me laugh - & then cry. I miss having a president with a sense of humor & who is confident enough to poke fun at himself (not to mention the whole really smart & decent bit). Just hearing that little bit makes what we have now seem just that much worse.

The Obama Bomber Moment happened at a Duke-UNC basketball game.


The former president and one of America’s many dads Barack Obama wore a black bomber jacket with “44” embroidered on the sleeve Wednesday night, and the internet is extremely amped about it. ... 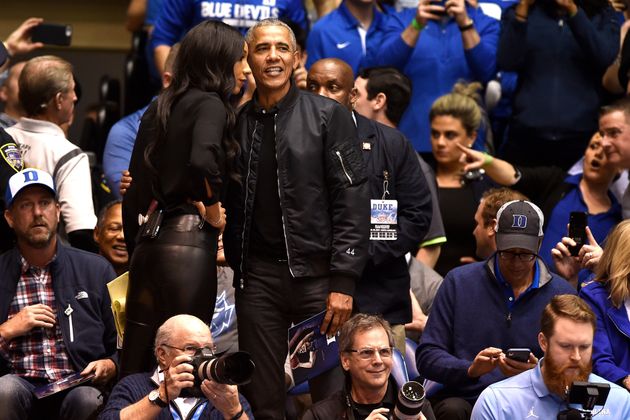 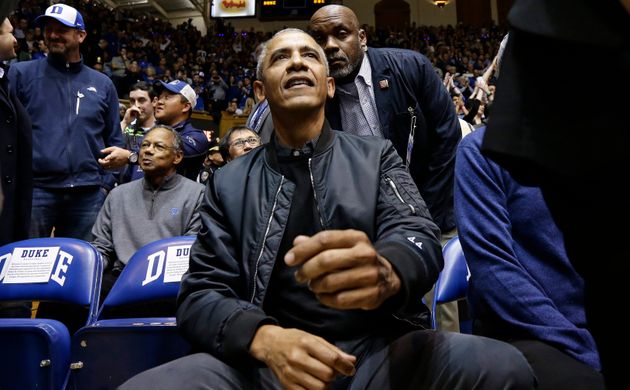 While it’s immediately obvious that the “44” is a reference to the 44th U.S. president, the jacket’s origin was not. GQ tracked down the bomber and found that it retails for $595 from Rag & Bone.

Marcus Wainwright, the founder and chief brand officer at Rag & Bone, told the publication that the company custom-made the jacket for Obama toward the end of his second term and “wasn’t expecting him to wear it in public.”

However, after Wainwright saw The Obama Bomber Moment™, he told GQ: “Making a jacket for the president, that’s fucking awesome. How else can you put it? When they look good in it, it’s even more gratifying.”


Obama Says He Based Decisions on ‘Facts, Reason and Logic’

Salt Lake City (AP) -- Former President Barack Obama said Wednesday that he tried to build a culture centered around problem-solving and not personal gain while in the White House — an effective strategy for any organization that also prevents "big scandals and indictments."

Obama's comments drew applause from a crowd of about 9,000 people at a business conference in Salt Lake City.

Obama didn't mention President Donald Trump and wasn't asked about him during a question-and-answer session, but he made several comments that seemed to allude to the state of the country and the Trump administration.

"Things like rule of law, democracy and you know, competence and facts; those things are not partisan, but they also don't happen automatically," Obama said. "There has to be citizens who insist on it and participate to make sure it happens. Democracy is a garden that has to be tended."


I am not "someone upthread".
Trump needs to be smashed into some kind of inedible orange pâté.
Top

Michelle Obama's publisher said that her book "Becoming" has sold almost 10 million copies and could be the most successful memoir in history, Bloomberg reported Tuesday.

The success of the former first lady's book helped German media company Bertelsmann SE, which owns American mega-publisher Penguin Random House, earn $20 billion in revenue last year, the most it's taken in since 2007.

Penguin Random House CEO Markus Dohle said Obama's book could become a "modern classic" and added that he hopes former President Obama's forthcoming book, as yet untitled and with no projected release date, will meet with the same success. Earlier this month, the former president said he was "at the tail end" of writing his memoir.

"Becoming" became a publishing phenomenon almost instantly after its release last November. It is the No. 1 hardcover nonfiction bestseller on the New York Times' list, where it has spent 18 weeks. And as of Tuesday morning, it was the No. 4 bestselling book on Amazon.

Luckily dotus is illiterate and will miss the news

“If everyone fought for their own convictions there would be no war.”
― Leo Tolstoy, War and Peace
Top
Post Reply
456 posts