fierceredpanda
Posts: 3792
Joined: Sun Apr 17, 2016 3:04 pm
Location: BAR Headquarters - Turn left past the picture of King George III
Occupation: Criminal defense attorney - I am not your lawyer, and my posts do not constitute legal advice

"There's no play here. There's no angle. There's no champagne room. I'm not a miracle worker, I'm a janitor. The math on this is simple; the smaller the mess, the easier it is for me to clean up." -Michael Clayton

Hey at least Gosar’s siblings don’t have to worry about getting infected by him.

If anyone is still searching for cleaners that kill bacteria and viruses, maybe consider OdoBan. It also gets rid pet accident odors, which is how I discovered it. It has also been lab tested against HIV, killing the virus in 60 seconds on hard nonporous precleaned surfaces. Kills viruses, bacteria, mold and mildew. Mold is a problem in my house, and this works well and makes the house smell great. Easy to find at WalMart, HomeDepot, etc.

No idea about the coronavirus, but helpful for pretty much everything else. I even mop the floor with it!

Well, we've got #2 in Hawaii, and this one looks like he might have spread the virus to many other people. "... elderly man who lives on Oahu who recently traveled to Washington State.

Officials said he fell ill on March 2 and returned to Hawaii on March 4 when he went directly to a hospital. During his initial visit, a coronavirus test was not done.

An ambulance then took him to a hospital on March 7 when hospital staff then decided to conduct the COVID-19 test, which came back as a presumptive positive."

So has our medical genius said any more about the damn test kits???? And why the hell did the hospital personnel not become concerned when he said he became ill in Washington???? (I think that's my hospital. I was there for hours on the 3rd & 4th.)


He's a traditional guy. Or a throw-back.

Road my bike around the Port of Oakland today to see the intense preparations for the unloading of the Princess Virus cruise ship. It was impressive. Busses and trucks from all sorts of agencies - local, state and feds. Security was tight, as they scrambled to transform a busy intermodal container ship port into a facility where infected passengers could safely depart, while ensuring the local neighborhood would be safe.

busterbunker wrote: ↑Mon Mar 09, 2020 5:07 am Road my bike around the Port of Oakland today to see the intense preparations for the unloading of the Princess Virus cruise ship. It was impressive. Busses and trucks from all sorts of agencies - local, state and feds. Security was tight, as they scrambled to transform a busy intermodal container ship port into a facility where infected passengers could safely depart, while ensuring the local neighborhood would be safe.

Ireland has St. Patricks day in a week, and on the newspaper this morning it was saying that hundreds of Parades are on the brink of cancellation.

I am living in Vietnam, HCMC, and although there no runs on toilet paper, masks have become scarce, and all schools have been closed since the beginning of Feb. resulting in about 50% or less off usual traffic. I work at home unconnected to Vietnam, so I am selfishly enjoying the livability of things (walking my dog is always a breeze now), but I am dreading the eventual economic backlash.
Luckily Vietnam had been quite well with only a few active cases, but now this in Danang. This is only the second time since the end of the American War that a carrier has docked in Nam...

New cases of the coronavirus are being discovered in Vietnam, in the same port as where 6,500 Sailors and Marines on the USS Theodore Roosevelt are docked.
...
The country went 22 days with no new infections, but on Friday, Vietnamese health officials discovered nine new cases, all from foreign tourists.

"Literally, the country was ready to announce that they had conquered this virus. That it had been eradicated. And then within 24 hours, all of this happens," Furman said.

Vietnamese media reported that two British tourists who tested positive for coronavirus were intercepted and quarantined in Da Nang. It's the same city that now hosts the USS Theodore Roosevelt.

Now, this is only salacious rumor, but an American friend of mine living in Da Nang said word is the Brits visited some ladies of the evening... True or not, it is a small city with a very small expat/tourist nightlife area, so that is worrisome in itself. I first heard about it through a FB post from the pizza restaurant they ate at, announcing they are closing for two weeks...

"I said we will sacrifice the economy in the short term to protect our people's health, people's lives!" - Nguyễn Xuân Phúc


Italian penitentiary police said Monday that six inmates protesting virus containment measures at a northern Italian lock-up have died after they broke into the infirmary and overdosed on methadone.

The protest Sunday in Modena was among the first of more than two dozen riots at Italy’s overcrowded prisons that grew Monday. Human rights advocates have been warning that increasing tensions over fears of coronavirus were hitting inmates particularly hard, especially after restrictions were imposed on family visits to prevent transmissions.

On Monday, inmates climbed onto the roof of the San Vittore prison in Milan and held up a painted sheet reading “Indulto,” Italian for pardon.

Donato Capece, secretary general of the penitentiary police union, accused the government of abandoning the prison system, refusing to provide sufficient measures to prevent the spread of the virus among inmates and leaving guards on their own to deal with prisoners who could now only speak to relatives by phone or Skype.

"Everything old is new again."

History Lovers Club
@historylvrsclub
·
36m
Policemen stand in a street in Seattle, Washington, wearing protective masks made by the Seattle Chapter of the Red Cross, during the influenza epidemic in 1918.


I love the poorly educated!!!


BREAKING: A D.C. priest has Coronavirus. He offered communion and shook hands with more than 500 worshippers last week and on February 24th. All worshippers who visited the Christ Church in Georgetown must self-quarantine. Church is cancelled for the first time since the 1800's


I love the poorly educated!!! 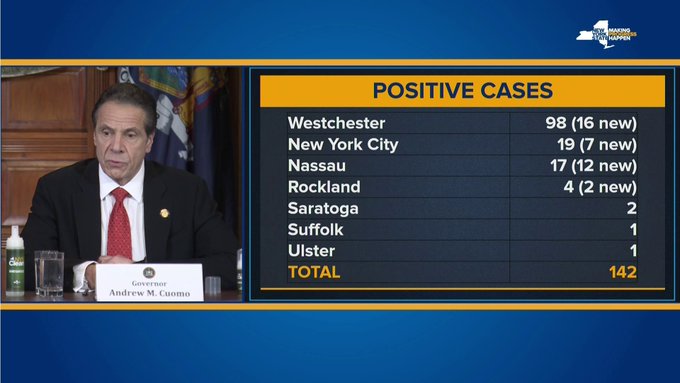 Many colleges already doing this.

David Nakamura
@DavidNakamura
·
58m
I was literally talking on the phone about coronavirus with a former Secret Service agent who said: "Forget about rope lines. Those are the ultimate threat given hand-to-hand contact is the way this spreads" ... when this
@robcrilly
pool photo of Trump in Florida hit my inbox. 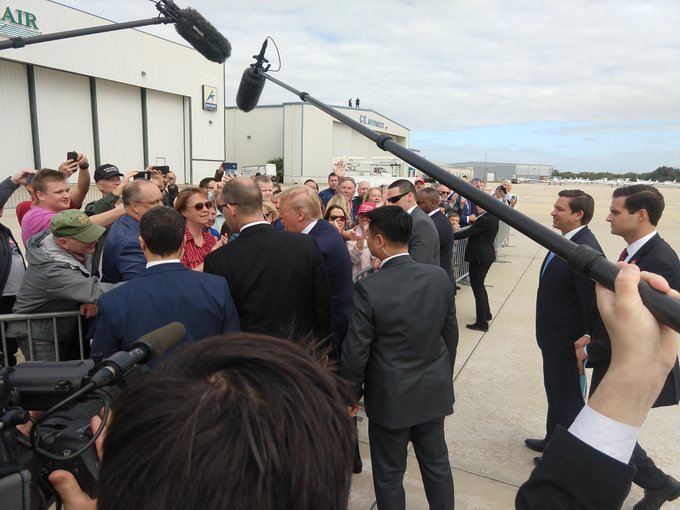 What Trump did this weekend per CNN's
@kaitlancollins
and
@Kevinliptakcnn
:

I don't know if anyone watched Gavin Newsome's presser yesterday where HE (not the Trump Administration) announced plans and logistics for getting American's off that cruise ship in Oakland. (Even though the Feds will be handling transport). It was kind of stunning to see someone who was articulate and clearly had a deep command of the facts.