I have three of my media server/client machines setup to take work from Folding@Home. A couple of them are older desktops that got repurposed and run i5 or i7 processors with midrange or better NVidia GPUs so they're reasonably good machines. They sit idle 95% of the time so I thought this was a good way to utilize them. They've been kind of quiet the last day or two though.

"Why Iron-man and why not Fe-male? This joke is not for everyone." - Monde Mobsinner Bakaqana to The Science Nerds on Twitter.

President George W. Bush presented the Presidential Medal of Freedom to Dr. Anthony Fauci in 2008. These are Mr. Bush's remarks:

“The man who would lead the fight against this dreaded disease (AIDS) came from an Italian American family in Brooklyn. Even as a boy, Tony was distinguished by his courage. In a neighborhood full of Brooklyn Dodgers fans -- (laughter) -- he rooted for the Yankees. (Laughter.) Tony earned a full scholarship to Regis High School, a Jesuit school in Manhattan. And he still quotes what he learned from Jesuit teaching: "Precision of thought, economy of expression." And now you know why he never ran for public office. (Laughter.)

Those who know Tony do admit one flaw: sometimes he forgets to stop working. He regularly puts in 80-hour weeks. And from time to time, he's even found notes on his windshield left by coworkers that say things like, "Go home. You're making me feel guilty." (Laughter.) A friend once commented that Tony was so obsessed with work that his wife must be a pretty patient woman. The truth of the matter is, she's very busy herself. Christine Grady is a renowned bioethicist. And together they raised three talented daughters: Jennifer, Meghan, and Allison. And I hope each of you know that for all Tony has accomplished, he considers you to be one of his -- not one of his -- his most important achievement. Your love and support have strengthened him as he works to save lives across the world.

For his determined and aggressive efforts to help others live longer and healthier lives, I'm proud to award the Presidential Medal of Freedom to Dr. Anthony S. Fauci.” —President George W. Bush

Oh gosh, can you imagine Donald Fuckwit Asshole Trump ever delivering a light and generous speech like that? Not once did GWB feel a need to mention himself or how the award was due to his own perspicacity in selecting and mentoring the recipient and not quite as great as his own achievements. Of course Trump has no discernable sense of humor so words are out of the question, except nasty lies about Hillary Clinton or Barack Obama.

Trump promised scores of big-box retailers would offer parking lots for covid-19 testing. There are only five of them.

Two weeks ago, President Trump promised a network of drive-through covid-19 testing sites across the country where people could be tested “very safely, quickly and conveniently.” In a Rose Garden news conference, chief executives of Target, Walgreens, Walmart and CVS said they would work with the government to provide space in store parking lots.

While the four retailers have a combined 26,400 U.S. stores, this vision of a proliferation of coronavirus testing sites has yet to materialize. Walgreens and CVS have opened one site each, while Walmart last weekend opened two drive-through testing locations near Chicago. Target hasn’t opened any. Rite Aid, which joined the effort later, has opened one drive-through facility in Philadelphia.

Like much of the nation’s coronavirus response, the burden of organizing and operating these testing sites has fallen to state and local governments. On occasion, they’ve enlisted the help of private industry. But an array of logistical challenges, ranging from a shortage of testing supplies to funding, has meant only a small fraction of Americans can get diagnosed for covid-19 in a way that is routine in South Korea and elsewhere.

WaPo Coronavirus newsletter wrote:Though much of the country has been ordered to stay at home to slow the virus's spread, many federal workers are still required to come to the office under potentially dangerous conditions, a Post investigation found. “Hundreds of front-line workers sit side by side in small cubicles processing passport applications for the State Department,” the report said. “The employees have 15 minutes a day to wipe their desks clean with supplies they must bring from home.”

From 1 case 4 days ago to 4 today in our town. I expect it to shoot up considerably, since the three new cases were all employees at a popular Hispanic market across town.

The median age of the 14 additional reported deaths is 81.

That suggests a significant fraction of those victims were people who might have soon succumbed to any passing serious infection or random accident. Many would be in poor health; all the top half would have had age-related deterioration of their immune systems.

For those who can't recall (and I know Fogfolk are intelligent, but everybody forgets, I don't intend to be patronizing), the median of a sample is its midpoint value so a median age of 81 means half the sample are over 81 and half under. That's a lot of old folk.

Sam the Centipede wrote: ↑Sat Mar 28, 2020 6:08 pm That suggests a significant fraction of those victims were people who might have soon succumbed to any passing serious infection or random accident. Many would be in poor health; all the top half would have had age-related deterioration of their immune systems.


Not necessarily. If it's like it is here, age is one of the criteria for even getting tested. We've had at least one out-of-the-age-range death that wasn't counted until a week after death, because he wasn't tested because he was "too young" to have it. If they're only testing old people, that skews the numbers, at least initially.

Ya. Like in the USA its very very hard to actually get tested here in Ireland right now.

Breaking: Confirmed U.S. coronavirus-related deaths double in two days, hitting 2,000. It took about a month from the first confirmed death for the United States to record 1,000. That toll has risen rapidly as officials have been warning the worst is yet to come.

Breaking: Confirmed U.S. coronavirus-related deaths double in two days, hitting 2,000. It took about a month from the first confirmed death for the United States to record 1,000. That toll has risen rapidly as officials have been warning the worst is yet to come.

Winning! So tired of it.

Now 1,730. The rate of increase in daily new cases continues I expect it to reach about 2200 today.

Travis Akers
@travisakers
This picture is from 3pm today.

You can see exactly where Duval County ends and St. John’s County begins.

All beaches in Duval are closed, while St. John’s only blocked parking at the beach.

Gov. DeSantis needs to order a state-wide closure of all Florida beaches. 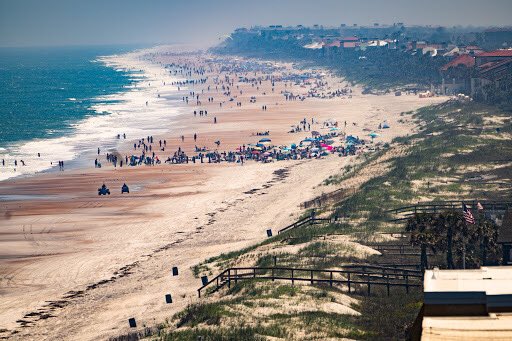 So far Florida has 840 new cases today ranking 5th out of the 50 states. That puts it between California and Michigan.

As it approaches dusk on the West Coast, the number has crossed 2K - a doubling in two days.

Gee, I wonder what they will be talking about?

I want someone to get Kellyanne and grill her over her this is under control comments she made a couple of weeks ago.

ScreenHunter_193 Mar. 28 18.49.jpg
You do not have the required permissions to view the files attached to this post.

Illinois reports first known U.S. death of an infant with the coronavirus.

An infant who tested positive for the coronavirus has died in Chicago, the authorities said on Saturday. It was the first known death of a child younger than a year old with the virus in the United States, although the authorities in some states do not release details about people who die.

Newborns and babies have so far seemed to be largely unaffected by the coronavirus, but three new studies suggest that the virus may reach the fetus in utero.

“There has never before been a death associated with Covid-19 in an infant,” said Dr. Ngozi Ezike, the director of the Illinois Department of Public Health. “A full investigation is underway to determine the cause of death.” Older adults, especially those in their 80s and 90s, have been viewed as the most vulnerable in the outbreak, but younger people have also died.

And looking at those numbers... Italy and Spain who had a head start and considering populations. The USA is just getting started. Too many people in this country are not heeding the stay home requests. We'll be #1 across all the bad charts soon at this rate.

Shit’s getting real. Vinalhaven is an island off the coast of Maine, population 1165. And arrogant New Jersey construction workers? Whodathunk?

The Knox County Sheriff’s office is investigating a report that several people with guns cut down a tree and used it to block a driveway Friday afternoon on Vinalhaven in an alleged attempt to quarantine the people who live in the residence.

The alleged incident appears to be related to the coronavirus outbreak.

“There are two guys from [New Jersey], on Vinalhaven who have been renting a house since September while working on a construction job,” she wrote Saturday. “They went to the mainland and were targeted because of their license plate when they arrived back on Vinalhaven.

“There were some words between them and some locals and the conversation apparently didn’t go very well,” McDonald, who represents Vinalhaven, continued. “I did hear the guys from [New Jersey] were fairly arrogant in their response. A group of local vigilantes decided to take matters into their own hands and barricaded these guys into their rental property.”

Deputies, along with members of the Maine Marine Patrol and a U.S. Coast Guard boarding party made contact with the complainant and found that a tree had been cut down and dragged into the driveway to block the way.


"[Moderate] doesn't mean you don't have views. It just means your views aren't predictable ideologically one way or the other, and you're trying to follow the facts where they lead and reach your own conclusions."
-- Sen. King (I-ME)

According to Worldometer, data for 3/28:

Just going to post this hear because people can marvel at it, then click on it and get a load of the screaming idiocy in the replies.

I hate to say it, but your country is fucked.