Newsom set the special election primary for March 3, the same date as the Golden State’s presidential and congressional primaries. Candidates from both parties run on the same ballot. For the special election, if one candidate garners more than 50 percent of the vote, he or she wins the race outright. If no one gets above 50 percent, the top two would advance to a May 12 election.

The March 3 date was expected but could be bad news for Republicans, because Californians are expecting high Democratic turnout for the contested presidential primary. Hill flipped the longtime Republican 25th District, which is north of Los Angeles, last fall, defeating GOP Rep. Steve Knight by 7 points.

The special election would be for the remainder of Hill’s term, which runs until January 2021. Voters on March 3 would also hold a primary for the regular two-year term that begins in 2021. The top two vote-getters in that election would face off next November.

538: What We Know About That California Special Election And What It Could Mean For 2020:

The California presidential primary on March 3 won’t be the only hotly contested race on the Golden State ballot: There will also be a special election in California’s 25th District.

Freshman Democratic Rep. Katie Hill resigned her seat in early November amid allegations of improper relations with her staff. Democrats now face a precursor to 2020 as the party gauges its strength in one of its new suburban pickups. Hill won the Los Angeles metropolitan-area seat by about 9 points in 2018’s blue wave, but FiveThirtyEight’s partisan lean metric[] indicates that the seat doesn’t lean toward either party, which means Democrats don’t have a built-in advantage. And with former Republican Rep. Steve Knight back on the ballot, it’s likely to once again be a competitive contest.

The Democratic candidates include state Assemblywoman Christy Smith, who appears to be the party establishment’s pick with endorsements from Sen. Kamala Harris, multiple members of the U.S. House and even Hill herself. But Cenk Uygur, creator of the online news and commentary program The Young Turks and co-founder of Justice Democrats, a progressive organization seeking to move the Democratic Party to the left, has also announced that he’s running. Uygur’s past sexist comments, which led to his departure from the Justice Democrats in 2017, could prove a problem for him, though, and he doesn’t live in the district, either. However, Uygur could still raise a lot of money from his online following to build a competitive campaign.

And on the Republican side, Knight is seeking a comeback after losing to Hill in 2018. At this point, at least two other candidates are running, including one controversial name: George Papadopoulos, a former Trump campaign foreign policy adviser who pleaded guilty to lying to the FBI during the investigation into Russian interference in the 2016 election. Like Uygur on the Democratic side, Papadopoulos could harness national support to raise money, having elevated his profile through media appearances since leaving prison and via his new book, which claims he was taken down as part of an effort by the “deep state” to upend Trump’s presidency. Mike Garcia, a Navy veteran and businessman, was already running to take on Hill before news of her resignation, and he’s raised nearly $500,000 so far.

Democrat @ChristyforCA25 advances to the November election, where she will face (and beat!) whichever @GOP comes in 2nd.Smiling face with sunglasses 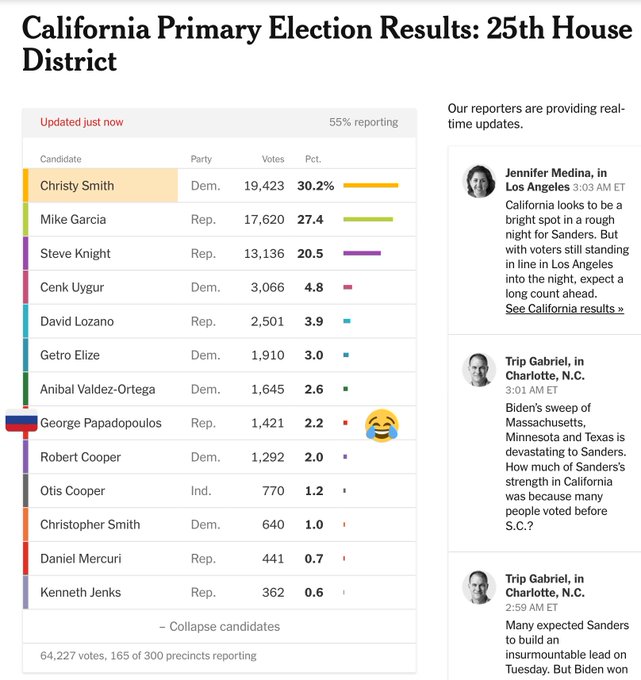 In CA-25, Knight presently is in third -- in both elections.* Knight is the incumbent who Hill defeated in 2018.

* There's a special election to fill the remainder of Hill's term, and the "usual" primary election.

Someone is all over Twitter today fired up about some kind of voter fraud he wants Gov. Newsome to fix.

@realDonaldTrump
Governor
@GavinNewsom
of California won’t let restaurants, beaches and stores open, but he installs a voting both system in a highly Democrat area (supposed to be mail in ballots only) because our great candidate,
@MikeGarcia2020
, is winning by a lot. CA25 Rigged Election!

Kendra wrote: ↑
Sat May 09, 2020 2:10 pm
Someone is all over Twitter today fired up about some kind of voter fraud he wants Gov. Newsome to fix.

@realDonaldTrump
Governor
@GavinNewsom
of California won’t let restaurants, beaches and stores open, but he installs a voting both system in a highly Democrat area (supposed to be mail in ballots only) because our great candidate,
@MikeGarcia2020
, is winning by a lot. CA25 Rigged Election!

The upcoming special election is close, as the expected low voter turnout likely will help Garcia. Hence him being angry about more polling stations.

Thank you Bob. I seem to recall that trump and cronies were anti mail voting and peeps had to go to the voting booths, and now he's angry that's going to happen?

Now it's making more sense to me.

@KatieHill4CA
Oh THIS is what it’s about.

@realDonaldTrump
and the republicans are screaming rigged election because an in-person polling place was added in a major city in the district that didn’t have a single one - a city run by a REPUBLICAN mayor & city council. Please.

Results are coming in for today's special election.

So there are likely more ballots to be counted (which will probably favor Smith), but doubtful she'll be able to overcome that deficit.

While I realize Katie Hill's ex husband contributed to her travails, she should have avoided office romances both before and after being elected to Congress. Sad story for which she is partially responsible.
Top

Sterngard Friegen wrote: ↑
Wed May 13, 2020 1:27 pm
While I realize Katie Hill's ex husband contributed to her travails, she should have avoided office romances both before and after being elected to Congress. Sad story for which she is partially responsible.

ITA. Of course, if she were a Republican she wouldn't have resigned.
I love the poorly educated!!!

CNN: Republicans win back California House seat they lost in 2018 after Democrat concedes

Republicans have won back a California US House seat they had lost in the 2018 midterms, flipping it from blue to red in a high-profile victory

The win came after Democrat Christy Smith conceded to Republican Mike Garcia on Wednesday in the special election for seat left vacant when Katie Hill, a Democrat, resigned amid controversy last year.

"While it's critical that we ensure every vote is counted and recorded, we believe that the current tally shows Mike Garcia is the likely victor in the May 12 special election. As such, I'd like to congratulate him," Smith said in a statement on Wednesday.

What the eff is "ballot harvesting," and why the eff isn't it illegal in Orlyfornia? Well, according to someone on discord "Ballot harvesting is where an operative collects ballots from voters and delivers them. They will sometimes "accidentally" lose ballots that would go for their opponents. Or substitute. or alter." May also include Going into old folks homes and tricking them into voting GOP I mean for a certain candidate as both sides are the sale
The difference between the Middle Ages, and the Age of the Internet, is that in the Middle Ages no-one thought the Earth was flat.
Top

"I hate that we had to do the thing we baselessly rail against!"