Great commercial except for the Hallmark Channel music. Which was just awful.

Sterngard Friegen wrote: ↑Tue Jul 09, 2019 10:29 am Great commercial except for the Hallmark Channel music. Which was just awful.

From a producer's perspective the music targets the Feelers (Myers Briggs), not the Thinkers (Myers Briggs). It is primarily inoffensive, except to the Sterngards out there, thus not eliminating others who watch and listen to the text about big city politician ignoring folks back home. Also, too, when, WHEN has a Hallmark production lied? It was genius to use that music especially with the color shots of real people (voters) and Amy versus the black and white shots of the Turtle.

"Why Iron-man and why not Fe-male? This joke is not for everyone." - Monde Mobsinner Bakaqana to The Science Nerds on Twitter.
Top

Yeah. What do I know. I don't even watch the Hallmark Channel.

If those "movies" on Hallmark didn't have music throughout the entire movie there would be nothing. As bad as the music is, the acting is worse. Where else do you find 35 year-old women giggling like teenagers half their age? No, I don't watch Hallmark, but I sit here at the computer doing my TFB and language studies while GF is watching Hallmark behind me. I try various volume settings and use headphones, but nothing blocks it out completely.

Amy McGrath will try to do what Beto O’Rourke couldn’t: Remove a high-profile Republican from a deep-red state.

#DitchMitch should be the trending hashtag on Twitter every day for Americans. IMO, Individual-1 is mostly air without McConnell's enablement and refusal to uphold his oath to the Constitution vs. the party.

A new billboard along I-65 in Hart County is raising some eyebrows. The sign reads, “Putin’s Mitch” and features a photo of Senate Majority Leader Mitch McConnell.

https://www.joemygod.com/2019/07/kentuc ... ins-mitch/
Wasn't there a massacre in Bowling Green? I seem to recall KellyAnne Conway commenting on it.

That’s hilarious. I’ve been thinking it would be great if McConnell went home to Ditch Mitch billboards everywhere.

Can't link,* but I saw several reports this past week about miners with black lung upset with Mitch for not being bothered to stick around and chat with them.

*it's early and I'm still half asleep so sue me.

This might stick to Addison and it should, it's true. He refused to allow the government to warn people about the Russian hacking, he wouldn't join a bipartisan statement and said they'd call it a political stunt. I'm still having trouble grasping these huge amounts of money appearing out of nowhere, it's really incredible.

Sales from “Moscow Mitch” merchandise exceeded $200,000 in a 48-hour period, the Kentucky Democratic Party claimed in a Friday press release. The pejorative nickname emerged when Washington Post writer Dana Milbank suggested in an article last week that Senate Majority Leader Mitch McConnell, R-Ky., was a “Russian asset” for blocking legislation to bolster election security. MSNBC host Joe Scarborough went on the air and called McConnell “Moscow Mitch” for supposedly “aiding and abetting” Russian President Vladimir Putin’s efforts to interfere with American elections, as it was accused of doing during the last presidential election in 2016.

McConnell, usually reserved in his response to criticism, likened the insult to “modern-day McCarthyism” which, he added, “is toxic, and damaging, because of the way it warps our entire public discourse.” Capitalizing on McConnell’s ire, the Kentucky Democratic Party on Wednesday rolled out an array of “Moscow Mitch” merchandise online, including a T-shirt, a hat, drinkware, stickers and buttons. Nearly all items come with the phrase “Just say nyet! to Moscow Mitch.” “People are sick of [McConnell’s policies], and this is their way of expressing their outrage,” Kentucky Democratic Party spokeswoman Marisa McNee said in a press release. “This campaign has really caught the imagination of voters in Kentucky and across the country.” 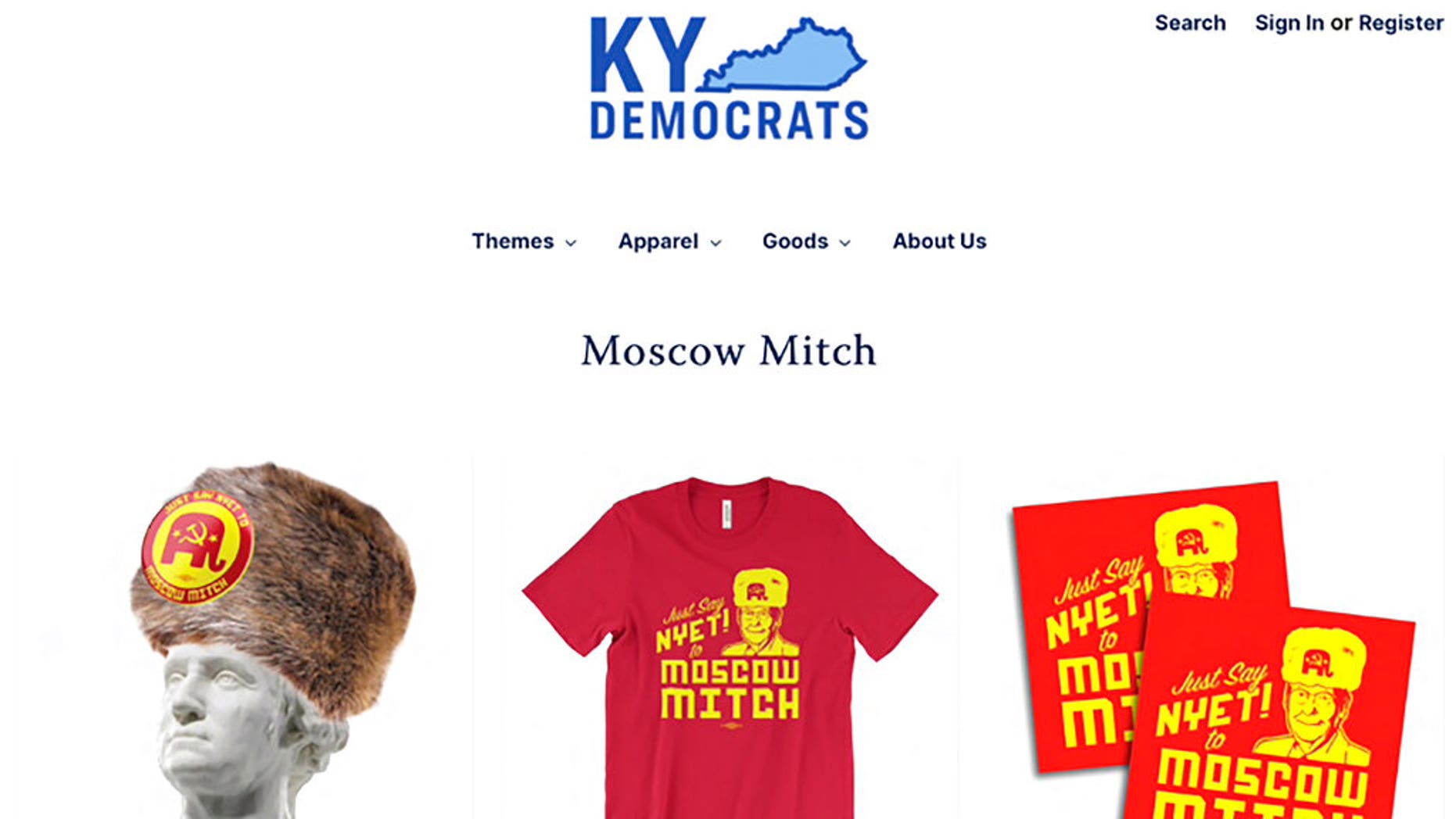 It would be helpful for the Dems to field a top notch candidate to challenge #MoscowMitch next year. Amy McGrath, unfortunately, ain't it. She has no idea what Democrats are for and against and a Senatorial campaign against the majority leader isn't the place to start learning.

McConnell, usually reserved in his response to criticism, likened the insult to “modern-day McCarthyism” which, he added, “is toxic, and damaging, because of the way it warps our entire public discourse.”

I ordered my Moscow Mitch mug today. I was happy to contribute to the Kentucky Democratic Party. I hope they make his life miserable for the next year and a half. Or more.

Our coal miners risked their lives to fuel our country—but Mitch McConnell would only give a group of them with black lung disease a scant minute when they rode 10 hours to visit him in Washington. My question for McConnell: Which side are you on?

I think that was the point.

Thanks. I was not aware of the historical resonance that Which Side Are You On? would have in the context of Kentucky mining disputes. It also gave me a new appreciation for Dylan's Desolation Row.

Sterngard Friegen wrote: ↑Sat Aug 03, 2019 9:37 am It would be helpful for the Dems to field a top notch candidate to challenge #MoscowMitch next year. Amy McGrath, unfortunately, ain't it. She has no idea what Democrats are for and against and a Senatorial campaign against the majority leader isn't the place to start learning.

Sterngard Friegen wrote: ↑Sat Aug 03, 2019 9:37 am It would be helpful for the Dems to field a top notch candidate to challenge #MoscowMitch next year. Amy McGrath, unfortunately, ain't it. She has no idea what Democrats are for and against and a Senatorial campaign against the majority leader isn't the place to start learning.

She was in favor of Judge Kavanaugh's appointment to SCOTUS before she was against him. A politician should pick a position and stick to it. She looks like a ditherer or someone who is ignorant of the issues. In her case, probably both.

This is from RedState (Erick Erickson is long gone, they also removed all negative writers in any manner about Donald). Pretty weak if this is what the GOP has:

The primary election for the Democratic nomination for the United States Senate seat currently held by Majority Leader Mitch McConnell (R-KY) will be held on Tuesday, May 19, 2020, 270 days from now, but that hasn’t stopped Lt Col Amy McGrath Henderson¹, USMC (Ret) from airing campaign commercials. At least so far, she has no announced competitors for that nomination, but I suppose that she’s taking no chances in getting her name out there.

The commercial I saw ran at 7:40 PM EDT today, August 23rd, on WLEX-TV, Channel 18 out of Lexington. The usual reason for such early commercials is to get the candidate’s name out there, to increase name recognition among the voters. That would make sense in the western part of the state, but the Lexington stations were the source for her 2018 campaign for the Sixth Congressional District seat, which she lost.

In 2018, Mrs Henderson outspent Representative Andy Barr (R-KY 6th) by a wide margin, $8,274,396 to $5,580,477, much of it on seemingly unending television commercials and campaign brochures which filled everyone’s mailboxes.² If people in the Channel 18 viewing area didn’t already know her name, they really were just not paying attention.

But, interestingly enough, the commercial I saw today — which I cannot find on the internet, or I would embed it — was criticizing Senator McConnell for not protecting Kentucky’s coal miners and their jobs. Yet if Mrs Henderson does win the seat, and the Democrats take control of the Senate, protecting the jobs of coal miners, or supporting the coal mining industry, is the last thing that the Senate will want to do. Her commercial is, in effect, a lie.

Even though Mrs Henderson announced her bid for the Senate a month and a half ago, her campaign website has no issues page, and tells us nothing about the positions she would take if elected. Indeed, at least as of 8:45 PM today, her website has only a very brief bio, and links to donate to her campaign and a campaign store. Having just finished a political campaign, you’d think that she’d already have most of the website work already done.³

What isn’t kept a secret is how the Democratic presidential candidates feel about coal mining. Senator Bernie Sanders (I-VT) recently released his cockamamie “green new deal” plan, including this gem:

If Mrs Henderson is elected, she will be another vote to give the Democrats control of the Senate. It doesn’t matter what she says about protecting coal miner’s jobs; what matters is what she would actually do in the Senate. In her current campaign commercial, she is lying to us.

That’s it, that’s all it is: an outright lie. And she knows that it’s a lie. “I am further left, I am more progressive, than anyone in the state of Kentucky,” Mrs Henderson said, in a 2018 fundraiser far from the Commonwealth of Kentucky, in very liberal Massachusetts. She never admitted that in Kentucky, but Mr Barr’s campaign found the video. It seems as though Mrs Henderson says one thing in the Bluegrass State, when she’s looking for votes, and another away from our borders, when she’s looking for money.

I'm confused. Is she progressive, or not? I discount anything that RedState says. I understand that she has a primary opponent, What about him?